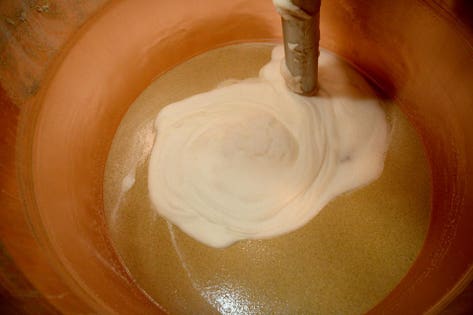 Many wine people like to think our favorite drink was the first beverage alcohol, but maybe not. The two are similar–to a degree. To make wine you use yeast to ferment fruit sugars; to brew beer you use yeast to ferment starchy carbohydrates. Some historians believe the first fermented drink was a kind of beer that made use of the sugars/carbohydrates in human saliva.

Civilized brewing began around the 6th millennium BC. The two most cited locations for early brewing are Egypt and Mesopotamia (Iraq). The practice of course spread throughout history in the Old and New Worlds. In some places, like Peru, saliva still plays a role in brewing.

Even in the United States (US) brewing is among the oldest professions. An historical accounting of US brewing history (at least from 1950) can be had with a visit to the Smithsonian’s National Museum of American History, specifically to the museum’s exhibition, FOOD: Transforming the American Table The permanent exhibit, with an update which begins October 25, 2019, explores the history of eating in the US since 1950. The update includes a few major new sections, one of which is titled, “Brewing a Revolution.”

It may be fitting in today’s US environment that the exhibit tells the story of the important role of immigration, but also of urban development and technological advances on brewing as well as on American consumer tastes. According to the exhibit, the colonists consumed ale, which was largely brewed at home by women. European immigration in the early nineteenth century, especially Germans, introduced professional brewing, and that was the start of an American taste for lager.

Like wine, Prohibition did not completely kill off beer brewing. When the errant thirteen-year law expired in 1933, beer was back on track and roaring into the next decades. The exhibit supports that history with archival material, including artifacts and photographs.

The American Brewing History Initiative began in 2016, funded in part by the Boulder, Colorado-based Brewers Association (BA), with extended funding through 2022. Also funding the initiative are: Warren and Barbara Winiarski (Winiarski Family Foundation), the Julia Child Foundation for Gastronomy and the Culinary Arts, the Land O’Lakes Foundation, the 2018 Food History Gala Supporters and History Channel.

Museum curator Theresa McCulla has been leading the American Brewing History Initiative since 2017. Her research takes her across the country to build stories and collect material, with a focus on the 20th and 21st centuries. She says, “The artifacts featured in this new display convey histories of innovation, creativity and risk, as well as deep pride and pleasure in the processes of brewing and drinking beer in the United States. Beer is a thread that runs throughout the fabric of our nation’s history and culture.”

McCulla recorded oral histories from more than 75 members of the brewing industry; she gathered material to display, including a wooden home-brewing spoon once belonging to Charlie Papazian, past BA president, a microscope used by Frederick Louis “Fritz” Maytag III, grandson of Frederick Maytag (Maytag Corporation) and former owner of Anchor Brewing Company and the travel notebook that helped inspire Kim Jordan and Jeff Lebesch to found New Belgium Brewing Company.

Smithsonian Food History Weekend is set for Nov. 7–9. On Friday, November 8, McCulla moderates a conversation over the history of American craft beer titled, “The Last Call: Brewing History After-Hours.” She will talk with Maytag and Papazian, as well as Ken Grossman, founder of Sierra Nevada Brewing Company; and Michael Lewis, professor emeritus of Food Science and Technology at the University of California, Davis.