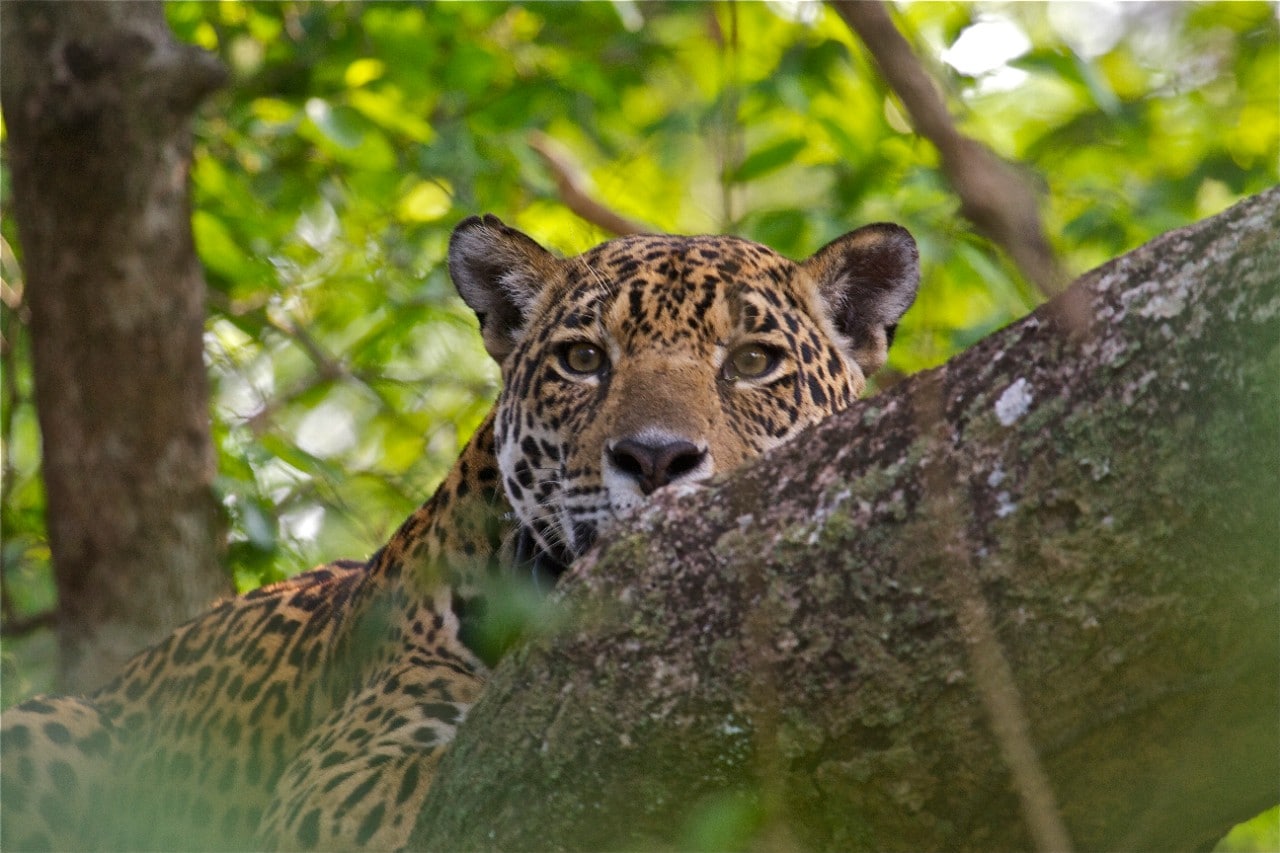 A blur of triumphant rosettes blazing through golden clouds of dust, the jaguar is within paw’s reach of claiming her trophy. Wobbling beneath rolls of fat and fur, a chubby capybara is – admittedly – easy prey in the Pantanal’s brain-sizzling heat. But this is still cause for celebration. Inspired by her mother’s victory, a young cub watching from the sidelines has made her first kill, booting an armadillo into the air with all the gusto of a footballer who’s scored the winning goal.

“I’m so proud,” coos Oncafari’s lead field biologist Lili Rampin, like a parent cheering on her brood on school sports day. And so she should be.

Fera, the cub’s mother, was orphaned after her own mother wandered into Corumba city and was accidentally given a tranquilliser overdose by a vet in a capture attempt. Along with her sister, Isa, she became the focus of a pioneering rewilding project led by Lili and her team at Oncafari.

Housed for a year in a specially built enclosure, the cats were taught survival skills with minimal human contact, until they were ready for release in June 2016. The whole process was filmed by the BBC for the documentary Jaguars: Brazil’s Super Cats, narrated by David Attenborough.

Now, both sisters have cubs, officially deeming the project a success, and Oncafari has blossomed into a powerful voice for conservation in Brazil.

Founded eight years ago by former Formula 3 racing car champion Mario Haberfeld, the non-profit organisation operates within the 130,000-acre grounds of the Caiman Ecological Refuge, a cattle ranch with high-end ecotourism lodges, owned by businessman, conservationist and family friend Roberto Klabin, in the state of Mato Grosso do Sul.

A three-hour drive from Campo Grande airport, it sits in the Pantanal, an expanse of wetlands and savannah, bigger than England and home to 80 per cent of the world’s jaguars.

“I always knew I wanted to work in conservation when I retired,” says mild-mannered Mario, 43, during a game drive in one of Oncafari’s research vehicles – a package guests can book in addition to their stay at Caiman. “But I had no idea how.”

Having fallen in love with Africa at the age of 12, he returned multiple times, but it was a visit to Londolozi private game reserve in South Africa that gave him the idea for jaguar habituation – acclimatising cats to the sound of vehicle engines to allow better sightings.

Despite his pedigree – he once raced for Jackie Stewart and rubbed shoulders with the Duke of Sussex – Mario initially struggled to secure a government licence for his project, but he claims differences between the two vocations aren’t so great.

“Non-profits are in some ways similar to racing cars: they live out of sponsorship and donations,” he explains. “I have a 20-year background of seeing how that works – trying to make sure your sponsors are happy, wearing uniforms, communicating to the general public.”

A true visionary, Mario was humble enough to recognise his shortcomings. Having grown from one, Oncafari now operates with a board of 13 decision-makers.

“In life, you don’t need to know everything,” he smirks, as we stop beneath a tree where Fera is sleeping in a tangle of branches above a gaggle of white-lipped peccaries sweeping the forest floor for fruit. “You just need to know people who do.”

When Mario enjoyed his first fleeting glimpse of a jaguar in 2010, it was only the second time in decades that Roberto had seen one on the farm. This year alone, 98 per cent of guests have spent time with a big cat, and next summer the BBC are coming to film for Planet Earth III.

There are currently 10 collared jaguars on the property, but around 60 individuals are estimated to frequent the area, their movements monitored with camera traps. Using an antenna, we’re able to track down Gaia, who’s nestled in the hollow of a fallen tree trunk, its roots splayed like sunbeams. And later that night, when ponds twinkle with constellations of caiman eyes and the sky becomes a creamy arc of galaxies, we find Fera and her family feasting on a carcass.

Of course, collars aid ecotourism, but that’s not their main purpose.

“We were probably the most criticised jaguar project in Brazil when we launched,” complains Mario, when we arrive at a lively churrascaria of sizzling meats and toe-tapping country rhythms – one of several “surprise” outdoor meals Caiman organises for its guests. “Scientists said we were domesticating animals and putting collars on just for tourists to see them.”

But data amassed by the team on the world’s least-researched big cat has since become highly desirable, generating several scientific papers. Lili even claims collars have saved the animals’ lives, deterring aggrieved farmers from illegally shooting any trespassers on their land for fear of being caught by authorities.

Oncafari’s reach, however, extends beyond science, and Mario believes a Facebook post is just as valuable as an academic article. His aim is to inspire the masses and he’s succeeding: fine jewellery maker Alessandra Schiper has designed exquisite emerald-eyed rings in honour of Isa and Fera, with a percentage of profits donated to Oncafari; while numerous artists have enthusiastically lent support to Brazil’s first Jaguar Parade in Sao Paulo, with 100 sculptures to be auctioned on Nov 29, International Jaguar Day.

Proving that ecotourism can be an economic success, the team has created a blueprint for wildlife conservation in Latin America. Currently resident in their enclosure, shy male Jatobazinho will be released into Argentina’s Iberá wetlands early next year, part of a long-term rewilding project overseen by Tompkins Conservation. At the other end of the continent, the Belizean government has requested assistance to develop jaguar tourism.

But right now, Mario is absorbed by his latest venture: Oncafari Forest.

Flying into Alta Floresta, 930 miles (1,496km) north, we thump and clatter over potholed roads on a three-hour drive into the state of Para – although I suspect it would take double that time if we didn’t have a racing driver at the wheel. Open farmlands denuded of trees are soon replaced by Amazon rainforest, where silence is broken by an excitable symphony of bird calls and the air tastes moist and sweet.

Last June, after authorities contacted Oncafari, two orphaned jaguars were introduced into a new enclosure close to the Sao Benedito River, and rewilded in pristine forest owned by the military.

“It was slightly different with Pandhora and Vivara,” explains Mario when we arrive at the simple Pousada Thaimacu fishing lodge, where Oncafari has a permanent research base. “They’d been bottle-fed and were used to human contact, so we travelled five hours upriver to release them far away from people.”

Both collared, the sisters are closely monitored. For now, this is purely a science project and the team has recently been authorised to collar more Amazonian jaguars for research.

Eager to protect the area, they’ve also started buying up land along the riverfront – a poignant exercise given what’s happening in the northern Amazon. While smoke from the raging forest fires hasn’t drifted this far, a black cloud still hangs in the air. In Brazil alone, Amazon Watch reports that an estimated 7.4 million acres of rainforest have burned – an area the size of Belgium, and President Jair Bolsonaro’s disregard for the environment is causing anger and alarm.

Motoring upriver, where boisterous giant river otters engage in ferocious play and blue-and-yellow macaws peel from trees like falling blossom, we erect metal “No Trespassing” signs on the 15,000 hectares purchased by Oncafari so far.

So does the future of Brazil’s environment now rest with philanthropists?

“It would be impossible to buy up the whole country,” sighs Mario. “But hopefully we can set up a model and convince the government of the importance of national parks, because at the moment they are pretty much abandoned.”

Cooling off with a swim, we stop at a creek winding into the military area. Combined with two neighbouring indigenous reserves, it represents 12.3 million acres of untouched, protected land. A scale hard to imagine in our developing world, it sounds like fantasy.

“Where else can you find somewhere like this?” muses Mario, diving into crystal-clear water where shoals of fish create rainbows and reeds flow like mermaid’s hair.

Recognising a need for early intervention, no-nonsense conservationist Vitoria Da Riva Carvalho established the area’s first private reserve (RPPN) in 1997, across the border in Mato Grosso, next to Cristalino State Park. Set aside in perpetuity for the purpose of preserving the environment for future generations, it’s a magnificent sprawl of diverse ecosystems, where countless new species of flora and fauna have been found.

Overlooking a black water river, Cristalino Jungle Lodge is a collection of bungalows built unobtrusively into the heart of the forest. Banana plants and heliconias create an interesting  permaculture sewage system, and energy is largely generated by solar panels.

But it’s the extreme biodiversity that really makes this place special. On a sunrise canopy tower climb, I’m dazzled by the vibrant plumage of blue-spangled cotingas and deafened by red-throated piping guans who splutter through the morning mist like the tired engine of an old banger; while guided forest trails reveal statuesque 800-year-old Brazil nut trees and palms with needles that play a melody when strummed.

The wealth of natural wonders is a reminder of what’s already been destroyed. Wildfires have always affected Brazil in the dry season, but it’s the rate of acceleration that’s hard to control, and with climate change now a reality, the situation will get worse.

A week after my visit, a combination of searing temperatures, low humidity and high winds causes fires to rip through the Pantanal, burning 60 per cent of Caiman’s grounds. It barely makes the UK press, but a state of emergency is declared.

Roberto Klabin is philosophical when we speak on the phone. Operations at the lodge have resumed and green shoots are sprouting from charred embers. Although it will take months to assess the long-term impact, it appears most wildlife has survived.

“In Brazil we have a saying: if you have a lemon, you need to make lemonade,” he laughs.

But of all the lessons learned, one stands out: “You don’t fight fire with water; you need people digging out stumps still burning underground.”

His words have a double meaning: there is no superficial solution to problems with far deeper roots. Understanding potential loss requires appreciation of what we have. Fail to do that and we are playing with fire.

How to do it