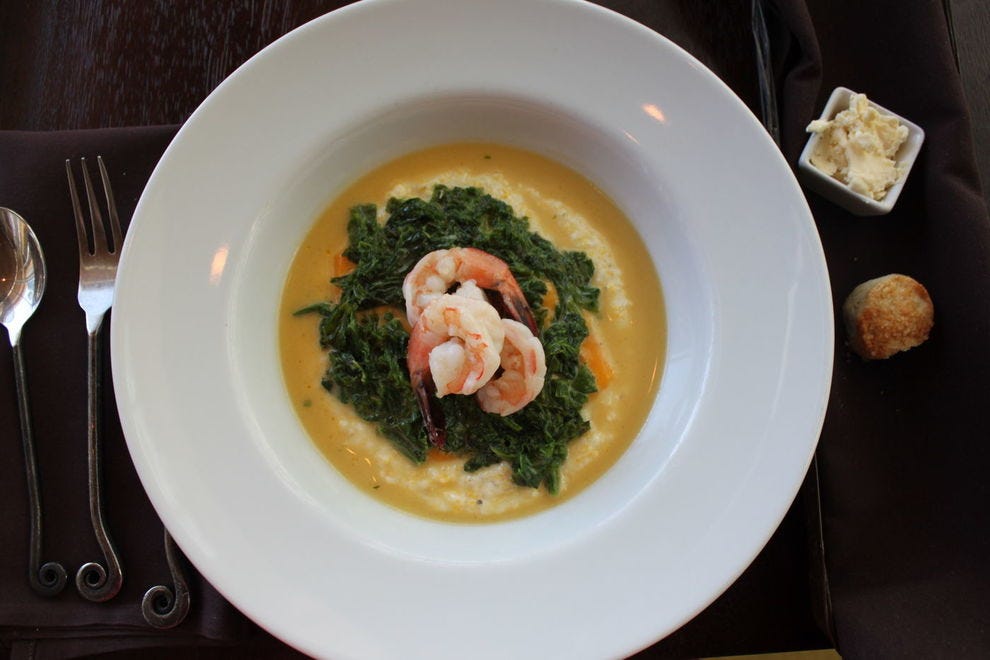 Shrimp and grits at Halcyon — Photo courtesy of Caroline Eubanks

Perhaps the ingredient most associated with Southern food and an important staple in breakfast dishes, grits are polarizing if you’ve never had them. The dish is actually made of ground corn kernels called hominy.

Often incorrectly described as “savory oatmeal,” its closest relative is polenta. But it’s also similar to congee, a rice porridge found in a number of Asian countries, and ugali, an African dish made from cornmeal.

The history of grits 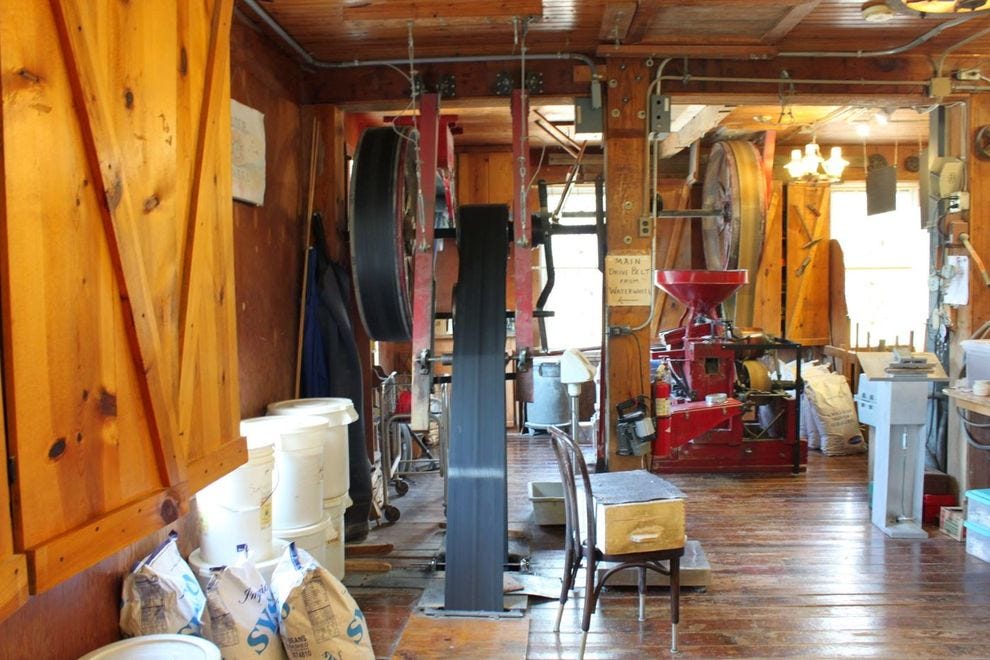 Corn has been a significant ingredient in American food since before European arrival. In the 1600s, the London Company arrived in Jamestown, Virginia and were received by a group of Native Americans, offering them a softened maize dish with salt and fat. It was called “rockahominie,” later shortened to hominy.

The name “grits” became shorthand because of the texture of the dried corn. After the Civil War, grits became a diet mainstay and water-powered gristmills worked to grind corn, the king crop. It was relatively inexpensive and could be eaten with almost anything, making it possible for everyone to enjoy.

“For much of the past century, grist mills were small town fixtures, humble buildings set hard by the town creek or river, where folks from the surrounding countryside brought their wheat and corn, rye and oats to be ground into meal. Most everyone lived within a morning’s wagon ride from their local mill,” wrote Southern food writer John T. Edge in his book “Southern Belly: The Ultimate Food Lover’s Companion to the South.”

While the technology has changed since then, much of the process carries on how it has for generations throughout the South. There are a number of gristmills that still grind the corn kernels into cornmeal, providing grits for restaurants nationwide.

The styles range from “mass-produced instant, quick or flavored grits that many, many people (especially in the South) purchase at the grocery store,” writes Erin Byers Murray in “Grits: A Cultural and Culinary Journey Through the South.” But there is also a growing share of artisanal grits sold in farmers markets and gourmet grocery stores.

Gristmills you should check out 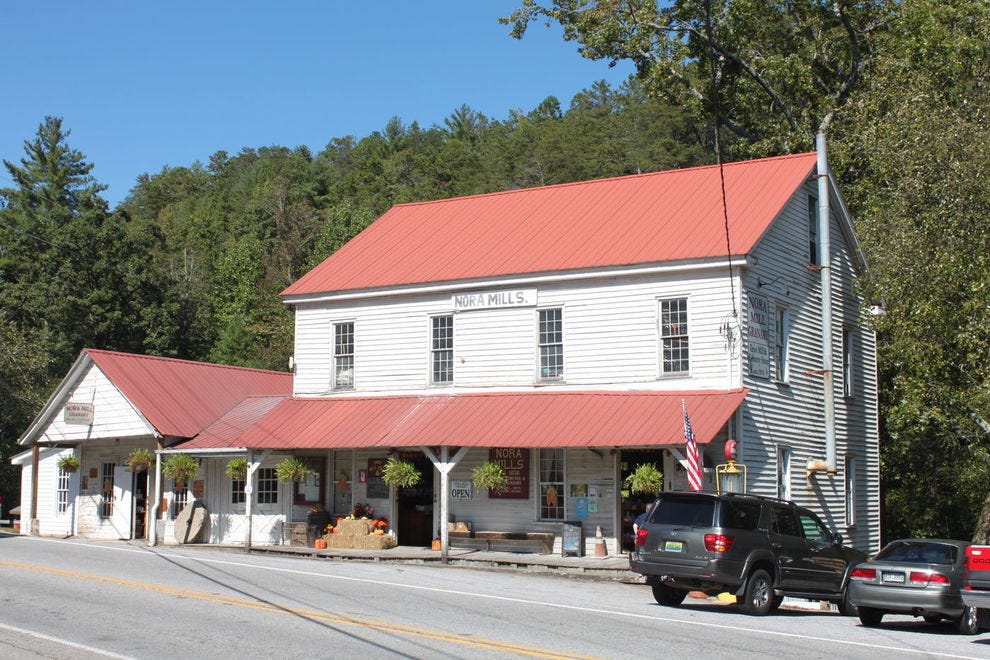 War Eagle Mill in Rogers, Arkansas was established in the 1830s and went through three incarnations before its current one, constructed in 1973. It’s been family-run ever since, spanning the War Eagle River in a red clapboard building. Visitors can see the water wheel and gears that create the product, which is served in their upstairs restaurant.

Anson Mills of Columbia, South Carolina has become a chef favorite. Owner Glenn Roberts grew Gourdseed heritage corn to mill, a style that dates back to the 1600s.

Over at Geechie Boy on Edisto Island in South Carolina, the barrier island’s gristmill has become the preferred supplier of Charleston restaurants. The Johnsman family started the mill in 2007 as a way to supplement their farm income, and they use heirloom corn without any preservatives. Their grits are featured on menus throughout the region, including at Halcyon in Charlotte, North Carolina.

Nora Mill Granary in Helen, Georgia dates back to 1876 when an aspiring gold miner moved to the area. It sits on the Chattahoochee River, which runs through the state. They still use 1,500-pound stones to grind hominy and sell their grits in the neighboring country store. 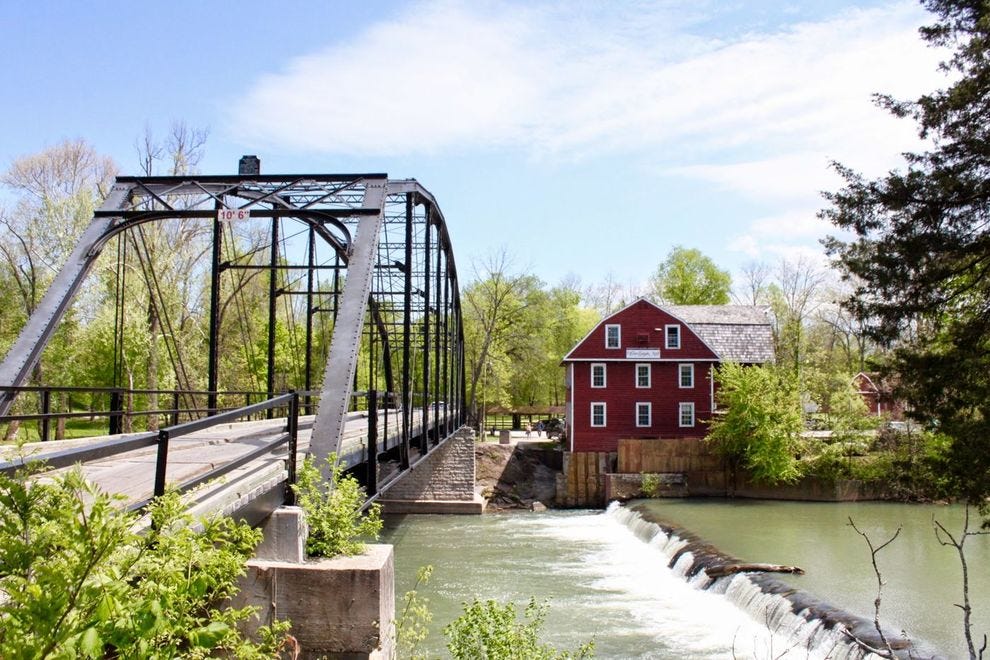 Grits are usually cooked with water, cream and butter over the course of many hours. They can be varying textures from smooth to grainy. There are even instant grits for those without the hours to cook down the hominy. Worth noting is that sugar is not typically added and some consider it blasphemy.

Grits can be served for breakfast, lunch and dinner, but they’re commonly used as a base, usually topped with seafood and a delicious sauce. It’s a dish eaten by everyone from sitting presidents to blue collar workers in a variety of ways, both in fine dining restaurants and greasy spoons.

Shrimp and grits is the most well-known dish incorporating grits, especially in coastal areas like Charleston, South Carolina. It was originally a fisherman’s breakfast, a hearty meal before a long day of work, and today, it’s found on menus throughout the nation.

Ham and grits with red eye gravy is another favorite dish, in addition to grits being served in casseroles and in grits cakes, similar to arancini.

Chefs have also become creative with the dish, putting a modern spin on the traditional. Chef Mashama Bailey has a foie gras and grits dish at The Grey in Savannah, Georgia. Chef Edward Lee has prepared it like the congee his Korean parents cooked growing up, but utilizes Kentucky’s Weisenberger grits. Nathalie Dupree has made her career on the dish with her cookbook titled “Shrimp and Grits,” while Virginia Willis has the appropriately titled “Grits.”

If you have the chance to visit the South, give grits a try. When prepared correctly, they take on the best flavors of the region.

What to eat and drink in South Africa
How I travel… with explorer Sir Ranulph Fiennes
Ntsiki Biyela, Founder Of Aslina Wines And One Of South Africa’s Young And Very Talented Winemakers
A Family Wine Estate Lost While Dealing With Father’s Alzheimer’s
16 Travel Hacks That Actually Save Money