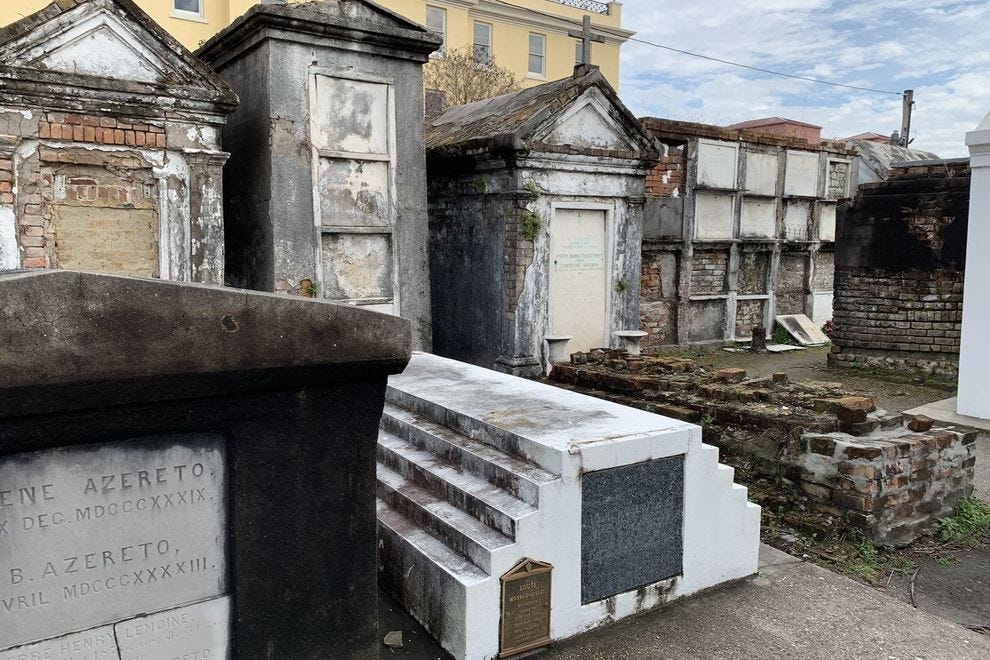 New Orleans is known for its elaborate and ornate cemeteries, with more than 40 located within the city limits. Assuming you have more than just “visit cemeteries” on your NOLA to-do list (like maybe trying some of the city’s classic cocktails), you might need help narrowing down the options.

With this in mind, I reached out to experts, Save Our Cemeteries, for help in determining which cemeteries should be on your short list. Save Our Cemeteries is a New Orleans-based 501(c)3 non-profit working to “increase the public’s interaction, appreciation and enjoyment of the architectural, historic, and cultural value” of the city’s cemeteries.

They accomplish this goal through hands-on work repairing vandalized vaults, repairing and stabilizing tombs and organizing beautification projects in local cemeteries throughout the year. Additionally, they work with the public to increase education through lecture series and riveting walking tours led by highly educated, licensed professional tour guides who are passionate about both their city and their cause.

Here are 10 cemeteries that not only showcase the diversity of the various burial grounds but also touch on the unique history and culture of the city.

The location of the city’s oldest, still existing cemetery was selected because it was far away from the center of the population. Today, it sits just on the edge of the French Quarter and is now the city’s most conveniently located cemetery.

St. Louis I, established in the late 1700s, is a great introduction to the city’s cemeteries as there are examples of the many different types of burials, ranging from wall vaults and coping graves to massive society tombs. Homer Plessy of the Plessy vs. Ferguson case is buried there, along with many other notable individuals and families.

St. Louis I is also where actor Nicolas Cage has had a bone white pyramid tomb erected for his future burial, and is believed to be the final resting place of Voodoo Queen Marie Laveau. We’ll let you decide which of the two is creepier.

Conveniently located just off the streetcar and within walking distance of many other stops on this list, Cypress Grove Cemetery was established in 1840 by the Firemen’s Charitable and Benevolent Association as a place to honor the men who “gave their courage and, sometimes, their lives to protect their neighbors.”

In addition to honoring these heroes and their loved ones, Cypress Grove gained popularity as a burial spot for non-Catholic members of the community. Many well-known individuals are buried here, including at least four mayors and the man responsible for bringing gas to New Orleans and lighting the city.

Most unique to the cemetery, however, is the Chinese Tomb. Dedicated in July 1904, the tomb, large enough to walk into, includes a small fireplace and altar for burning sacrifices and offerings. It is believed that the tomb was built to serve as a temporary resting place for remains to be interred until arrangements could be made to have the deceased transported to a permanent tomb in China.

Fearing that the unpleasant smell and vapors exuding from the burial grounds at St. Louis I were spreading diseases, city officials decided in 1820 that they needed to establish a new cemetery even further from the city center. The new location, less than 1,800 feet from the first, spans three city blocks and, unlike the first, is well organized with clear rows and pathways.

On the National Register of Historic Places, St. Louis II is where many noteworthy individuals were buried, including jazz musicians, pirates, politicians, soldiers and young victims of the many vicious diseases and epidemics that raged through New Orleans.

One of the more peculiar sites in St. Louis II is the tomb of Alexander Milne. Milne was a highly successful businessman who left instructions for the majority of his fortune to be used to open both a boys’ and girls’ orphanage. Fearing his wishes would be ignored, Milne had this portion of his will engraved on his tomb.

Two other individuals who are worth learning more about and paying respects to are Oscar James Dunn, the United States’ first African American Lieutenant Governor, and Paul Barbarin, a beloved jazz drummer.

The Charity Hospital began using this land, previously known as Potter’s Field, in 1848 as a burial ground for unclaimed bodies, many of whom were victims of yellow fever and influenza epidemics. More recently, the remains of individuals who donated their bodies to local medical schools were also buried here.

In 2009, the city completed construction of a memorial to the victims of Hurricane Katrina. It is here that the unclaimed and unidentified victims of the storm were laid to rest. In addition to the mausoleums, there is a monument dedicated to all who suffered or lost their lives and a labyrinth created in the shape of a hurricane symbol. This pathway is designed to encourage meditation and healing for visitors.

After the yellow fever epidemics of the early 19th century, St. Louis II was filling up pretty quickly and the city acknowledged the need to acquire more land for burial grounds. By the 1840s, a plot was obtained to serve as St. Louis III and was then added to after the archdiocese purchased the adjoining land, post Civil War.

Just like its predecessors, St. Louis I and II, St. Louis III has a fascinating combination of both personal and society vaults. But there are many aspects that make St. Louis III unique, including that St. Louis III was formerly the site of a leper colony and cemetery.

Tombs of note include the Priest’s Tomb, where priests whose families did not or could not make other arrangements were laid to rest, and Aristide Mary, a wealthy philanthropist who helped to fund the Plessy vs. Ferguson trial.

Holt Cemetery is unlike any other cemetery you’ll visit in New Orleans. Holt began as a burial ground for the indigent population, providing below-ground burial plots for simply the cost of digging the grave.

In contrast to the city’s many iconically ornate cemeteries, at Holt, families are given the freedom to creatively honor their loved ones, often identifying the burial site with homemade grave markers.

Holt has an unpretentious, folksy feeling to it. There are no tombs, the grass is often overgrown and graves are outlined, if at all, with non-traditional items like PVC pipe and cinder blocks. But those who take the time will observe that Holt is a place where love is shown creatively and authentically.

Due to the lack of clear markers, it’s not always easy to know who is buried at Holt or where, but it is known that Buddy Bolden, the “founding father of jazz,” is buried here in an unmarked grave alongside countless war veterans. Monuments to both can be found on the grounds.

But the Spanish government decided it was time for the city to expand. After making plans for a new above-ground cemetery (St. Louis I), the government chose to ignore the concerns of the Catholic Church and many citizens and began their expansion right on top of the burial grounds.

Even though you can no longer see signs of the actual cemetery, it’s worth a visit to try and spot the remaining early 19th century buildings from this controversial expansion and pay respects to the first residents of New Orleans still buried beneath.

Lafayette Cemetery, located in what has become known as the Garden District, dates back to 1832. More than 7,000 people are believed to have been buried within the 1,100 family tombs here. Lafayette, the oldest of the city-operated cemeteries, is non-denominational, and is the final resting place for individuals who came from all around the world and country to settle in New Orleans.

As is the case with cemeteries all across the city, many notable individuals and families were buried here. Lafayette, however, is most well-known as the inspiration for author Anne Rice’s “Vampire Chronicles” and for scenes in “Double Jeopardy,” “Dracula 2000” and a New Kids on the Block music video.

On the National Register of Historic Places, the Metairie Cemetery is one of the city’s oldest and most historic burial grounds. This former race track was converted into a cemetery after the Civil War and was designed to bear a resemblance to more rural cemeteries. Consequently, Metairie feels more spread out than the rest of New Orleans’ cemeteries and offers more green space.

While exploring, be sure to keep an eye out for the Moriarty Monument. Despite becoming quite wealthy, Daniel Moriarty and his wife, Mary Farrell, were often looked down on and snubbed by the upper society for being self-made. After Mary’s death, Daniel decided to commission an 80-foot granite memorial so that Mary could look down on everyone in the cemetery for all eternity.

In 1868, during a yellow fever outbreak, Father Peter Leonard Thevis encouraged his parishioners to pray for the intervention of Saint Roch. In his prayers, Father Thevis vowed to build a chapel in honor of St. Roch if his congregation was spared.

It is said that not one member of the church died and so he began working on plans for St. Roch Chapel. The plans included a burial ground which started in 1874, while the chapel was completed and dedicated in 1876.

Today, St. Roch is a popular pilgrimage spot for those looking for healing of various ailments or coming to show appreciation for healing. Take a peek inside the windows on the right side of the chapel for a glimpse at many offerings symbolizing these prayers.

When planning your trip to New Orleans, keep in mind that some cemeteries are off limits without a tour guide or can be closed for maintenance or upkeep. Both tour and closure information can be found on the Save Our Cemeteries website.