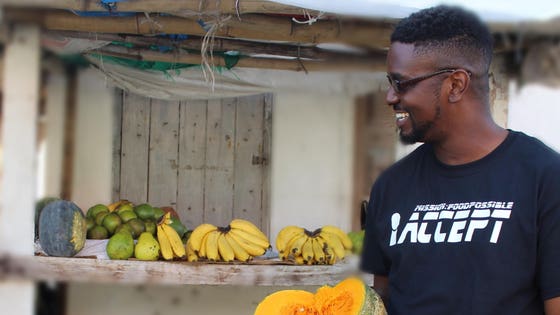 Barbados’ Prime Minister, the Honourable Mia Amor Mottley recently challenged the Caribbean to slash its annual US$4 billion food import bill by at least a quarter over the next five years. She argued that in the face of climate change and population growth, Caribbean food security is not just a health and nutrition issue— it is a national security issue.

Given the expected increase in climate change-induced severe weather events that place the Miami-Caribbean food supply chain at risk, coupled with the resource pressure of 767.5 million people that are projected to be living in the LAC region by 2058, locally grown and produced food is critical to the region’s future. But with its near exclusive reliance on food imports, the resurrection and redefinition of the rapidly declining agriculture sector is not just a challenge but also a strategic priority.

Farming, prior to the introduction of agricultural technology was indeed an arduous profession, and in the absence of innovation, it has historically been a risky business. The region’s youth have, for the most part, deemed agriculture as a non-viable career option, causing employment within the sector to decrease significantly between 2000 and 2018 (International Labour Organization). St. Lucia experienced a significant decline from 21.07% of total employment to 15.3% of total employment and Trinidad experienced a similar decline, from 7.22% to 3.6% during this period.

The “whys” for rebranding agriculture abound. For one, the target market has changed— not only have the demographics of consumers changed but so have the producers. Farmers are no longer old and poor. Technology, science and fashion have infiltrated the food and agriculture sector and with these changes has come a degree of sophistication that has not only enabled agriculturalists to be resilient in the face of climate change, but to do so profitably. It is no accident that Snoop Dogg and Irish model, Vogue Williams were recently enlisted as agriculture brand ambassadors.

The time has come for the revolution to find its way to the Caribbean. Rebranding techniques that have typically been used in the businesses world should be strategically incorporated in the repositioning of the sector. Repurposed corporate branding tools, as opposed to government policy making, just might be the answer to the region’s food security issues.

Some possibilities are as follows.

Trinidadian agriculturalist, Alpha Sennon, has become a globally recognized thought leader in the area of “agripreneurship”, securing global support and recognition from the Kirchner Foundation, among many others. International soca artist, Machel Montano has become an active supporter of Trinidad’s cocoa industry, launching his own brand of organic chocolate. Barkha Mossae, a World Economic Forum Global Shaper refers to “agricultural workers, farmers, and labourers the superheroes of the planet, since they will be directly contributing to the survival of humanity by providing food.” Agriculturalists have the potential platform to be the new influencers and thought leaders and regional celebrities must be enlisted as brand ambassadors of the sector.

“Location or geo-based food branding is big business,” says Ron Johnson, Co-founder of Blueprint Creative, one of the Caribbean’s leading branding agencies. “For countries cashing in on location-based food branding, protecting the integrity of their food crops is serious business.” Geo-based food branding also gives Caribbean nations the added opportunity to shift their focus from just crops to secondary products, opening the door to cottage industries, food innovation and the evolution of local dishes and dining.

Regional initiatives such as Slow Food, Whyfarm and Mission:FoodPossible provide fun, activity-based agricultural education to students in primary and secondary schools. “An agriculture rebranding must start with the youth,” says Alpha Sennon, the Founder and Executive Director of Whyfarm, a Trinidad-based Agriculture NGO. “The best way of doing this is through the arts. Whyfarm uses ‘edutainment’ to depict agriculture as ‘agricoolture’ and superheroes, Agriman and Photosynthesista, are Whyfarm’s agricultural ambassadors.”

4.    Create stronger linkages between agriculture, food experiences and food tourism.“Agriculture is one of the most basic expressions of humans’ ability to turn spaces into places, and places are where culture thrives,” says Trevor Jonas Benson, Vice President of Destination Development at the Culinary Tourism Alliance. “This means farmers are the original place makers. It also means that tourism experiences that focus on agriculture, or agri-tourism experiences, are the most raw expressions of culture and place and are more frequently sought out by the most sophisticated travellers.”

Barbados’ Prime Minister stresses that agriculture must “attract technological solutions and innovation. In a land scarce country [such as Barbados] our future in agriculture must be based on a vertical yield.” Technology-driven solutions such as vertical farming provide an alternative to traditional agricultural techniques that reduce soil quality, promote deforestation and disproportionately expose farmers to climate events. By enhancing efficiency, raising yields and by reducing risk and exposure, technology improves the value proposition of agriculture, resulting in the obsolescence of the outmoded plantation model of agriculture.

It cannot be overlooked that Caribbean agriculture is historically rooted on the plantation. Given the deep-rooted legacy of slavery, farming and oppression share an ideologically interconnected relationship and modern-day references to agriculture continue to conjure images of cutlasses, hoes and prayers for rain. These associations do not serve the national security interests of the Caribbean region— the time has come for a revolutionary shift in the positioning of the sector. A “corporate rebranding” might just be the solution.

Welcome To The Year Of Yaupon Tea
In New Cookbook Dietitian Maya Feller Highlights Healthy Meals From Around The World
Meet the Hendo behind Hendo’s Hideout in the British Virgin Islands
Luxury stocks rally from China reopening, but world’s largest luxury market may choose to shop ‘in-house’
Savor The Flavors Of The NoMad Hotel London