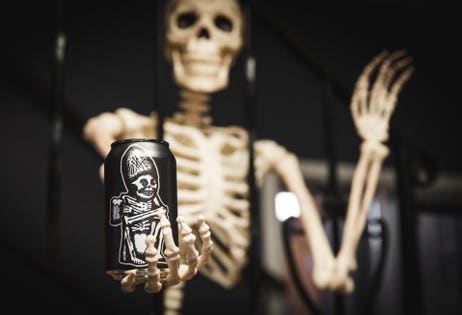 As Halloween approaches, finding the perfect beverage to enjoy on what some believe to be the spookiest night of the year can be a feat. Whether imbibing during a quiet night at home or while celebrating the night with guests, it’s an added bonus to grab a can or create a cocktail that perfectly complements the occasion.

Some beers, wine and spirits, however, have backstories with somewhat spooky or even downright chilling roots. Others come with interesting labels or just pair well with the inevitable haul of Halloween candy. Read up and then drink up.

From Rogue Ales, Dead Guy Ale was originally made for a now-defunct Tex-Mex restaurant in Portland, Oregon. The restaurant, says Dharma Tamm, founder of Rogue Ales, had the beer specially created to use as a house beer for Dia de Los Muertos. The ale ended up with such a loyal following that the brewers realized they needed to keep pumping it out.

“Dead Guy is enjoyed 365 days a year by beer drinkers around the world, but there is no better time to crack open a Dead Guy than this time of year,” he says.

Brewmaster Joel Shields notes that the beer is Maibock-style ale with a robust malt profile and a sweetness that is balanced by the liberal use of bittering hops.

“The sweet caramel malts and balanced hops in this beer pair great with caramel and toffee candies such as Heath Bars,” he adds.

Made in Bermuda, dark rum itself seems to conjure up images of the spirit of the rum trade — dark and stormy nights and pirates afoot.

Building off that is the company’s signature cocktail, the Dark ‘n Stormy, which sounds — and tastes — just as thrilling as the introduction to almost any horror story.

And if going for a black and orange-ish vibe at a party, Gosling says a rum swizzle also makes an easy batch cocktail that is also on-brand for Halloween.

If skipping the cocktails and sipping on some Black Seal neat or on the rocks, Gosling adds that pairing it with a Cadbury Crunchie Bar would be his pick.

“The chocolate and honeycomb combination works well with the treacle and molasses notes found in our Black Seal,” he says.

According to Katie Nelson, senior director of winemaking, innovation at Ste. Michelle Wine Estates, Prayers of Saints 2018 Chardonnay is light, crisp and refreshing with a touch of softness, which allows it to pair perfectly with candy corn or popcorn balls.

Prayers of Sinners 2017 red blend, however, is a broody red wine is deeply layered with blackberry, dark fruit, violet and cocoa.

“The rich textures in this wine pair decadently with the range of flavors in a Snickers or Twix bar where there is a touch of salt to balance the sweetness. The peanut in Snickers and the biscuit in Twix help bring out the dark fruit and cocoa undertones in the wine,” Nelson says.

And Prayers of Sinners has an extra spooky surprise — the label glows in the dark.

From Allagash Brewing, this limited release is as black of a porter as they come. The beer has a roasted flavor, is hopped with crystal, chinook, and saaz hops. The company notes that Haunted House “ends with a ghost of coffee-flavored bitterness and hauntingly complex malty palate.”

And can you have Halloween without a Haunted House? The answer from beer drinkers is seemingly “no,” as this beer has been returning seasonally since 2015.

No Halloween beverage list can be complete without The Prisoner. The haunting labels that grace store shelves every day seem to sent a chill up the spine when associating it with the scariest night of the year.

“With enticing labels featuring works of Goya on our red blend, The Prisoner, or bottle dipped in wax, partly obscuring the face of the intriguing character who lies beneath on our Eternally Silenced pinot noir, our wines are great to bring as a hostess gift or to enjoy while decked out in your best costumes,” says Chrissy Wittmann, director of winemaking for The Prisoner Wine Company.

If you’re just looking for the perfect sip that goes with just about any candy on the table, look no further than bubbles. Martini & Rossi Asti DOCG has notes of grape and vine peach melon which, combined with its effervescence, makes it a perfect pairing.

“The wine’s fruit flavors shine through even when paired against sweet treats like candy corn or a rich nougat based candy with a smooth chocolate coating, like a Charleston Chew,” says Giorgio Castagnotti, winemaker for Martini & Rossi.

Conjuring the spirit of mystery — as the word suggests — Apothic has a selection of wines that can help make Halloween as spooky as it is tasty.

The brand’s Inferno is a fiery red blend that delivers a unique and unexpected taste. An intensive oak aging process, including 60 days in whiskey barrels, enhances Inferno’s rich character. The spirit-infused wine is said to pair best with Milky Way bars.

Newly-added to the Apothic portfolio is its sparkling red wine. With Snickers as the ultimate bite, the wine’s deep, rich color perfectly match the darkness of Halloween while bubbles celebrate the special occasion.

13 top free things to do in Hawaii: how to see the islands for less
Reasons Why People Hate Airbnb Now
First-timer’s guide: There’s so much more to Pittsburgh than steel
Where To Celebrate New Year’s Eve In New York City
An expert guide to ski holidays in Crans-Montana