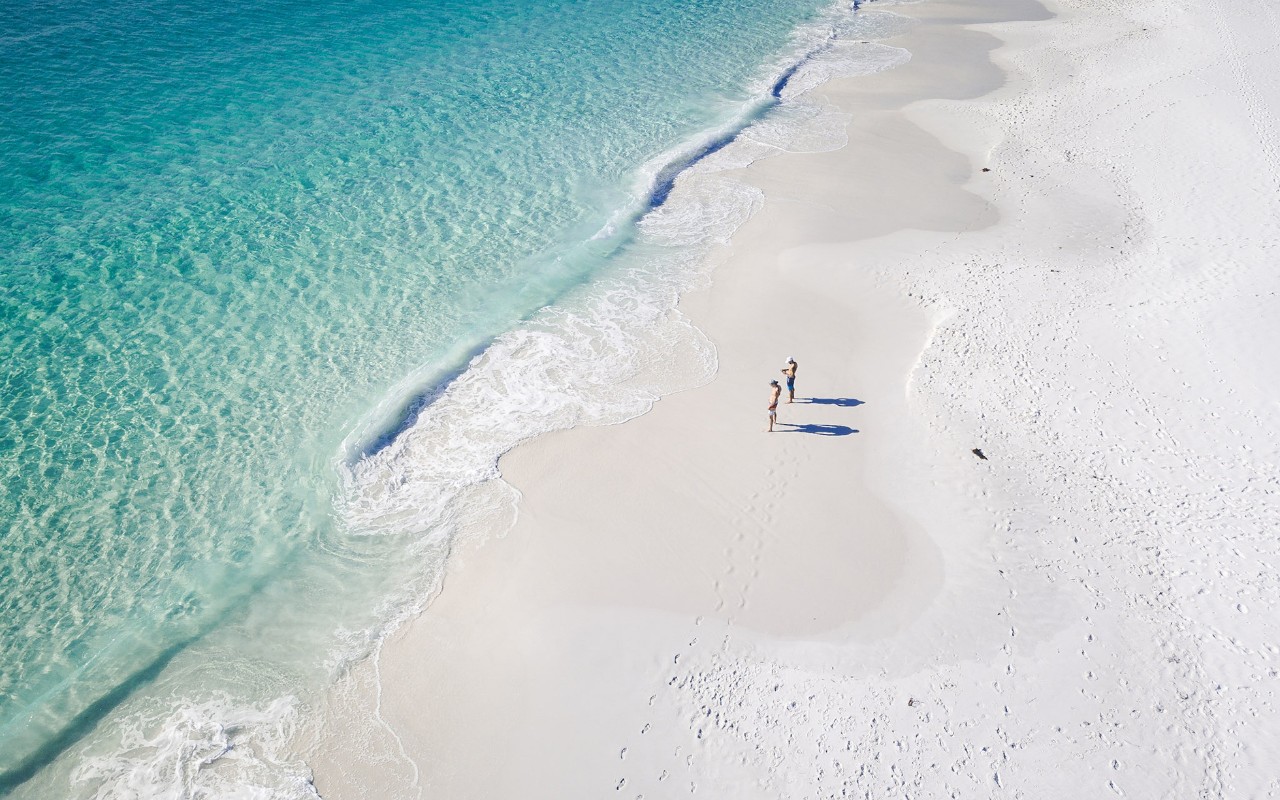 Nevertheless, it is a beauty. Eighty-five miles from Sydney, Hyams Beach is bordered by Jervis Bay and Booderee National Parks, and its fine sand is kissed by turquoise water. Dolphins sometimes come to play. It is a magnificent spot, its tranquility framed by rugged bushland. So it was only a matter of time before Instagram spoilt it.

Jervis Bay has parking capacity for approximately 500 cars, and there is only one road in and out of town. In peak season, up to 4,000 cars try to gain access. In summer, the roads are often closed and visitors turned away.

“Locals got so tired of tourists parking and blocking access to their homes that they would get up early to park across their own driveways and then charge visitors to park in their spots,” one resident told me. The beach has been damaged by tourists pushing into the dunes to find shade (and the perfect Insta-shot) and leaving behind rubbish.

Yes, it’s a beautiful beach. But it’s not the only one. The Shoalhaven coastline, to which Hyams belongs, has so many white sand beaches it’s practically giving them away. And the area is more than just pretty beaches. This is Australia’s Oyster Coast and home to a thriving food and wine scene, enhanced by celebrated chefs like Rick Stein, who opened Bannisters in Mollymook a decade ago. Here’s how to make the most of the region.

The #100beachchallenge, an initiative by the local tourist board, encourages visitors to uncover lesser-known beaches in the area. Its pick is split into different categories, including best for families, camping by the beach, surfing, secret beaches, best Instagram spots, and whitest sand, but Blenheim, Collingwood, Murrays and Greenfield are among my favourites.

Stand-up paddleboarding might look hard but trust me, it’s not. If I, with my flat feet and can-we-have-coffee-now approach to outdoor activities can hack it, anyone can. The beaches of Jervis Bay are known for calm, clear water and an abundance of marine life. Jervis Bay Stand Up Paddle takes groups on guided trips, pointing out sights and wildife both above and below water. “You might be lucky enough to catch a few dolphins feeding today,” my guide told me at Orion Bay. As if on cue, around 20 broke through the calm surface of the water to greet us.

Learn about indigenous history and culture at Booderee National Park

Booderee means ‘Bay of Plenty’ and the area within the National Park is home to a diverse array of flora and fauna, including several endangered species. There aren’t many people who know more about the area than Julie from Galamban Tours. Around a campfire overlooking the ocean, she told us of the history of the indigenous Wandandian people, while her son Clive served up traditional tucker with a modern twist (think kangaroo sliders with bush tomato chutney).

Learn how to surf with a pro

Most Aussies who grew up in the Eighties know the name Pam Burridge. She was Australia’s first professional female surfer and toured the globe for 20 years before winning her first World Title in 1990. These days she runs the Pam Burridge Surf School. “I love it here,” she told me as we waited for our next wave on North Mollymook beach. “It’s just so beautiful, and there are still uncrowded and unspoilt beaches if you’re able to put in the time and explore.”

Bangalay Dining is run by a husband and wife team who make good use of the region’s exceptional produce, and the high-end atmosphere is warmed by relaxed staff whose lives are inextricably linked to the local area. Our waitress just happens to be a third generation oyster farmer.

Coolangatta Estate is known for producing an outstanding Semillon but it’s also the site of first European settlement on the south coast. The cellar door is an excellent pitstop to learn about the history and taste a wine or six.

Cupitt’s, behind the picture-perfect town of Milton, is not only a winery, but also a fromagerie, brewerie and restaurant with views that stretch across the vineyard to Burrill Lake and the Budawang Ranges. It has ‘long lunch’ written all over it.

The Cove has both glamping and cottage accommodation, and is located on the beachfront offering free kayaking and paddleboarding. Kangaroos will vie for your parking spot and distract you from your book as you relax on the beach.

The best way to see the region is to take a self-drive route. Let’s Go Motorhomes has a range of motorhomes and campervans. Campsites such as Seven Mile Beach (look out for Bert and Ernie, the resident goats) and Merry Beach Caravan Park, located on the waterfront and teeming with wild kangaroos, make for excellent bases.

Delta pilots would get more than 30% in pay raises under new contract deal
The best accommodation in Jasná
13 top free things to do in Hawaii: how to see the islands for less
7 of the best beaches in Belize
Paris Train Stations Explained: Which One Is For You?