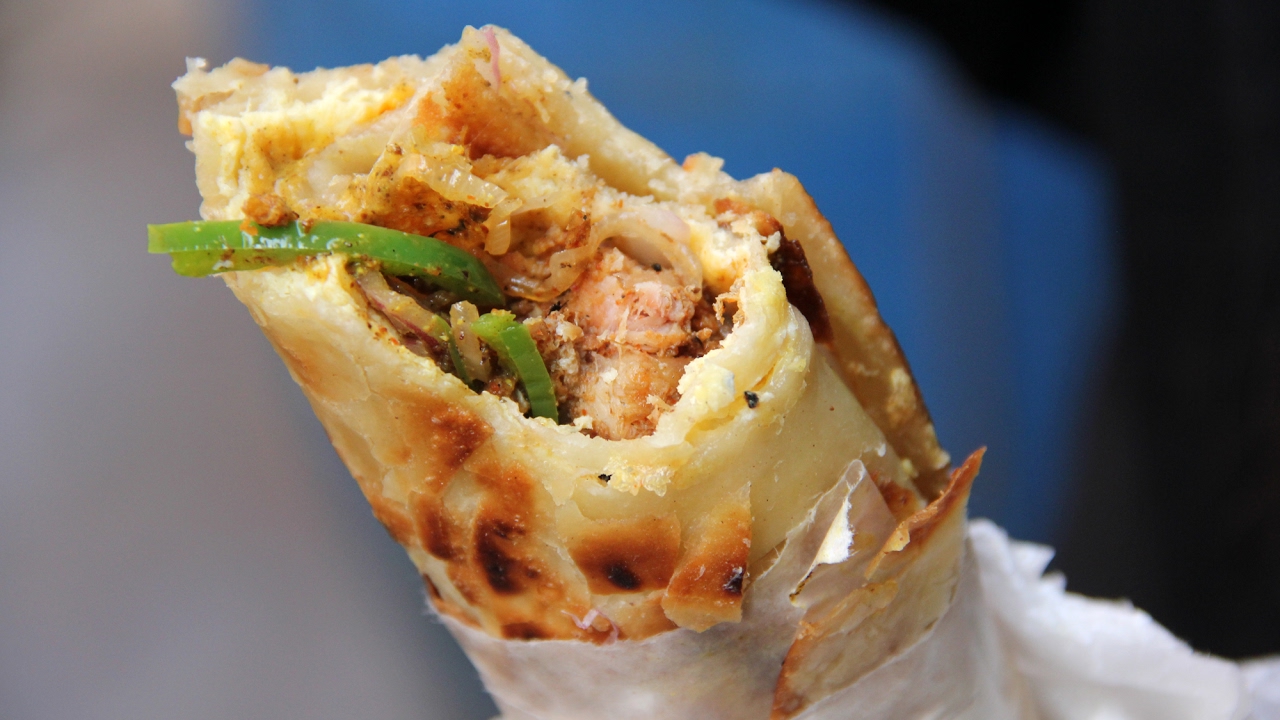 The kati roll is one of the most incredibly tasting fast food snacks in all of India. It all begins with a paratha flatbread that’s cooked in a pool of grease so it become crunchy are oily. After the paratha is done cooking, it’s filled with a choice of ingredients, which normally means spicy chicken, mutton, or egg, condimented with onions and chillies and wrapped up into an Indian kati roll.

Now though kati rolls are served all over India, they were originally invented in Kolkata. Nizam’s a famous restaurants in the heart of Kolkata’s new market, claims to be the first restaurant to create and serve the fast food delight, but now there are numerous favorite local place to get rolls.

In this video, I head to Kusum Rolls and Kebabs, a street side stall that’s located just off Park Street. From a local fried, I had heard that they served the city’s best kati roll and I was desperate to see for myself. With no seating, you just order your food at Kusum and stand either in the parking lot or along the side of the road. The menu, though appearing to be extensive, is really just the same combination of 3 – 4 ingredients in many different wants. For instance you can order just a single egg kati roll, or you can order an egg chicken roll, or a double egg chicken roll, or even a double egg double chicken roll. Not wanting to go too crazy initially, I settled for the chicken egg roll. My paratha was cooked in oil before an egg was fried on top of it in an artful creation. It was then placed on the chopping board where a man piled in greasy pieces of insanely flavorful chicken mixed with onions and peppers. Under my request they then squeezed on a generous amount of mustard sauce – a sauce Kusum rolls is famous for!

Wrapped in a paper that turns transparent from the grease, I was ready to have my first bite of a kati roll. It was even better than I had expected, a Mexican burrito like device that boasted incredible Indian spices. A kati roll is indeed not the healthiest thing to eat in the world, but every now and then it’s well worth the calories and damage to the body. When you’re in Kolkata, India, don’t miss the kati rolls for Kusum Rolls!

9 Hot Toddy Recipes For Winter
Get into: second lines in New Orleans
Enjoy a cozy, romantic vacation at these 5 towns in the Midwest
Simone Ashley And Diet Paratha Are Partnering With Johnnie Walker
Best Things To Do for an Unforgettable Valentine’s Day