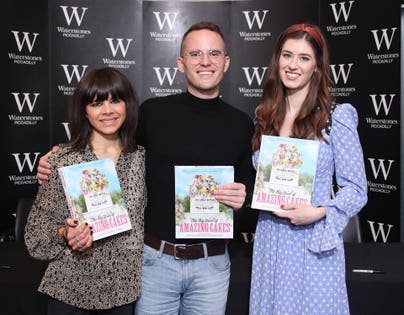 Spoiler advisory: this post includes the results of the Great British Bake Off final. Read no further if you’d rather be surprised.

On Tuesday night, viewers across the United Kingdom tuned in to watch the final of the Great British Bake Off.

By evening, they knew who’d won. So did Netflix viewers who followed Bake Off’s social media, even though they wouldn’t get to see the episode until Friday.

There in my news feed, smiling out from the Great British Bake Off account, was David Atherton, holding the winner’s bouquet and the coveted glass cake plate.

Within hours, Atherton was all over social media, as well as the British media, where a battle broke out over whether he was the worthiest winner.

After all, he never was named star baker, which co-finalist Stephanie Blackwell won four times, and the other co-finalist, Alice Fevronia, won twice.

Now, you can argue that since it has British in its title, of course the Bake Off social media accounts are going to post the image of the winner. It’s a British show, after all, and the audience that built it is British.

But Bake Off, like other British television programs, now has a global audience, which doesn’t get the opportunity to view it in real time. The contrast was never more clear than this year.

This season, Netflix began airing fresh British Bake Off episodes on Fridays, three days after they air in Britain.

That one episode per week strategy was faster than past seasons, and prevented binge watching. At first, it seemed like an improvement, especially since Bake Off seasons never posted so quickly to Netflix in the past.

The only way for Americans to view them in the same week as British viewers was to gain access to one of the British networks’ online players, or find them somehow on YouTube.

Even a three-day lag, however, is enough to spoil the results, and spoil the fun.

It’s like anything else in entertainment: fanatics want to be there when the doors open, like the line at Wegmans in Brooklyn at 7 am this past Sunday, or the lines that are expected to form at Popeyes on Sunday when the fried chicken sandwich returns.

There is a way Netflix can fix this, and it’s a pretty easy fix.

British Bake Off is filmed and edited weeks ahead of its airing on Britain’s Channel 4, which lured the show’s owner, Love Productions, away from the BBC a few years ago.

If you’ve ever watched it on Channel 4, you’ll know there are massive commercial breaks. The Netflix version stitches that time together, so you get a seamless episode.

Since the show is already pre-taped, why not produce one version for Channel 4, and load it onto Netflix that same night, or a day later?

Understandably, Channel 4 may well want an exclusive right to the episode for a period of time, and Americans and others can just sit and wait.

But, Love Productions needs to keep something in mind. British viewers have been watching Bake Off for 10 years now, and there are complaints it is losing its oomph.

Conversely, there is a big group of viewers in the U.S. who have just discovered Bake Off via Netflix.

I know that’s hard for devotees to believe, but to some people, PBS is far less cool than streaming. It’s also possible these viewers no longer have cable TV, and watch everything on streaming.

Additionally, there’s a better chance of social media buzz and engagement if Netflix viewers are watching it in something like real time.

After all, Netflix has 60.6 million U.S. subscribers and 97.9 million internationally, according to the Wall Street Journal.

In Britain, about 9 million people tuned in for the first episode of this season.

Quicker episode posting means the the bakers conceivably can break into the social conversation beyond Britain faster than if people overseas have to wait to discover them.

This will translate to book sales and sales of TV series and visits to their businesses and bookings on television programs in America and elsewhere.

And, presumably, even more money for Love Productions, which got a big paycheck when it changed networks. (Although we all still miss Mary Berry.)

American listeners certainly have boosted The Bake Down, a weekly podcast that features past bakers Jane Beedle and Howard Middleton.

Without that real time advantage, Bake Off on Netflix could remain something of a frustration, rather than a must see.

Netflix has plenty of Bake Off programming to satisfy fans once the current season ends, but why not generate even more excitement and discussion?

Remember the rule about left overs: you’re supposed to throw them out after three days. Wouldn’t a fresher show on Netflix be better than one that’s already socially stale?