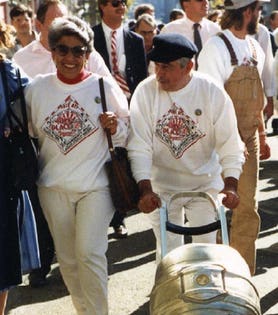 At the age of 76, most people are at least starting to slow down. Not Charles Finkel, who laughs when asked whether he intends to take it easy any time soon. Celebrating the 30th anniversary of their foundational Pike Brewing this month, Finkel and his 73-year-old wife, Rose Ann, have no plans to stop building onto the multiple Seattle-based businesses they own together. In the past year alone, Pike has switched from bottling to a high-tech canning line, opened the Hawaii market for distribution, established its first international pub (in Japan) and is negotiating the second, in China.

“The Pike Brewing Restaurant and Craft Beer Bar in Goya, Japan, has been a big success; a million and a half people have visited,” Finkel says of the satellite location licensed by his Japanese importer. “We might do same in the Yangtze River Delta in a 600-year-old Chinese village. It looks like it’s out of a movie.”

Other than the brewery, situated in the touristy Pike Place Market and containing thousands of beer-history artifacts, the Finkels run a graphic-design firm with their daughter and a seafood restaurant called Tankard & Tun above the beer manufacturing facility. When they opened the restaurant a few years ago they expanded the brewery by 30% and launched a series of one-time experimental beers called Third Story, created to keep up with today’s rapidly evolving trends.

The early craft brewing holdout refers to this proclivity of modern craft drinkers to chase the latest fad as the “’what’s new this week’ sort of thing.”

“We have that Third Story and seasonal beers as well. At the same time we don’t want to forget about (flagship Scotch ale) Kilt Lifter,” says the serial entrepreneur who believes his Pike IPA to be the oldest that remains on the American craft market.

The Finkels, who married in 1968, have always pioneered developments in small-batch food and drink. While Charles was helping rebrand Washington’s Chateau St. Michelle as one of the nation’s pre-eminent wineries in the 1970s, Rose Ann was operating Truffles, which Time magazine recognized as one of the nation’s top five specialty food stores.

In 1978, the couple turned Charles’ earlier experience as a wine importer and the couple’s shared experience as boutique wine merchants into an opportunity to found Merchant du Vin, the beer importation company that brought iconic family-owned breweries like Samuel Smith to America. Rose Ann wrote the first ‘beer menus’ and ‘drink lists’ in the United States, and as she “sat around one night with (iconic beer critic) Michael Jackson,” as she tells it, she named what might be the world’s most famous German doppelbock. Once the name “Celebrator” brought global attention to the 600-year-old Ayinger Brewery, she licensed its worldwide use to her friend and client, brewery owner Angela Inselkammer. This offered a hint of what the couple would do later in life with their Finkel Design firm, which designs logos and brand identities for breweries and other artisan producers in the culinary space.

“She’s a much better student than I ever was,” Finkel says of his wife. “Normally I do the initial design then she finishes it and presents it.”

They’ve since sold Merchant du Vin but continue to have a major hand in the day-to-day of the brewery.

“For all of our food and beverage endeavors we sit in on discussions on menu, beers, packaging,” he says.

To mark the anniversary, the Finkels brought back famous brewing alumni like Fal Allen of Anderson Valley Brewing and Dick Cantwell, formerly of Elysian Brewing, to make the limited-release Pike Reunion IPA. Alongside of Reunion, on the actual anniversary of October 17, Pike rolled back its original brews to their 1989 price of $2.50 per glass sold on-site.

When he opened Pike in 1989, Charles says it was the 3rd independent brewery in Seattle and lacked the capacity to supply its recipes with enough malts or appropriate hops to use any local ingredients. Now the state’s Yakima Valley grows more of the Finkels’ desired aroma hops than anywhere else in the U.S., and growers in the northern states grow a significant amount of malting barley. Pike brewers have adjusted recipes to reflect the shift.

“With our Pike IPA it’s not the same beer than in 1990. We didn’t have those aromatic hops or malts. We had to rely on Maris Otter malt from England, which defeats the concept of sustainability when you’re sourcing your main raw ingredient across the Atlantic.”

Farm-to-table dining is nothing new to the Finkels. Appreciating the European custom of lingering over a locally sourced meal, they brought the Italy-born slow food movement to the Pacific Northwest back in 1998. Fifty years ago they borrowed the Belgian tradition of pairing beers with elegant meals and started trying to sell fine-dining restaurant owners on the idea. In both cases, they spent decades meeting with a lot of resistance.

Fast forward to 2019, when the locavore movement has permeated fast food marketing, and some of the world’s most highly rated restaurants serve beers brewed exclusively for them. Finkel doesn’t dwell on such ironies, instead choosing to focus on the fact that slow and steady, at least for him and Rose Ann, usually wins the race.

“Our plans are for the future to support the business and continue to have it thrive and be a viable entity to support the livelihood of over 100 people and be relevant in the local community,” he says.

Cyber Monday Wine Deals
Why kids will love New Orleans as much as you do
Do I need a visa to visit Switzerland?
Crab and Dumplings!! 🦀 NATIONAL FOOD in Tobago Island + Breadfruit Roast & Dirt Oven!!
Ilegal Launches A Rare Aged Mezcal