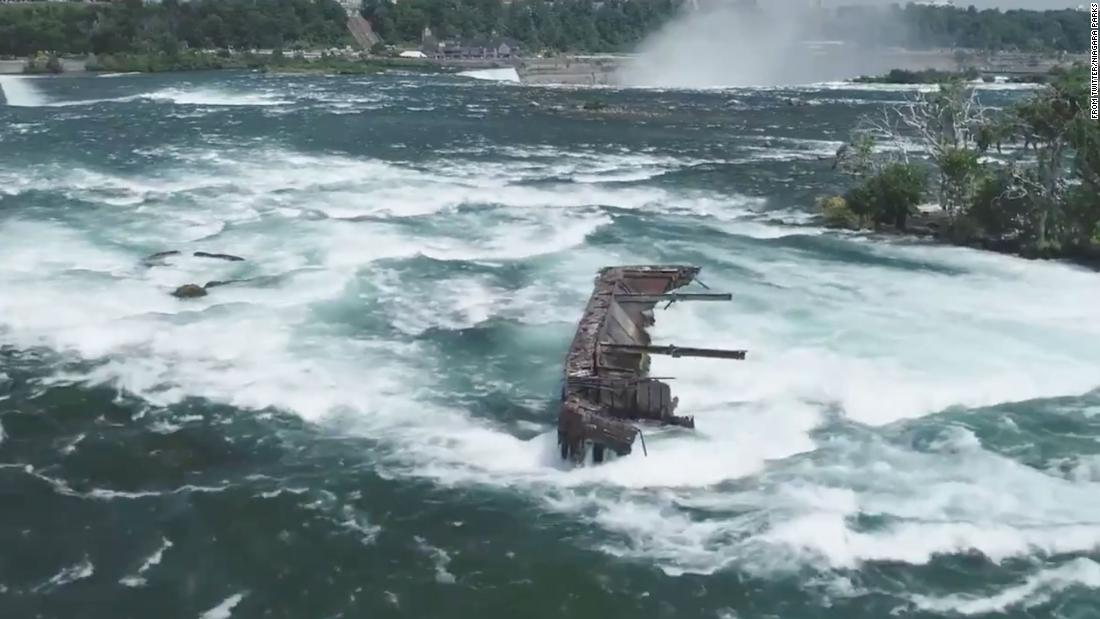 Travel
Share on Facebook
Share on Twitter
Share on Pinterest
Share on LinkedIn
Thursday’s harsh weather pushed the vessel away from its rocky perch and closer to the falls on the Canadian side, according to the Niagara Parks Commission.
It’s the first time it’s moved any appreciable distance for more than a century, according to CNN affiliate CBC.
In a video produced by Niagara Parks Commission on Friday, an official, Jim Hill, said the barge, while not currently moving, appears to have “flipped on its side and spun around.”
The story of how the barge came to rest just above the falls is part of local lore. It involves the rescue of two men from nearby Buffalo, according to Hill, who is the senior manager of heritage with the Parks Commission.
In 1918, a vessel known as a dumping scow became disconnected from its tug boat — with two men aboard — during a dredging operation, according to the Commission, an agency of the Ontario Ministry of Tourism, Culture and Sport. The scow got stranded in the Niagara River, some 650 yards shy of Horseshoe Falls, one of three separate waterfalls that make up Niagara Falls.
Local law enforcement agencies began scrambling to rescue the two men, James Harris and Gustav Lofberg. A boat rescue wasn’t considered safe or even feasible to attempt. Instead, buoys were launched — but the lines became tangled, according to the timeline the Parks Commission published for the 100th anniversary.
With the help of a courageous World War I vet named William “Red” Hill, the lines were sorted out and the men were finally rescued the next day.
While the iron boat deteriorated badly over the century it’s been exposed to the elements, the scow has remained tightly fixed to a rock outcropping since August 1918. That is, until Thursday — Halloween — when gusts of wind and lashings of rain battered the falls, and the remains of the barge.
The Niagara Parks staff is continuing to monitor the activity of the scow, in the event it moves again. Hill says the remains might be stuck in their new perch “for days or for years. It’s anyone’s guess.”
This article was originally published by Cnn.com. Read the original article here.
Share on Facebook
Share on Twitter
Share on Pinterest
Share on LinkedIn

The best things to eat and drink in Egypt
Two companies have luxury trains called the ‘Orient Express.’ Here are the differences
Top Ten Wine Varieties/Styles To Pair With Thanksgiving Turkey
Try this super easy recipe for Italian walnut pasta sauce
How Two Oakland Women Are Rethinking Champagne With A Sparkling Wine Subscription