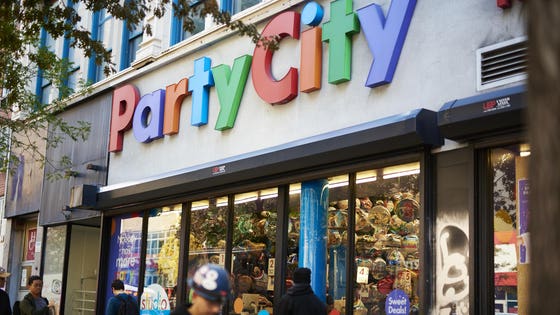 Party City has become its own party pooper: the stock slumped 67% on Thursday to its all-time low of $2 a share after the largest U.S. specialty party-supplies chain posted an unexpected third-quarter loss and cut its annual outlook.

The Elmsford, New York-based company reported a 2.3% drop in sales to $540.2 million, hurt by “headwinds from the helium shortage” that dented its balloons sales. Party City, which in September said it was adding about 25,000 temporary employees for its critical Halloween business, also blamed the costumes business shortfall at its stores.

Party City has about 900 stores in North America under its namesake label and Halloween City. The company has said it plans to shut 45 stores this year, triple its typical annual target.

While it’s easy to blame helium shortage, cost inflation or industrywide slowdown in Halloween sales, Party City’s woes go way beyond those or the U.S.-China tariffs war. At the crux of it, it’s struggling, like many traditional specialty brick-and-mortar retailers, to prove its stores are relevant at a time when consumers have more choices than ever, online and elsewhere.

Against that backdrop, Party City also looks to have big catching up to do when it comes to delivering on that customer experience and service that’s more crucial than ever for it to stand out. Just look at the various Party City social media sites and Yelp reviews, and one can get a sense of the work that’s cut out for the retailer.

“When you go there, expect to spend a good hour,” a customer with username Jacqueline F. said in a May Yelp review of Party City’s 14th Street location in New York. “Not because you’re browsing through the merchandise, more like standing on line waiting to check out. They have 10 cash registers but for the most part there are 2 cashiers. One ringing up the long line of (customers) and the other blowing up balloons.”

Many customer reviews also signal kinks on the company’s service on online order for in store pickup, while its bigger discount rivals like Walmart already have a leg up on those initiatives.

“Worst customer service, worst online ordering system honestly I don’t know why I still shop here!!” a Facebook user named Alecia Brianne Lugo said in an October post on Party City’s page. “Charged twice for a costume that was sold out and wasn’t even available for me to pick up!”

On the company’s call Thursday, Party City’s newly minted president Brad Weston, former Petco CEO who joined Party City in July, said the retailer is working to “make it even easier to pick up and receive orders.”

Three months into his new job, Weston admitted Party City has plenty of work to do. For one, its stores are way too cluttered. For example, they offer 32 solid color tableware assortment while the top 15 colors, about half of the mix, generate 90% of that business, he said.

“We recognize that the product selection in our stores can be overwhelming,” he said on the call. “We see a significant opportunity to further curate and simplify our assortments.”

He also vowed to better display merchandise in ways that will make navigating its stores and locating products “simpler and more convenient.” The company also is testing a loyalty reward program and has named a new merchandising chief at a time when consumers want more goods tailored to them on a personal level and social-media worthy.

Party City will have to act fast. After all, there are plenty of rivals already better at those games. Online, while Party City is also selling on Amazon, over 100,000 options that surface on the ecommerce giant’s site under party supplies is yet another signal of the crowded scene full of eager players ready to chip away at Party City’s share.

Related on Forbes: Fashion’s old guard is racing to figure out how to be cool enough for Gen Z

Related on Forbes: Amazon will make Amazon Fresh, moving to strengthen its lead in the online grocery market