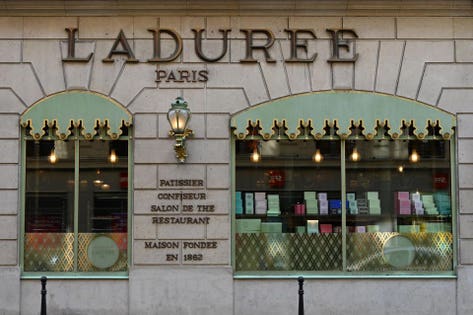 French cuisine is known for its milky cheeses, buttery sauces and rich desserts. Ladurée has been one of the top french establishments to bring those delicacies to life since 1862, but this past fall they did the unthinkable. They went vegan.

The famous tea room’s decision to turn their Beverly Hills flagship into a totally vegan menu came with much research and development as many of their offerings had never been successfully made vegan while still holding to up to traditional taste. Ladurée partnered with Mathew Kenney, CEO of Matthew Kenney Cuisine and a leader in the growing market of high-end plant-based cuisine, to complete the task of making vegan still taste French. Kenney graduated from the French Culinary Institute. He later went on to open 17 plant-based culinary restaurants inover 10 countries and has authored 13 books. He also has developed menu’s through licensing agreements with world-class brands such as the Four Seasons Hotel Group, Saks Fifth Avenue, Neiman Marcus and Ovolo Hotels among others. “As a classically French trained chef who has focused on plant-based dining for the past 17 years, our collaboration with Ladurée is the ideal representation of everything I have been working towards – respect for tradition while simultaneously embracing the future of food. I am deeply respectful of the Ladurée brand and simultaneously honored to be part of their next chapter” said Kenney

“Matthew and the Ladurée chefs have worked diligently to create 100% vegan dishes both savory and sweet by injecting the plant-based California approach. The Beverly Hills Ladurée Tea Salon has been fully taken over by Matthew and the menu will be dedicated to 100% vegan dishes. A first for the brand. As for the other Ladurée locations throughout the world, select vegan dishes will be offered in addition to the regular menu,” explained Elisabeth Holder, US President of Ladurée.

The inspiration to go vegan came from the lifestyle Holder already embraced, “It is part of our lives and a natural evolution. I grew up with my parents and grandparents who were bakers and hearing the old adage “You Are What You Eat.” But nowadays it takes a much deeper meaning, ingredient sourcing and tastes are equally important.”

The Ladurée team feels that this was a natural progression for the brand to embrace this new way of cooking and living. They are aware that Ladurée’s future needs to prepare and evolve for the next 150 years. Although it is an exciting new approach for Ladurée, they will continue to stay close to its core brand values about taste, well-being, conviviality and art de vivre.

The Beverly Hills location is officially named Ladurée by Matthew Kenney while the other global tea rooms will still remain the same with a traditional menu offering a select vegan options.