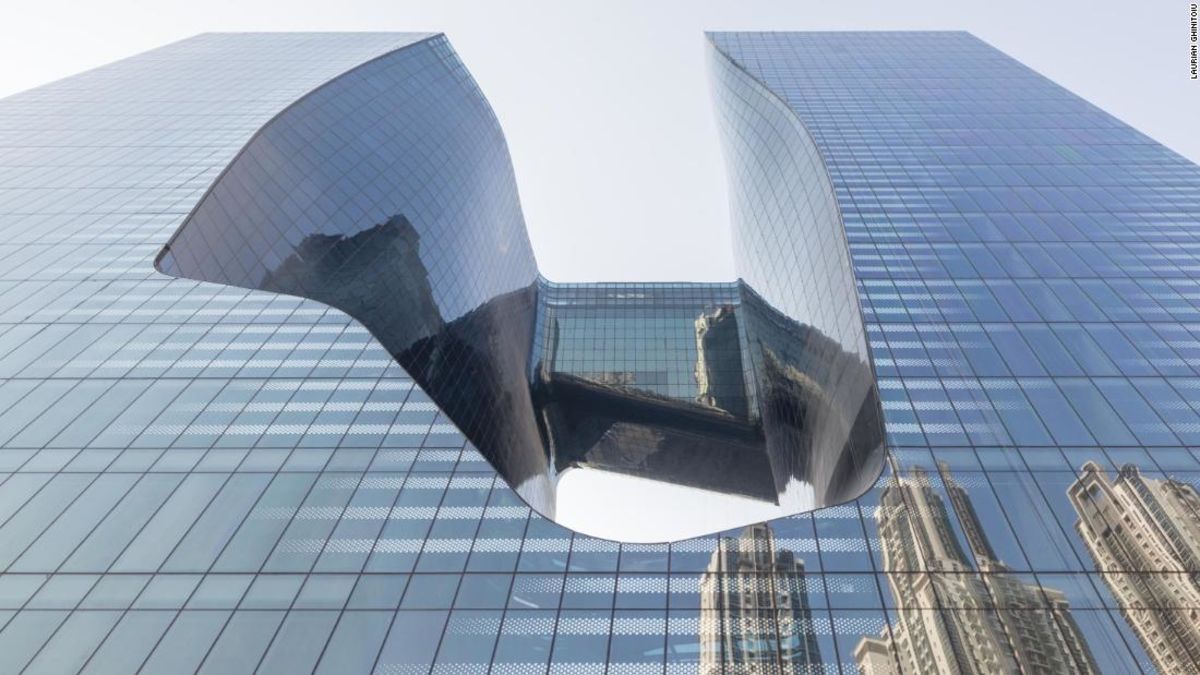 (CNN) — Dubai’s hotels are among the most luxurious and extravagant in the world. But there’s one that’s about to set itself apart from all others in the Emirate.

The soon-to-be-opened ME by Melia, will be the first and only in the global city to be designed by the late, world-famous architect, Zaha Hadid.

Designed by Zaha Hadid, The Opus, will house the first “ME by Melia” hotel in Dubai

The Opus was first proposed back in 2007 as a commercial and retail development. Zaha Hadid Architects (ZHA) say the building is designed as two separate towers that merge into a singular whole taking the form of a cube. The two towers are linked by a four-storey atrium at ground level and by an asymmetric three-storey bridge that is 71 meters above the ground. The hollowed-out core allows those in the center of the building to have views of the outside world.

The cube’s interior is “carved” out to create a central void, in a similar way that won acclaim for her firm for the Morpheaus Hotel in Macau.

Nicknamed the “Queen of the Curve,” Zaha Hadid transformed skylines around the world with her bold, fluid designs, including London’s Olympic aquatics center and the Heydar Aliyev Center in Azerbaijan.

The developer, Omniyat, is forging ahead towards the opening of the The Opus.

“The design conveys the remarkably inventive quality of ZHA’s work; expressing a sculptural sensibility that reinvents the balance between solid and void, opaque and transparent, interior and exterior,” says Mahdi Amjad, Omniyat executive chairman and CEO.

The interior designs for the hotel were also personally overseen by Hadid. “You always expect to be surprised by ZHA’s designs, but the Opus for ‘ME by Melia’ Dubai goes beyond what we could ever have anticipated,” said Gabriel Escarrer, Vice Chairman and CEO, Melia Hotels International.

There is no word yet on exactly when it will welcome its first guests.

The ME Dubai enters a crowded and competitive market. Dubai is known for its iconic Burj al Arab, the world’s tallest hotel and spectacular developments on its Palm Jumeriah islands. Situated in Downtown Dubai, The Opus sits near to the Burj Khalifa, the tallest building in the world, the Dubai Mall and close to the city’s Jumeirah beach.

The Burj Al-Arab turns 20 this year. Here is a look back at some of the most head-turning stunts performed on its famous helipad

The Opus is one of four projects by Zaha Hadid Architects that has been shortlisted for the 2019 World Architecture Festival Awards. It is the only project directly touched by Zaha Hadid to be fully realized in Dubai. The iconic architect developed designs for the interlocking Signature Towers as well as the Dubai Opera House, however these projects were never realized.
This article was originally published by Cnn.com. Read the original article here.
Share on Facebook
Share on Twitter
Share on Pinterest
Share on LinkedIn

Do I need a visa to visit Switzerland?
How to make German currywurst
2022 gift guide: 10 best gifts for families who love to travel
Hoping to beat the tourist crowd on your trip to Japan? That ship has sailed
U.S. World Cup team pelted with political questions in tense news conference ahead of crucial Iran game