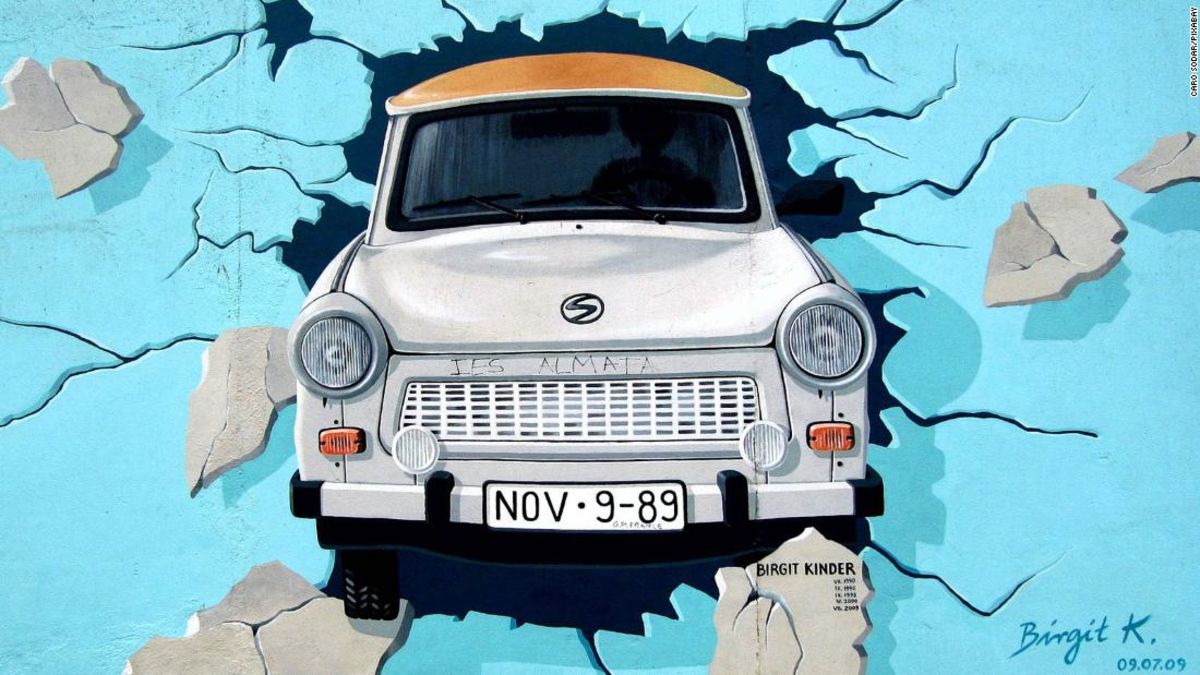 On one side, the Soviet-backed East functioned under a socialist state while the West was controlled by Allied forces, a little urban island of democracy inside East Germany.

Eventually, soldiers replaced the barbed wire with a hulking concrete barrier that became the Berlin Wall. For 28 years, the wall stood as a heavy and imposing reminder of the physical and ideological Cold War divisions of a city and a nation.

The wall finally was demolished in 1989 as Cold War tensions improved across the globe. The most effusive celebration of the city’s reunification took place on November 9, 1989, shortly after the East German government announced that all citizens in its capital would be able to move freely across the city.

Euphoric Berliners rushed to the wall and tore it apart with shovels, hammers and picks, eager to end an era of restriction and suppression.

This year, Germany commemorates the 30th anniversary of the fall of the wall. Anyone who travels to Berlin can visit the remains of the 155-kilometer structure at the following locations, which are all free.

These places are home to specific histories and offer their own perspectives on what is still one of the most chilling symbols of the Iron Curtain:

The East Side Gallery is an open-air memorial that features 100 vibrant murals covering the longest continuous stretch of the wall.

The project began after the wall came down, with 118 artists from 21 countries offering to paint the remaining structure with their visual interpretations of the events both leading up to and following reunification.

The most popular images remain a bright yellow Trabant car, created by Birgit Kinder, and Dmitri Vrubel’s Fraternal Kiss. The best way to see the colorful work is to start at Ostbahnhof railway station and follow the route of 1.3 kilometers (.8 mile) to take it all in.

The Topography of Terror

While this museum focuses on the terror and persecution inflicted by the Third Reich, an outdoor section contains a 200-meter section of the wall.

Formerly a barrier between the districts of Mitte and Kreuzberg, the sizable wall remnant has been preserved and designated a national monument. Visitors can tour the Topography of Terror and see the piece, which forms part of the museum’s Documentation Center, for free.

Bornholmer Straße was one of seven border crossing points between East and West Berlin. However, on November 9, 1989, thousands of people heard news that a change in travel had come and that people would be able to cross the border freely.

East Berliners rushed to a bridge located at the Bornholmer Straße border crossing and demanded that guards let them pass. Even without official orders, the guards relented.

They let more than 20,000 people into the West, making Bornholmer Straße the first border crossing to open in the city. Today, the “Platz des 9. November 1989” outdoor exhibition chronicles these events and also details how the border crossing was built.

When the city was divided, the Berlin border ran directly across a row of apartments on Mitte’s Bernauer Straße. While one side of the building was situated in the East, another side faced the West — and the windows and doors there provided ways for residents to flee.

They slid down ropes and jumped from balconies into rescue nets set up by fire departments in the West, risking serious injuries. Eventually, all of the building’s windows and doors leading to the West were blocked and boarded up and the remaining tenants had to move.

Today, a small, interactive exhibition located where the foundation of the building remains gives visitors a chance to watch video and listen to audio that describes how people made their escape.

This short, squat watchtower doesn’t look like much sitting in a quiet section of Schlesischer Park, covered in curls of graffiti. But years ago, it was the centerpiece of Berlin’s border regime. Inside the structure, guards oversaw 18 watchtowers and a network of electronic security devices pertaining to nearby sections of the wall.

The ground floor contained a bathroom and a holding cell, while an observation post at the top provided a view of the surrounding area. A searchlight is still visible at the roof of the tower, but travelers who want to go inside can only visit by appointment from May to October.

Checkpoint Charlie became one of the most important border crossing sites during the Cold War, particularly because it was the main way for non-German visitors to enter East Berlin.

A massive sign read “YOU ARE LEAVING THE AMERICAN SECTOR” in multiple languages, becoming a blunt physical representation of the division in the city.

These days, Checkpoint Charlie has transformed into a popular tourist destination. If the area’s costumed guards asking for photos seem too kitschy, an open-air exhibition at the intersection of Schützenstraße and Zimmerstraße tells the much more compelling stories of Berliners who tried to cross the border.

In recent years, Potsdamer Platz has flourished into a busy, commercial shopping center in Berlin. But amid the glossy store windows and restaurants packed with people, six sections of the wall have been erected near the entrance of the Potsdamer Platz U-bahn station.

The city installed these original slabs of concrete, which are completely covered in graffiti, after segments of the wall that stood at Potsdamer Platz and Stresemannstraße were taken down in 2008. A haunting metal strip that still runs through the area serves as another marker of where the wall once stood.

Don’t Let Lost Luggage Ruin Your Trip!
These are the best times to visit Yosemite National Park
New York’s Via Carota Restaurant Launches A Craft Cocktail Brand
What are the best beaches, restaurants and attractions in Hawaii? Vote now
Watch how these showstopping #cookies are made. #satisfying