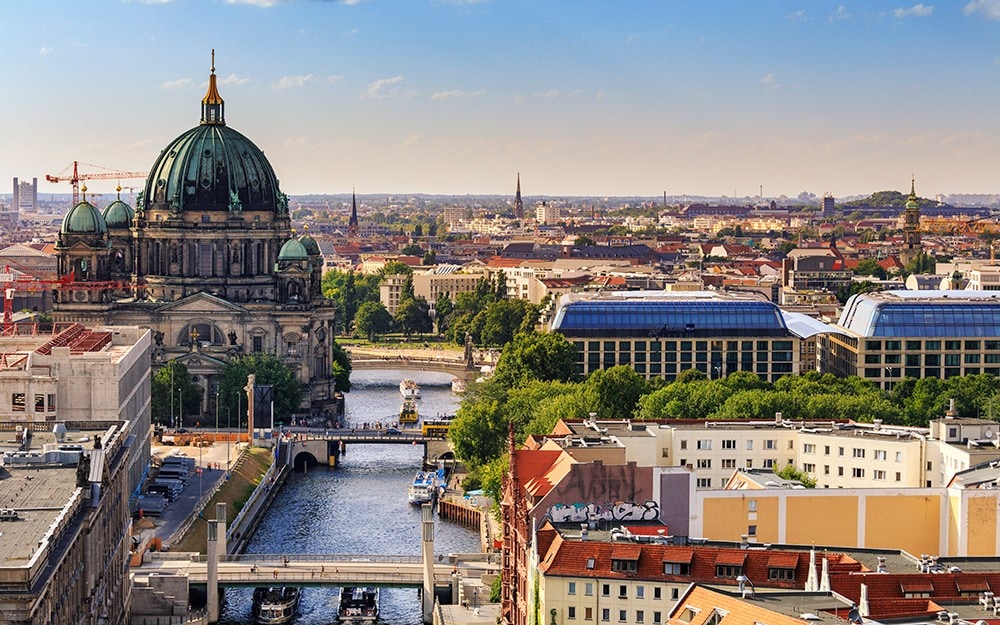 City of culture, clubbing and… currywurst

Berlin has busied itself since the fall of its infamous Wall with becoming one of the most stimulating creative and cultural centres in Europe. It is a hub for hedonists, hipsters and history buffs alike – one that truly offers something for everyone. Its slew of art spaces, notoriously tolerant nightlife and burgeoning start-up scene grab the headlines most regularly, but the city is also a welcoming destination for families thanks to a wealth of green spaces, sparkling lakes and a generally child-friendly infrastructure. Luxury travellers are catered for with a slew of five-star hotels, Michelin-starred dining spots and indulgent spas; and for history fans, there’s plenty – after all, the city was at the heart of much of the turbulent 20th century.

Alongside world-famous cultural and historical sights – such as the Unesco-protected Museum Island and the domed Reichstag, Alexanderplatz and Checkpoint Charlie – the inner-city neighbourhoods (Prenzlauer Berg, Friedrichshain, Kreuzberg, Neukölln and Schöneberg) are huge on local atmosphere and peppered with hip bars and restaurants, as well as independent boutiques and quirky museums.

Discover the best of Berlin

Paul Sullivan, our resident expert, offers his top tips on the best things to do and the hottest places to eat and drink this season.

Although Kin Dee (Lützowstr 81; 00 49 30 2155 294) opened a couple of years ago, this unassuming but excellent Thai restaurant has been placed firmly on Berlin’s culinary map with a 2019 Michelin star. The cuisine is certainly worth the trip to Schöneberg. In contrast to the simple and sparsely decorated interior, the authentic Thai dishes are spectacular, presented with contemporary twists and made with a commitment to regional ingredients. Try the tasting menu for the full experience. Open Tues-Sat from 6pm.

• The best restaurants in Berlin

As many of Mitte’s bars disappear via gentrification, the trendy and colourful cocktail bar Mr Susan (Krausnickstraße 1; 00 49 160 536 7463) fills a beautiful niche between the hyper-commercial districts of Hackescher Markt and Friedrichstraße. Pull up a blue-seated bar stool at the pink terrazzo bar and choose from the list of classics or try creative concoctions such as the kimchi popsicle Micheladas, or drinks made with fir, sesame and even mushroom reductions.

• The best bars in Berlin

An exhibition focusing on German Expressionist Emil Nolde has been a long time coming. This one at the Hamburger Bahnhof (Invalidenstraße 50-51) exhibits more than 100 original works, some of which have never been shown before, and many of which were smeared as ‘Degenerate Art’ by the Nazis – even though he was a member of the party himself, a controversial aspect of his character and art that the exhibition also explores. Until September 15, 2019.

This year is the 30th anniversary of the fall of the Berlin Wall, and Berlin inevitably has celebrations lined up. More than 100 events – large-scale 3D video projections, concerts, theatrical performances, readings, film screenings, exhibitions and more – are taking place every night for a week at seven relevant “Peaceful Revolution” sites such as Alexanderplatz, the East Side Gallery and the newly opened Humboldt Forum. Nov 4-9.

• The best things to do in Berlin

Take a light lunch or coffee break at the Deutsches Historisches Museum‘s (Unter den Linden 2; 00 49 30 203040) pleasant Café im Zeughaus, whose pavement terrace looks out over the Lustgarten and Berlin Cathedral (Am Lustgarten; 00 49 30 2026 9152). The dome of the latter is well worth ascending on a clear day, but first explore 2,000 years of German history in the adjacent museum.

Cross the road for a look inside the distinctively shaped Humboldt Box, the temporary information gallery for the rebuilding of the city’s Prussian Palace (due to reopen at the end of 2019). As well as a history of the palace and the Hohenzollern family, you can see a scale map of its former glory (and how it fit neatly with the broader Museum Island ensemble). Plus, the top-floor has a café with views over the construction site.

At the western end of Unter den Linden you’ll find the Brandenburger Tor (Pariser Platz), which has an interesting museum. Around the corner is the historic Reichstag (Platz der Republik 1; 00 49 30 2273 2152), whose dome can be climbed for memorable sunset vistas. Pre-book a table at the Reichstag’s rooftop Käfer Dachgarten restaurant (Käfer Dachgarten; 00 49 30 226 2990), which offers decent German cuisine and the chance to jump the queues, or head to Cookies Cream (Behrenstraße 55; 00 49 30 2749 2940) for inventive, Michelin-star quality vegetarian cuisine.

Round the night off with some classy cocktails at the Crackers bar below (Friedrichstraße 158; 00 49 30 6807 30488), or take a taxi to the more intimate Buck & Breck (Brunnenstraße 177). If you’re in the mood for a classic Berlin techno party but don’t want the trauma of long lines and almost-certain door rejection, try Watergate or Tresor.

Begin at Potsdamer Platz. One of Europe’s busiest squares in the Weimar era, and a derelict wasteland during the Berlin Wall years, today it’s the boldest symbol of contemporary – or at least commercial – Berlin, complete with looming skyscrapers and swish shopping malls. The distinctive, peat-fired brick Kollhoff Tower (Potsdamer Platz 1; 00 49 30 25 29 43 72) offers a viewing platform (and a café) at the top, while the Deutsche Kinemathek museum (Potsdamer Str. 2; 00 49 30 300 90 30) gives an impressively modern and thorough overview of German television and cinema.

Though well-known for its sights and shopping, decent restaurants are thin on the ground; best to grab a quick and healthy lunch at Weilands Wellfood, (Atrium Tower, Eichhornstraße 3), which has poké bowls, salads and tasty vegan, vegetarian and meat dishes, and overlooks a pleasant pond with a sculpture by Mark di Suvero (lunch from €8/£7).

The LP12 Mall of Berlin (00 49 30 2062 1770) at nearby Leipziger Platz has a wealth of mid-range and high-end stores, but hipper is the the Bikini Mall (Budapester Str; 00 49 30 5549 6455), a 15-minute S Bahn ride from Potsdamer Platz to Zoologischer Garten, which offers Berlin/German brands such as Blutsgeschwister, Closed and Mykita. Nearby sights to explore when you’re done browsing are the Kaiser Wilhelm Memorial Church (Breitscheidplatz) and Berlin’s Zoo and Aquarium (Hardenbergplatz 8; 00 49 30 254 010), Germany’s largest and oldest.

The nearby 25 Hours Bikini hotel’s Monkey Bar (Budapester Str; 00 49 30 120 2210) has great aperitif options and a pleasant wrap-around terrace that overlooks the zoo and the church. Its classy in-house restaurant NENI also has very good Middle-Eastern and Mediterranean cuisine – and great views. Afterwards, catch a cabaret show, comedy or drama at the legendary Theater und Komödie am Kurfürstendamm (B2 14; 00 49 30 8859 1188).

Afterwards, walk to the small but convivial Rum Trader (Fasanenstraße 40; 00 49 30 8811428) for some of the most sophisticated drinks in town – don’t try and order a Moscow Mule or a Basil Smash or you’ll be met with righteous indignation.

• The best nightlife in Berlin

The Waldorf Astoria is a classic Berlin hotel in the upmarket City West district. It more than earns each of its five stars for its convenient location and excellent service. Elegant and sophisticated, the interiors seamlessly blend Art Deco and contemporary touches, while the staff are eager and obliging. The first – and only – Guerlain Spa in Germany is located on the fifth floor of the hotel, and is one of the best in town.

If you’re looking for a hotel that seduces from the off, pick Monbijou. This intimate boutique hotel enjoys a wonderfully central location, a welcoming (even romantic) aesthetic, friendly service and an impressive array of on-site amenities that span a bar, lounge, roof terrace and small fitness area.

The Michelberger hotel yells youthful creativity. It has a buzzy bar and a courtyard for concerts, both popular in their own right, one of the best restaurants in the neighbourhood, plus a range of funky, idiosyncratic rooms to choose from. It’s also close to Friedrichshain’s nightlife scene. Dorm-style rooms are also available.

• A complete guide to the best hotels in Berlin

The 15 best experiences in Toronto
Do I need a visa to travel to Ireland?
6 great US winter resorts you can enjoy even if you hate skiing
Greatest Ever Afro-Caribbean Food!! BACKYARD CREOLE COOKOUT in Paradise Island Tobago!!
An expert guide to ski holidays in Madonna di Campiglio