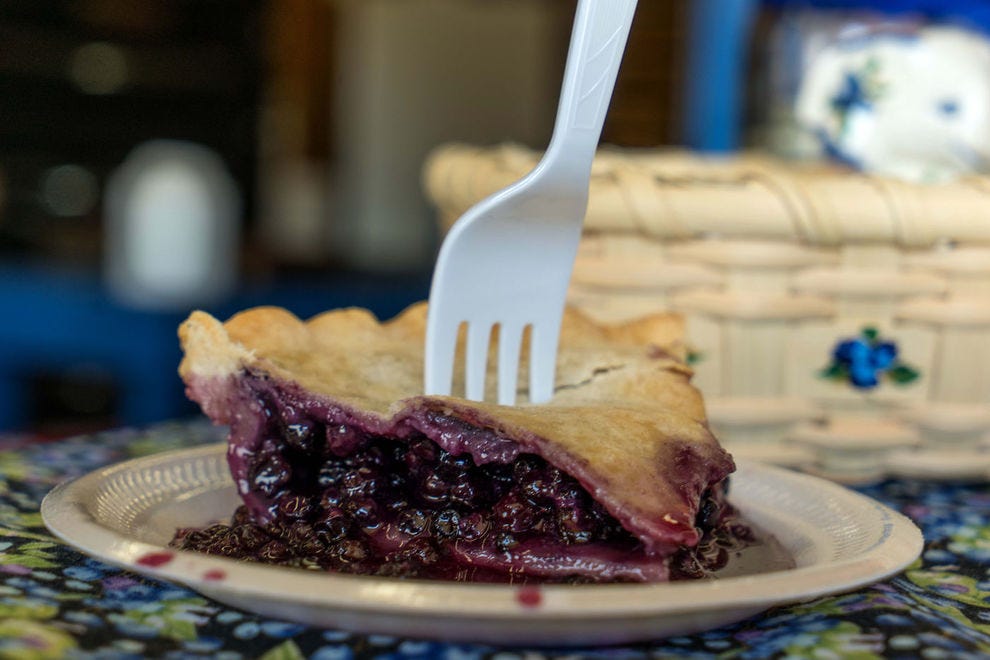 Lobster is a Maine culinary hallmark, but there’s a windfall of flavor to explore when you visit New England’s easternmost state. An abundance of high-integrity ingredients from fertile farms and salty seas emphasize primary materials rather than elaborate technique.

Life in Maine moves at a pace set by wind, weather and tides, just as it has for centuries. This throwback quality is evident on the plate so expect authentic, unfussy foods that recall yesteryear.

Though Portland is the current gastronomic darling, much of the state is an uncharted epicurean’s dream. Look on a map and you’ll see remote wisps of land stretching into the Atlantic. Venture down one and find tastes to satisfy your every craving. 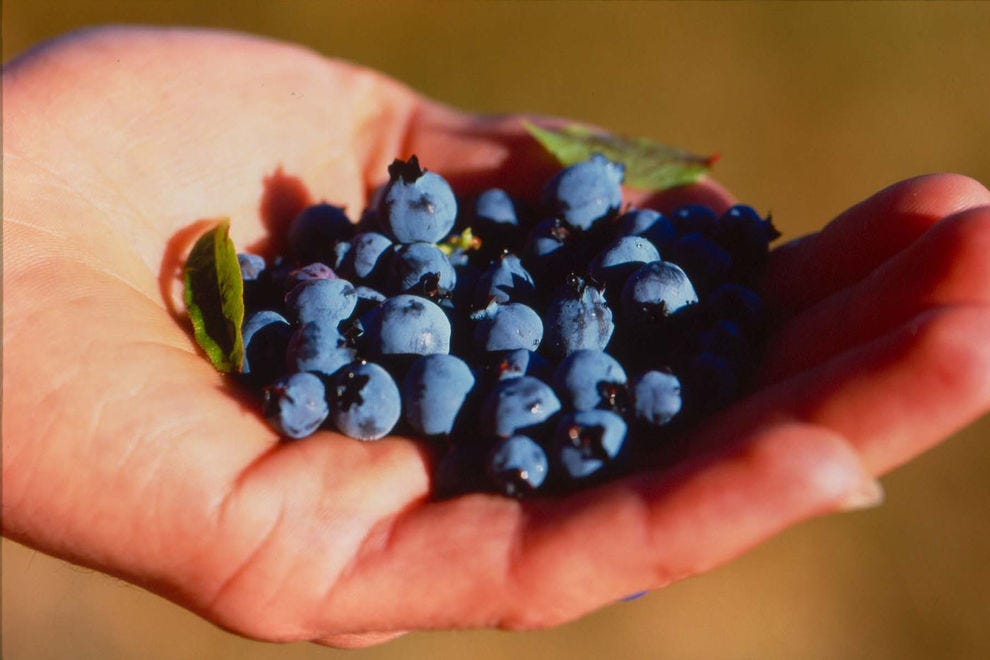 Unlike their cultivated cousins, wild blueberries are not pumped with water, giving them more concentrated flavor. The bountiful summer season usually starts in July and lasts for a few weeks, when dozens of roadside stands pepper the landscape. These luscious lavender-blue beauties are the star of many a cobbler, pie, crumble, buckle and jam jar.

At Nervous Nellie’s Jams and Jellies, jam is made in small batches in a storybook cottage surrounded by a whimsical sculpture garden. Their Wild Maine Blueberry Preserves are loaded with flavor. Spread some on toast on a frosty winter morning and be transported straight back to summer. 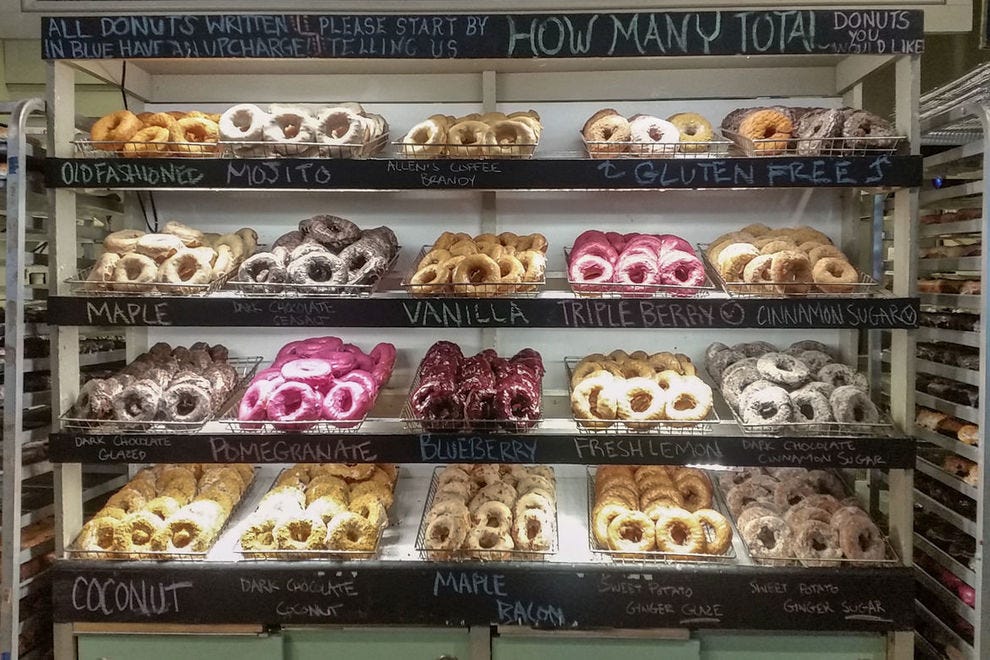 The Holy Donut is the Holy Grail for lovers of deep-fried dough. You can eat delicious donuts in many parts of the country but the locavore twist here is dough that’s enhanced with Maine mashed potatoes straight from Aroostook County.

The potatoes add a burst of moisture and an unexpected texture that melts in your mouth. Flavors rotate but often include dark chocolate sea salt and blueberry. 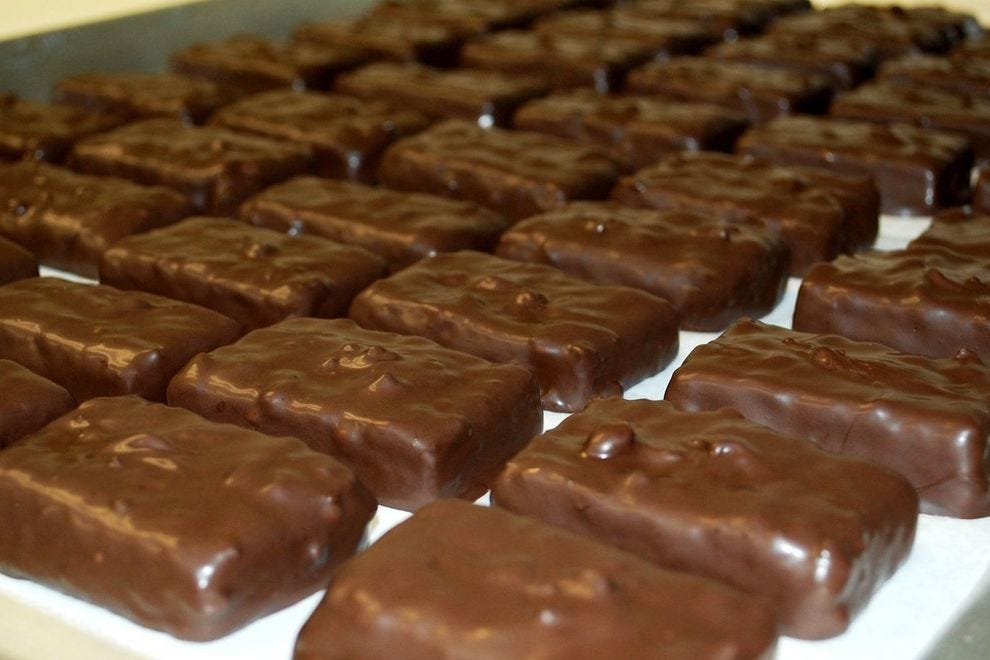 Needhams are a soft, moist blend of mashed potatoes, coconut, sugar and vanilla, coated in shiny chocolate. Created in 1872 as a way to utilize the abundance of local spuds, these compact confections are rarely seen out of state.

Needhams are a signature item at family-owned Robin’s Confections. Come ready to nosh as the assortment of hand-dipped sweets would impress Willy Wonka. 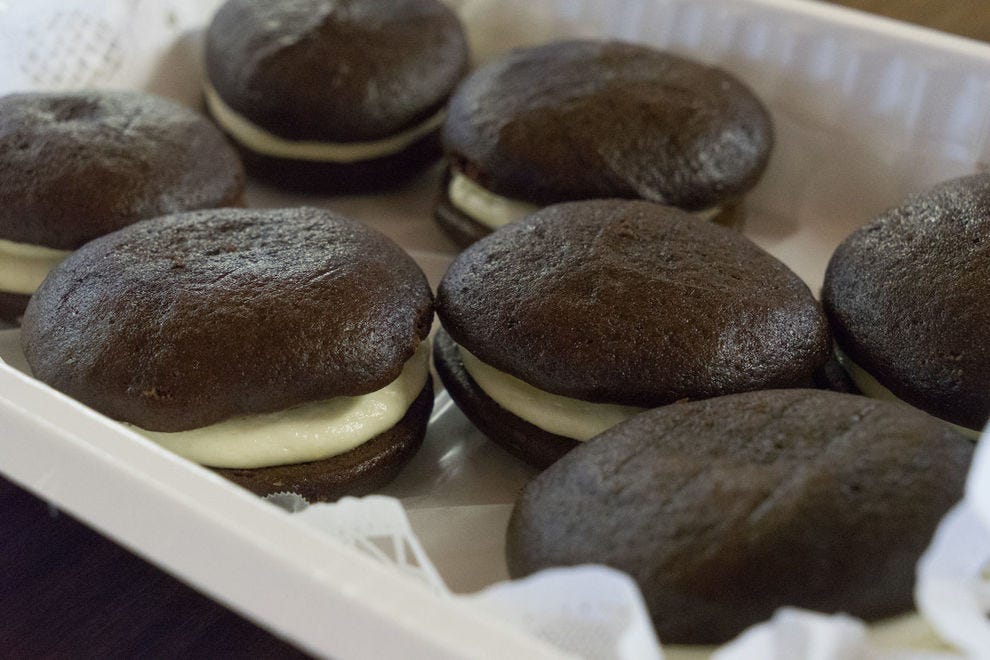 The sugar fairy has blessed Maine, so leave your diet at the state border. Whoopie pies are beloved in several states, but it’s Maine’s official state treat. This snack isn’t really a pie; it consists of two discs of cake-like cookies sandwiched around a fluffy marshmallow filling.

Wicked Whoopies sells a slew of flavors and sizes, including a popular bite-sized version. Order the classic chocolate variety or try the tropical-inspired coconut or citrusy Creamsicle. 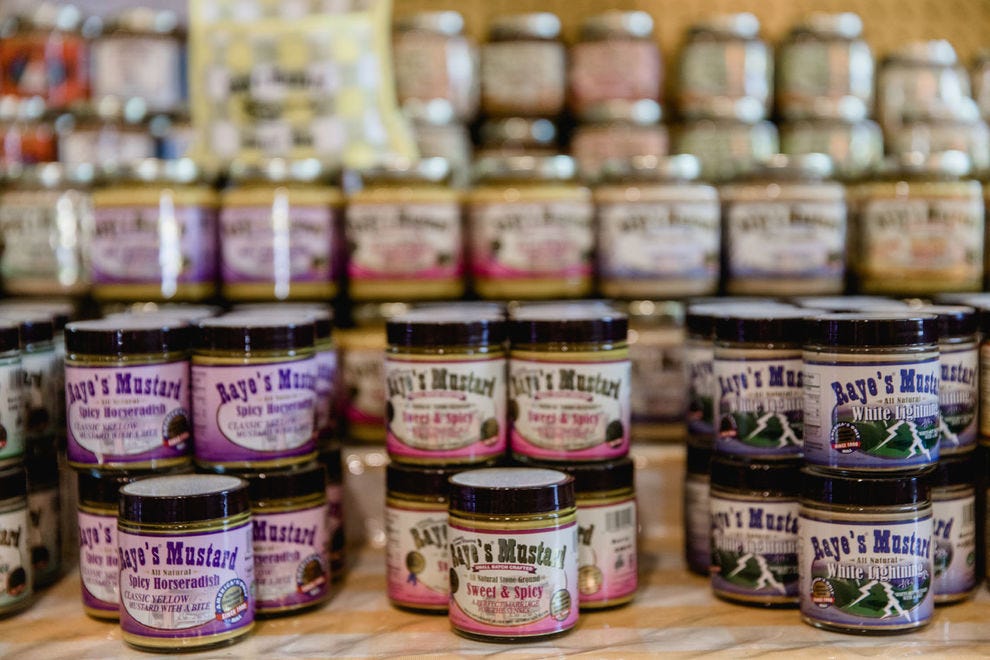 Raye’s Mustard is North America’s last remaining traditional stone-ground mustard mill. The Raye family has been making mustard since 1900 and their commitment to quality has remained constant. The mustard is made in small batches at the Eastport factory using the original mill.

They utilize a cold grind process, which helps to preserve the taste of the whole seed. Try the Down East Schooner, a yellow mustard that’s a hot dog’s best friend or go for the zesty kick of Maple Horseradish made with Maine maple syrup.

There are few foods as all-American as pie. In seaside Rockland, flaky crust is celebrated one weekend each January when Pies on Parade hits town. Local inns, restaurants and businesses each make and serve pie. One ticket allows you to sample them all, so make room for at least two dozen. Proceeds support a local food bank so it’s for a good cause. 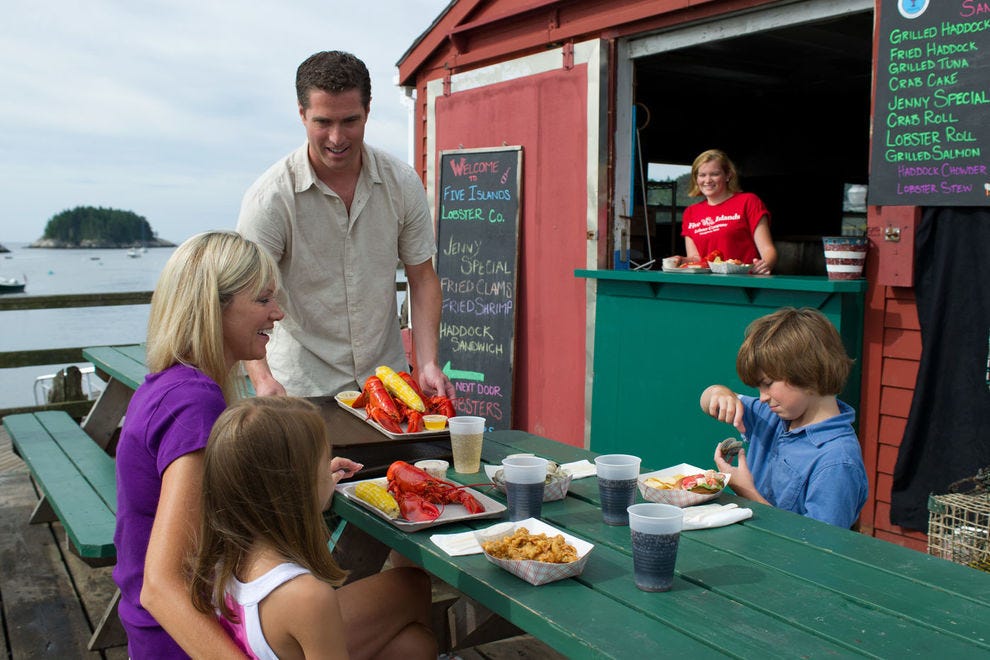 Crustaceans and mollusks are the briny essence of Maine. Seasonal seafood shacks abound and fried clams are a specialty. Soft-shell clams are shucked, dredged in a flour-and-cornmeal combo, deep-fried and served with a squirt of fresh lemon and a side of tartar sauce. Whole clams include the belly while strips don’t. They are served in a paper box or nestled in a top-split bun.

America’s first mass-marketed soft drink, Moxie is a carbonated beverage that was originally sold as a nerve tonic back in 1884. Mainers once consumed it by the spoonful though today it’s guzzled by the can or bottle. It contains gentian root, which is used to make cocktail bitters.

Some find it has a peppy taste while others think it borders on medicinal. You can purchase Moxie at most convenience stores or if you acquire a taste for it, hit the annual Moxie Festival in Lisbon each July. 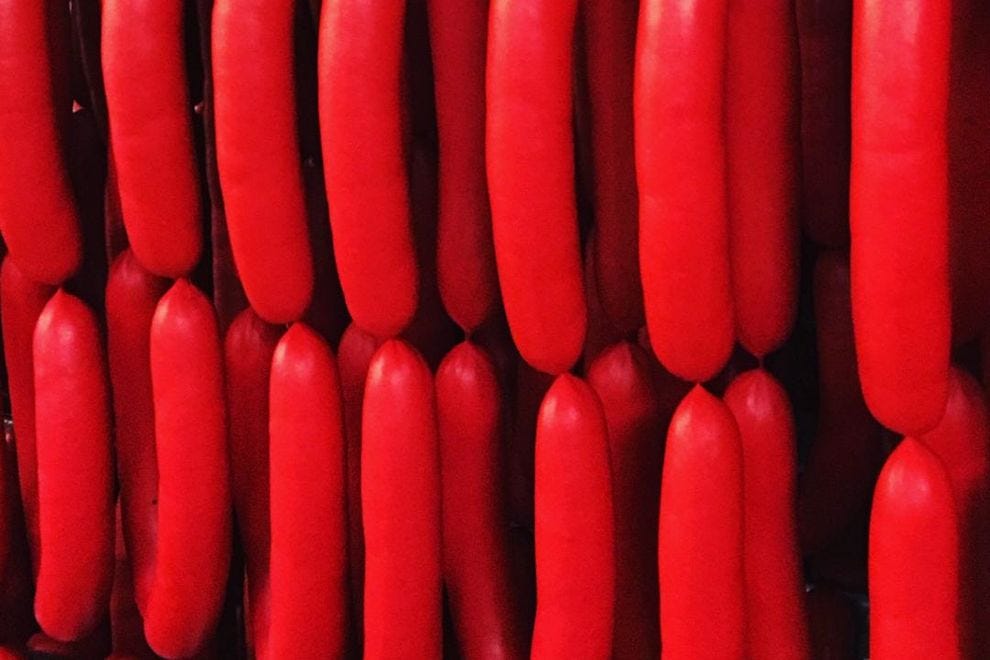 Maine summer is short-lived and residents celebrate the season with as many barbecues as they can squeeze in. Red snapper hot dogs are a mainstay at these outdoor feasts. The frankfurters get their sassy scarlet hue courtesy of dye and their serious snap thanks to natural casing. They’re a combo of beef and pork, usually served on a traditional top-split New England bun.

Bangor-based butchers W.A. Bean & Sons have been making red dogs for over 150 years and continue to do a brisk business throughout the state and around the country, thanks to mail order. 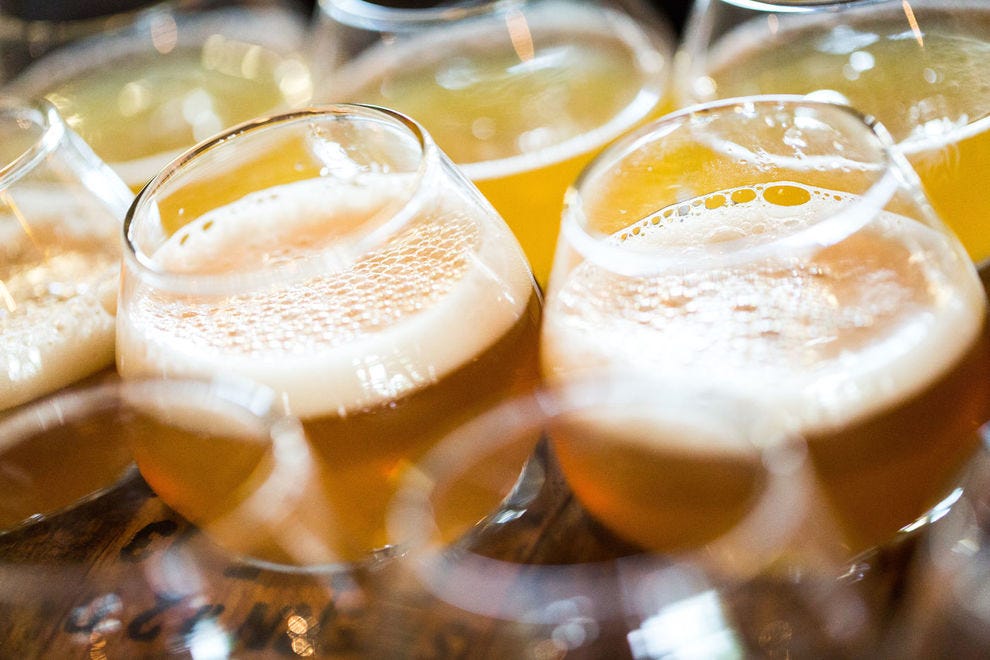 Maine enjoys a reputation as a hops-and-barley powerhouse. In postcard-pretty Blue Hill, the upscale eatery Arborvine draws culinary tourists from near and far.

The sons of Arborvine’s owners have opened Deep Water Brewing Co.,a solar powered three-barrel microbrewery behind the restaurant. They brew a number of styles that they frequently rotate, with a noticeable lean towards ales. Excellent pub food is served, including fried haddock and chips, a winning match with their Pale Ale.

Downward Dog with dogs: Do yoga with animals at these 10 hotels and retreats
How to get around Toronto like a local
Cafeteria culture in Indiana: try the ultimate comfort food
2022 gift guide: 10 best gifts for families who love to travel
The 3 Best Rye Whiskeys For Fall 2022