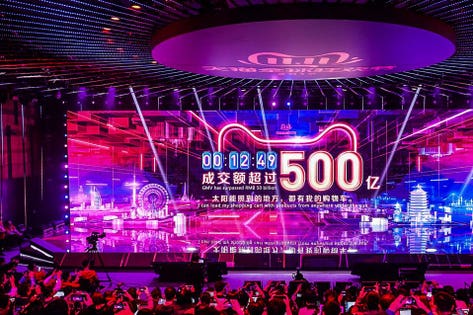 Alibaba, the parent company of online retailers including Taobao and Tmall, made record sales of $30.8 billion within 24 hours on Singles Day in 2018, and is expected to do even better this year.

The holiday has been a key battle ground for both Chinese and international food and beverage companies trying to take a bigger stake in the country’s e-commerce market that is set to reach $1.99tn in 2019.

But analysts are concerned that the ongoing trade tensions between the two largest global economies in connection with the increasing nationalistic spending in China will hurt the sales of U.S. CPG brands on Singles Day this year.

A recent survey by American consulting firm AlixPartners revealed that 70% of respondents believe the trade war will impact their overall purchasing, while more than half of them cited national loyalty as the main reason for not buying American brands.

“Most Chinese consumers seem to prefer local brands in general, with no change to this preference over foreign brands,” it said.

Another survey by London-based Brunswick Group showed 56% of Chinese consumers say they have avoided purchasing an American product to show support for their country.

However, “nearly all American and Chinese consumers say that addressing bilateral trade is a priority for their countries,” it noted. “Few believe a trade agreement will be signed in the next three months, but majorities believe a deal will be reached within the next year.”

The trade war does not seem to prevent U.S. snack companies from continuing their expansion in China. Instead, they are increasingly looking for ways to better serve local consumers’ needs.

Mondelēz, which debuted spicy chicken wing- and wasabi-flavored Oreo in China last year, has recently partnered with Tmall Innovation Center to open a consumer-to-business innovation factory at its global R&D center in Suzhou this September.

The partnership has so far helped the company develop a mini Oreo assorted nuts snack, which will be on sale with special promotions during Singles Day.

Mondelēz earlier said this product comes in the form of Oreo cookies in combination with nuts and dried fruits, and it was created after analyzing the characteristics of the consumer group who likes to buy cookies.

“Relevant data will be tracked to analyze its market performance,” the U.S. snacks company noted. “If the expected results are achieved, the new product will soon be promoted across the country through multiple channels.”

Mondelēz is also innovating partnerships with online influencers, such as internet celebrity live show, which is a “key component of our Double 11 promotion”, according to the company’s global head of strategic, insights and analytics Stefania Gvillo.

“We also unveiled a ‘Mondelēz overseas flagship store’ at Alibaba’s Tmall platform during November 11 [to provide] a new channel for Chinese consumers to have easier access to enjoy our great brands and products around the world,” she said.

Mondelēz declined to comment on US-China trade war’s impact on its sales.

While Mondelēz’s mini Oreo assorted nuts snack is being tested, CPG experts previously noted a lack of relevance with Chinese consumers has made it difficult for the company to gain share in China.

Oreo’s poor performance even caused Mondelēz to lose the most Chinese market share between 2015 and 2016, according to Mintel.

Lu Xiaorong, a 23-year-old pharmacist from China’s eastern Jiangsu Province, said, “I know Oreo and Stride are Mondelēz’s brands, but I almost never bought them.”

Instead, products from the largest domestic nut snacks brand Three Squirrels better suit her taste and enable a stronger emotional connection, she noted.

That is mainly because “plug and play” is not an ideal strategy for western food and beverage companies that want to expand in China, according to Andrew Kuiler, founder and CEO of Shanghai-based consumer insights firm The Silk Initiative.

“Slow and steady doesn’t win the race … Just slapping a Chinese name on your western products won’t either,” he said. “You have to be quick and nimble. [If you] look at ways of shaving months off the traditional western NPD process or else, you might be fighting a losing battle against Chinese companies that are quick to market, cashed up, and not afraid to fail.”

These international companies also need to know what their stakeholders – consumers, suppliers and government – want and how to please them, Kuiler added.

The Silk Initiative has previously helped to bring iconic Australian snack Arnott’s Biscuit to China. The brand was recently sold by Campbell Soup to private equity firm KKR for $2.2 billion.

The partnership, however, only lasted for a short period of time, according to people familiar with the matter.

Three Squirrels’ spokesperson Yin Xiang told me that their R&D team can better resonate with local shoppers’ preferences compared to foreign companies, saying, “we are able to complete the whole process from studying consumer behavior to putting a new product on shelf within 35 days, and continue to diversify [our portfolio] with new varieties afterwards”.

He told me via WeChat that the Mondelēz partnership is a “positive recognition of our company”.

“We realized how careful and studious [Mondelēz] is with its R&D process, but that can be a double-edged sword because it elongates the process of getting a new product onto the market,” Xin noted.

“We don’t rule out potential collaboration opportunities down the road,” he added.

Over the past six years, Three Squirrels has evolved from a pure e-commerce nut snacks player to including bakery and seaweed products, and mostly recently, a functional beverage line called the Second Brain – making it a one-stop shop for many Chinese millennial snack eaters.

However, the company acknowledges it has felt the heat from the trade tensions between the U.S. and China started in early 2018, and has since shifted its nut supply chain from the U.S. to other countries, including South Africa, Mexico and China.

Yin said: “In the past, 50% of our pecans came from the U.S., but lifted tariffs brought by the trade war has increased our raw material cost by 4%-8%, forcing us to source pecans from domestic markets such as Hefei, Chuzhou, and Wuwei instead.

“But that way, our products can now better deliver regional flavors and support local farmers.”

Three Squirrels expects its Singles Day revenues this year to surpass its 2018 record sales of $97 million.