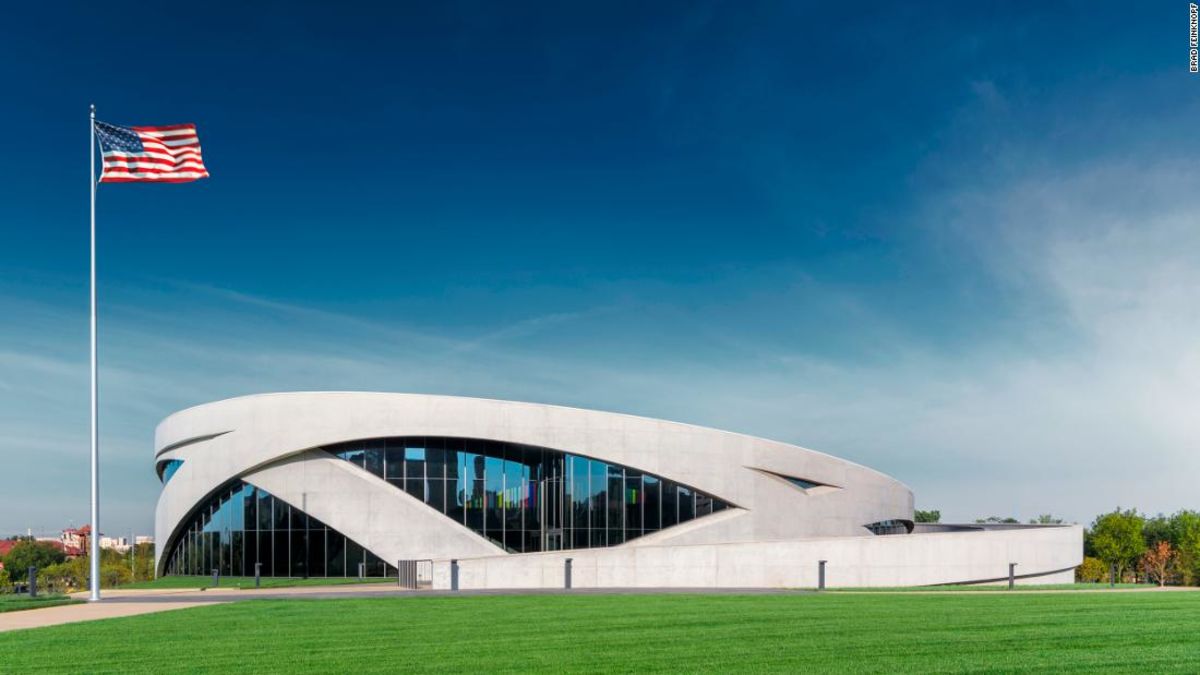 The National Veterans Memorial and Museum has a broader goal: to represent veterans — not just war.

War stories are present, of course, but they aren’t primary. Instead, there’s attention given to the decision to serve, training and boot camp, the sacred oath, deployment and personnel roles, separation from friends and family, survival, sacrifice and homecoming.

Columbus, Ohio’s capital and largest city, is where the National Veterans Memorial and Museum resides. The $82 million project opened in October 2018 after six years of planning and construction.

The museum received a national designation from Congress and President Donald Trump.

Museum participants, veterans whose stories are told through the various installations, and organizers believe that the narratives shared in the museum haven’t yet been told — not in this way, not this thoroughly.

Thank you for your service

The 53,000-square-foot facility sits along the Scioto River in downtown Columbus. The structure — envisioned by the late John Glenn and created by architecture and design firm Allied Works — includes an outdoor ceremonial space and rooftop sanctuary in the center of concentric concrete rings.

There’s enough open, uncrowded indoor and outdoor space for events and gatherings and for moments of quiet, individual reflection.

The National Veterans Memorial and Museum got its national designation from Congress and President Donald Trump in 2018.

The museum’s installations indicate that it is neither a war memorial nor a military museum. It is a space dedicated to the stories and experiences of all veterans. Theodore Roosevelt, a war hero, is in the museum, right next to someone you can’t find in a history book.

African American, Hispanic, Asian, men, women, poor, rich, famous politicians and virtually unknown people from every era — from the Revolutionary War to the war in Afghanistan — are represented and honored here.

Though many civilians might find it challenging to draw similarities across these wide-ranging periods of history, the NVMM stitches these stories together through video interviews, audio recordings, touchscreens, handwritten letters and a time line.

The military may not be a taboo topic, but it also isn’t the most accessible.

The exhibitions throughout the NVMM strive to not only honor veterans but also to educate civilians. Fewer men and women in service than ever before (less than 1% of the population, in fact) means fewer conversations about the military in general.

World War II, for example, saw 16 million people serving. In 2018, there are less than three million members of the Department of Defense, which includes those on active duty, reserves and in personnel roles.

The museum hopes to educate and inspire young people in its honoring of veterans.

Guy Worley, president of Columbus Downtown Development Corporation, wants the museum to “connect, inspire and educate” young people. Because the majority of the population in the United States hasn’t served in the military, Worley believes it’s important to foster an understanding between the groups.

Glenn was instrumental in bringing the NVMM to fruition and ensuring its place in educating the nonveteran community about how and why we enjoy our freedoms.

Because veterans’ stories are complicated and nuanced, the museum takes visitors on a multileg journey. The intention is not to convince people to enlist but to educate them on what it means to serve and maybe even to inspire different acts of service.

Col. Tom Moe, USAF retired, left behind a wife and 3-month-old daughter when he set off for Vietnam. Moe was a prisoner of war for more than five years, but his homecoming is as much a part of his journey as the torturous years he endured as a prisoner.

He’s been involved in the NVMM from the beginning and believes it’s essential for those who have no contact with the military to “really understand the impact that veterans have on society, the positive impact.”

Moe’s decision to enter the Air Force can be traced back to family members who fought in World War II. Moe says he wanted “to try to do for the people in Vietnam what my dad and relatives had done to liberate Germany and Japan and so forth … ”

When Moe stands before a replica of his war trunk in the museum, he pauses before acknowledging the role his wife, Chris, a civilian, played in his service. It’s one of many elements in the museum attempting to “show the family side” that he believes can help connect veterans and civilians.

Visitors stopping at the war trunks can open the lid and hear both Col. Moe and Chris, his wife of 53 years, speaking. Photographs of the couple through the years string together a cohesive narrative.

The history of the military is featured in a timeline installation that sits opposite interactive features.

Jaspen Boothe, a disabled Army veteran who served for 17 years, first as an 88 Mike (or truck driver), and then as a human resources officer in the ROTC (a college program that prepares young adults for the military), says she was surprised when asked to be a part of the museum’s creation.

Not having deployed to Iraq or Afghanistan, Boothe says she didn’t hold what many consider a “sexy” military job.

It was a cancer diagnosis, however, that kept Boothe behind a desk and not in the field, but she doesn’t view her role as one of diminished importance and doesn’t think anyone else should either.

After the NVMM made its intentions clear — to be a museum depicting the total military experience for anyone of any role, gender, rank and era — Boothe was on board.

“I think that everyone who’s worn the uniform has a story, and it’s important that all those stories are told,” Boothe says.

For her, the decision to serve her country had a lot to do with honor, a word that deserves to be spoken with care. Boothe believed that if she pursued the “challenging and honorable” profession, proving wrong the single mom stereotype, her son would “know that he could accomplish anything that he wanted to as well as long as he was dedicated and disciplined to the task.”

The museum strives to tell the whole veteran story — not just one of war.

Jason Dominguez, who served in the Marines and deployed to Iraq, has also been an active participant in the museum since its inception. Like Moe, Dominguez was inspired by the people who came before him. As far back as he can remember, he wanted to serve his country.

What he found in the Marine Corps was a diverse group of people from various backgrounds and circumstances who shared at least one thing in common: the decision to serve.

“We’re all green here. We’re all green,” Dominguez says, thinking back to his early days in the Marines, where all the “colors of the rainbow” existed together. In spite of these outward differences, Dominguez says the only thing that mattered was that they were in it together, solving problems and overcoming challenges.

Similarly, tangible items such as real war packs, uniforms and personnel trunks, may appear different from the outside, but they’re more alike than different. Museum visitors can try on pieces of the various military uniforms and pick up the heavy military packs carried by soldiers as they take notice of themselves in the full-length mirror that is also a part of this intimate interactive.

When Dominguez and his wife, Raven, walked through the museum for the first time, she expressed surprise upon seeing a Civil War sack. “That’s crazy,” she exclaims wide-eyed.

Dominguez stopped at the footlocker exhibit. “I love seeing footlockers from the different eras,” he said pointing to Iraq’s plastic locker and another sturdier one from the Vietnam War.

“Honey, I miss you. How are the kids? Can’t wait to come home. The food stinks. I’m cold, send me more socks.” Relatable thoughts, needs and wants. Veterans can empathize, and civilians can sympathize.

Visitors can linger on the historic time line to the left as they make their way around the circular museum space, or they can take their time with the many interactive components on the right, closer to the periphery of the space.

This is where the Taking the Oath section lives.

Dominguez remembered taking the oath. He likened it to getting married.

“You’re making a commitment to something that’s bigger than yourself,” he said, adding that “there are many who are born under our flag, but there are a few who actually choose to become a part of it.”

Instead of displaying stories of war and commemorating the men and women who fought and stopping there, the NVMM continues the narrative. What was it like for soldiers to return home after the fight? What do those reunions look like?

Moe’s homecoming, for example, meant, in part, reintroducing himself to his daughter. It meant returning to Chris, who’d been responsible for raising their daughter for years by herself.

About that return: Moe never faltered in his belief that it would happen.

“I never had any doubts that I would come home,” Moe says, growing emotional when he talks about friends who weren’t as fortunate. To him, the museum memorializes the fallen, the men and women who died for their country.

These losses are the most meaningful piece of Moe’s service. Not his survival as a POW, not his resilience in the face of a complicated and emotional time in the US. Not his work post-service for Notre Dame’s ROTC program. No, it’s the men and women he lost. The lives America lost.

Boothe’s experience differs from Moe’s, and yet it too, like so many individual pieces of the veteran experience, shares a common denominator: compassion.

The founder of Final Salute, an organization dedicated to providing safe and suitable housing to homeless women veterans and their children, Boothe saw firsthand the lack of supportive services available to women veterans and decided to do something about it.

“I took an oath 17 years ago to never leave a fallen comrade, so it’s just me doing my part,” Boothe explained. “If everyone did something, then there would be nothing left to do, and the world would be a better place.”

The National Veterans Memorial and Museum is in Columbus, Ohio. The Midwestern city is within a one-day drive or a one-hour flight for a large portion of the United States and Canada. John Glenn Columbus International Airport has several daily flight options.The museum is open 10 a.m-5 p.m. Wednesday through Sunday but will be open on Monday, November 11, in observance of Veterans Day.
This article was originally published by Cnn.com. Read the original article here.
Share on Facebook
Share on Twitter
Share on Pinterest
Share on LinkedIn

A 5,000-Year-Old Cheesemaking Tradition In Armenia
Ugly Tourists in California: 3 Ways to Upset a Californian
Meet the Hendo behind Hendo’s Hideout in the British Virgin Islands
Welcome To The Year Of Yaupon Tea
The 6 best things to do with kids at Everglades National Park