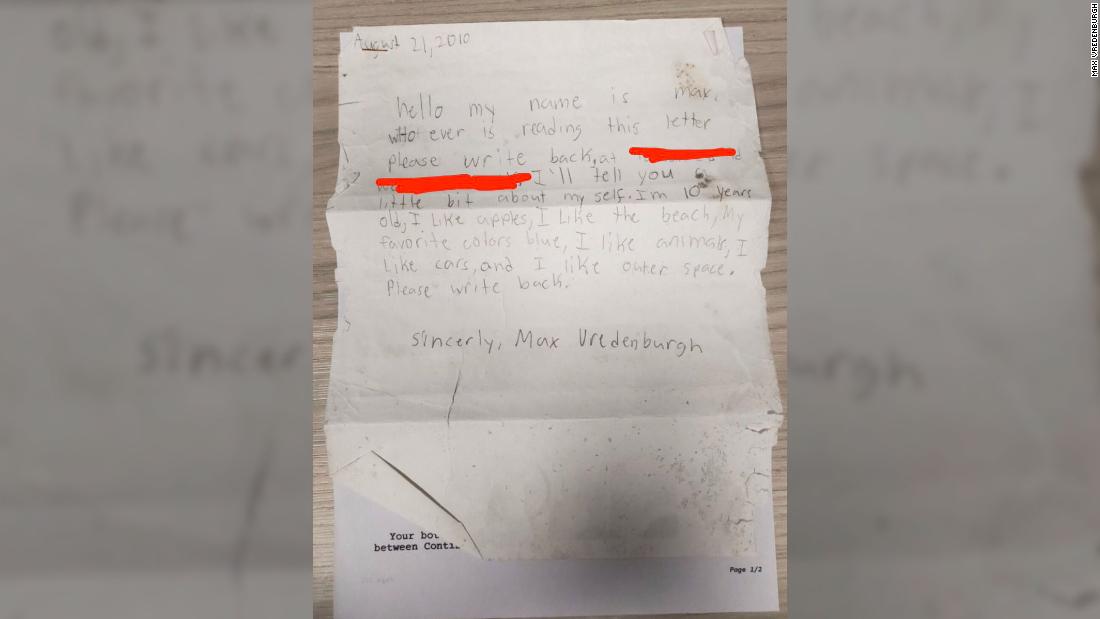 Travel
Share on Facebook
Share on Twitter
Share on Pinterest
Share on LinkedIn
He had to wait nine years, but he finally heard back.
The now 19-year-old college student from Massachusetts says he completely forgot about sending the message in a bottle until his dad sent a photo of the letter — and the reply — in a group text.
“My parents always saved things from our childhood, so I didn’t think much about it,” he told CNN on Monday. “Then I read the letter from the recipient, and my heart just dropped.”
Vredenburgh wrote the original letter August 21, 2010. He and his father threw the bottle into the ocean at Long Beach in Rockport, Massachusetts.
He wanted whoever received his message to know a little bit about himself.
“I like apples,” the letter says. “I like the beach, my favorite color’s blue, I like animals, I like cars, and I like outer space.”
It was pretty standard kid stuff, but he was smart enough to leave his address and a plea to please write back.
The bottle had washed up on a beach in France, between Contis and Mimizan. “G. Dubois” wrote back after it was found on October 10.
“It will have taken 9 years to cover the 6000 kms that separates us,” the letter says. “You had grown a lot during that time: 10 to 19 years old.”
Vredenburgh was shocked. He couldn’t believe someone was kind enough to give him a response back. He plans to get in touch with the letter writer and thank him for responding.
“Something like this just will not happen for the rest of my life,” he said.
This article was originally published by Cnn.com. Read the original article here.
Share on Facebook
Share on Twitter
Share on Pinterest
Share on LinkedIn