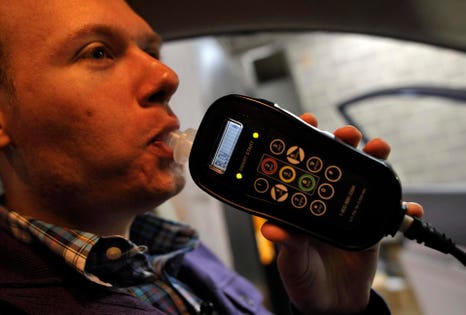 The time for celebration as well as heavily trafficked roadways is approaching fast. You should never be in this position, but if you find yourself mandatorily breathing into a machine, start thinking about finding a lawyer schooled in Driving Under the Influence (DUI). According to multiple sources–including said lawyers, some police and some judges–those gadgets are not necessarily reliable.

About two weeks ago, Stacy Cowley and Jessica Silver-Greenberg wrote in the New York Times: “A million Americans a year are arrested for drunken driving…By the side of the road or at the police station, drivers blow into a miniature science lab that estimates the concentration of alcohol in their blood.”

If that scientific device known as a breathalyzer tells U.S. law enforcement your blood alcohol level is 0.08 (0.05 in Utah), you may become a criminal, whether or not you had a drink before getting into your car. How is that possible?

Without being technical, this is how the breathalyzer operates: Our blood carries oxygen through our body. When we drink alcohol it is absorbed via the stomach into the bloodstream and goes along for the ride, which includes making a landing in our lungs. Breathe into the machine and alcohol travels with the lung air. The machine calculates the level of alcohol dissolved in oxygen in that breath—that is the Blood Alcohol Level (BAC).

How long it takes for a person to reach the legal BAC limit depends on how much alcohol is consumed; it also depends on individual metabolism, which has to do with age and weight relative to height, not to mention health. In the end, a breath test is really an estimation of BAC. A blood test provides more accuracy. Still, the breathalyzer is used at roadside and police stations to make a determination.

The Times investigation included interviews of more than 100 lawyers, scientists, executives and police officers; court records were perused, as well as corporate filings, emails and contracts. The investigation found that breathalyzers generate quite a few inaccurate results. The article states “Judges in Massachusetts and New Jersey have thrown out more than 30,000 breath tests in the past 12 months alone, largely because of human errors and lax governmental oversight.”

A market for the devices for personal use exists that offers what many believe are questionable accuracy claims. The National Motorists Association (NMA) says the breathalyzer process is neither scientific nor fair, citing a wide variation in results from person to person. NMA claims the breathalyzer suffers from a 50% margin of error.

Part of the problem is the high sensitivity of the machine—it must be calibrated and that must be done properly. The Times investigation found results from poorly calibrated breathalyzers as much as 40% too high in BAC. The investigation also found that police departments responsible for maintaining the machines often lack the expertise, and the labs they use may or may not be any better at it. But sometimes, it’s the machine itself at fault; that’s what a study done many years ago discovered with one breathalyzer—Intozilyzer 5000. The study results were submitted by Stefan Rose, M.D. and Kenneth G. Furton, Ph.D. for the Department of Chemistry and International Forensic Research Institute, Florida International University.

The World Health Organization has been calling for lowering BAC–what started out as 0.10 is now mostly 0.08, but as in Utah and abroad, 0.05. The direction is clear, and it is probably a matter of time before 0.0 will be it. That makes this subject important, because compounding the problem of inaccurate alcohol readings is the fact that a number of substances found in human breath can have similar molecular structures to ethyl alcohol—acetone is one of them.

Titled The Likelihood of Alcohol Interference in Breath Alcohol Measurement, the National Highway Traffic Safety Administration reported that dieters and diabetics may have a high concentration of acetone in their breath, and that can initiate a false Breathalyzer reading. Other possible influences on the machines include having inhaled chemicals from paint, cleaning compounds and gasoline, not to mention having eaten bread (bad yeast activity) or having just come from a heavy workout at the gym (can produce the same level of ketones that dieters and diabetics produce, which leads to acetone).

Still, get stopped on the road on suspicion of driving while intoxicated in just about any state and a breathalyzer test may be unavoidable. If you refuse you may be treated as a criminal, and if you take the test and fail, you are guilty in some states where laws treat the failure as irrefutable evidence.

NMA claims, “In no case should breath alcohol content be considered an accurate measurement of blood alcohol content or the degree of impairment…The desire to eradicate the deaths, injuries and property damage associated with drunk driving does not excuse the courts or legislatures from their duty to provide just laws that are fairly administered.”

What to do in Las Vegas that ISN’T Gambling
How to Prepare Your Home Before You Travel
A postcard from the Austrian Alps: my ski trip to Gurgl in pics
Best Cities for Long Layovers
Ube— The Uber Ingredient Of 2023