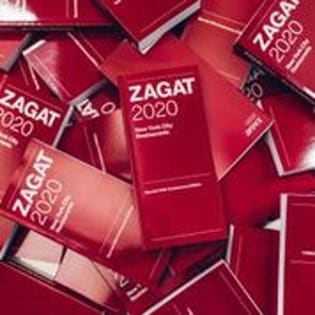 “People have been asking for it since I started here two years ago!” said Macrae Forrest, a bookseller at Posman Books at Rockefeller Center. In my hands, I was cradling the new Zagat 2020 New York City Restaurants guidebook, the same looking paperback that helped me navigate the New York restaurant maze when I landed here in the 1980s.

Indeed, The Infatuation, Zagat’s owner since 2018, has just released a print edition of the guide to mark its 40th Anniversary. The survey was available online at zagat.com but had not been printed since 2016.

For someone like me who treasures the touch and “weight” of books, it’s good news, but it’s important on many levels. First, it tells us that books are still relevant, and that not everyone wants to read on a screen. It also means that this is one guide that has a following. It can be trusted; its method is transparent—no mysterious inspectors or under the table freebies—and even though only about 12,000 people participated in this year’s survey, they produced 200,000 ratings and reviews. Ratings are based on feedback by diners for diners. Reviews use quotes excerpted from diners’ comments. Those are then fact-checked and combined to reflect the overall feeling about a restaurant.

And the overall winner, this year, is Chef Eric Ripert’s Le Bernardin, which lands in first place as the most popular restaurant with one of the highest food ratings (others are Daniel, Bouley at Home and Sushi Nakazawa.

“It’s fabulous to see the print edition again,” said Ripert, “Zagat is a New York institution, and this is a wonderful recognition for our whole team.”

Founded in 1979 by Nina and Tim Zagat, the brand was sold to Google in 2011 and then to The Infatuation, the restaurant-discovery and review platform.

“From the moment we acquired the brand,” said Chris Stang, co-founder of The Infatuation and CEO, Zagat, “We were asked to bring the print edition back.” It’s unclear whether this will become a yearly endeavor but “We hope so. We are old school and we still believe in the power of books,” he added.

“Books are not dead,” said Tim Zagat. “In fact, the print edition is much more user-friendly than the online survey.”

The guidebook sells for $17.95 and so far, 60,000 books have been printed. This edition’s content is entirely new and includes an interesting foreword by restaurateur Danny Meyer as well as short summaries of each decade—who can forget the marvelous boudin aux pommes at Florent?

How to ensure the team starts working on the 2021 edition? Grab a few at your local independent bookstore and sign up here if you want to become a reviewer! I know I will.