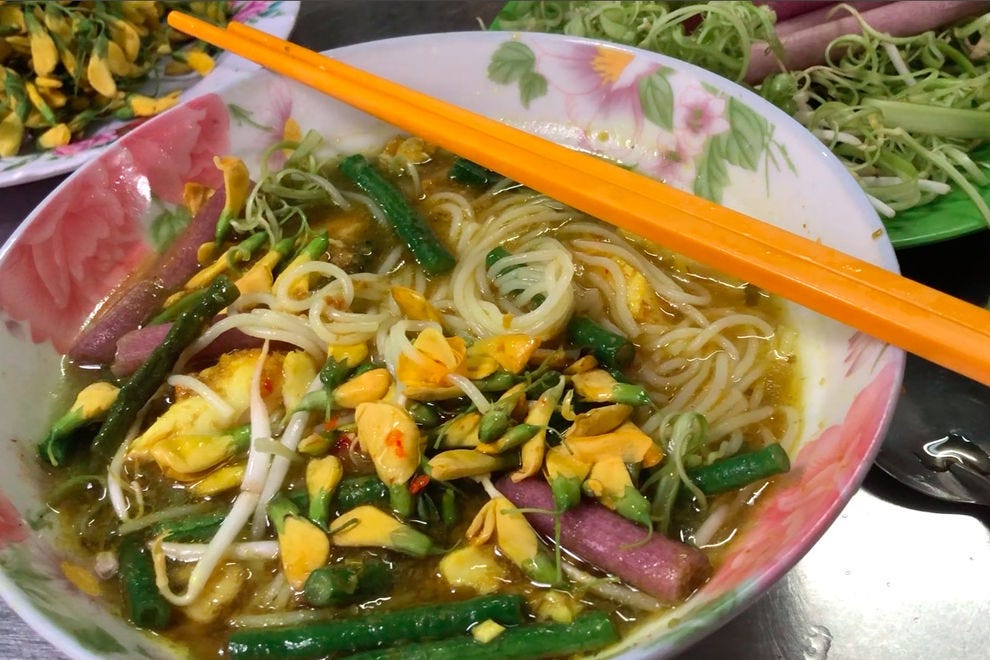 A Vietnamese man’s poking his head under a stretched-out tarp as the Ho Chi Minh City rain steadily beats down. Some 20 steel bowls, splayed out in this back-alley market stand, house a colorful mix of ingredients: cheese-like egg noodles the color of cheddar, baby tamarinds, mung beans, palm tree sap congealed into jelly bean-like jaggery, and one platter of a plump pumpkin flan.

“Cambodian che,” says the smiling woman. Her family has run Co Co, a stand that’s been selling Khmer-style sweet soups for over a half century.

The man seems surprised it isn’t the usual Vietnamese che, a popular sweet soup, and sits for a late-morning dessert.

The city of nine million is well-known for its street food scene of crispy baguette banh mi, beef noodle pho and sizzling banh xeo pancakes. What’s surprising to many visitors (and many locals too) is the grip Khmer-inspired cooking has on the local diet as well.

In the 1960s, Saigon fell for hu tieu Nam Vang, a tasty pork-and-prawn breakfast soup named for the local word for “Phnom Penh,” that’s served with chewy tapioca-strip noodles. Today, it’s Khmer roots are all but forgotten as the soup is almost as ubiquitous as pho and found across town from simple family-run eateries and unmarked street stalls that serve hot bowls until they run out (usually about 10 am).

And there’s more than hu tieu, beginning with the city name.

During the peak of the Khmer Empire, which flourished between the ninth and 13th centuries, present-day Saigon was known as Prey Nokor, a modest Khmer fishing village named “forest city.” Eventually, the Vietnamese filtered in, similarly christening it “Sai Gon,” meaning “twigs” and “bole” (or trunk) for the forest of cotton trees the Khmer planted.

Centuries later, during the Khmer Rouge regime, thousands of Cambodians and Vietnamese-Cambodians immigrated to southern Vietnam. The man I witnessed dodging the rain at the che stand was in the heart of the original “Cambodian Saigon,” a couple miles west of the center at District 10’s Le Hong Phong Market.

Filling back alleys, the market has a grab bag of stands selling fresh fish and produce, counterfeit designer clothing, pots and cups, corn, milk tea, coffee, lots of fresh flowers and also a dozen stands serving authentic Khmer specialties. With a quick wander, I zeroed in on something else: rows of dried fish imported from Cambodia’s Tonlé Sap Lake. They’re situated beside a packed noodle shop serving Khmer-style bowls of bun num bo choc, which I’ve come to try for the first time.

It’s 9:30 am on a Tuesday and I’ve just missed the day’s last bowl from the most famous eatery, Tu Xe. But there are other popular options, and I stop in at a nearby spot set up in the alley with a sign reading “bun ca Campuchia” (fish noodle Cambodia).

A couple of families sit on red plastic stools at the two tables set under a tarp. The one-woman operation is run with plenty of gusto by Ms Dieu, who wears black pants and a black T-shirt that reads “Directed by David Lynch” in a stylized font. I order, then pause to watch her readying a series of portions.

I turn to see a perky gray-haired man eating at the table smiling my way. He and the other diners are making room for me to get away from the rain’s splash off the pavement. Soon Dieu sets down a bowl of noodles in front of me.

The broth is gold-brown from the turmeric, and made of kaffir limes that give a sweet-sour taste. Mixed in is Cambodian prahok fish paste, sautéed green beans and chunks of juicy, boiled snakehead fish. And it’s delivered with colorful extras on side plates: long, purplish stems of water lilies, and bright yellow sesban flowers, which grow along the backwater shorelines of the Mekong Delta during rainy season.

It’s certainly delicious. When I’m halfway through, Dieu appears to plop several more pieces of fish in my broth. (At 40,000 Vietnamese dong, about $1.75, this is a generous deal.)

As I eat, a young English-speaking daughter of a local family jots down local names of ingredients I didn’t know (sesban is dien-dien, water lily is bong sung), while another woman pulls a kaffir lime out of her bag, slices it, shows me how to eat it with chili-salt, then hands me another lime to take on the road.

Afterwards, I venture back into the drizzle to chase my breakfast with a che sweet soup at Co Co. The pick-and-point menu has 20 options and I settle for the catch-all “Cambodia che” for VND20,000 (about 85 cents). A bowl soon comes filled with crushed ice to chill a tasty mix of pumpkin, palm sugar, egg noodles, salted egg and durian sauce (the latter’s normally pungent taste softened by the coconut milk).

And after two stops, my Khmer breakfast in Saigon is done. I’m positively stuffed. Next time, I’m leaving room for a dried snakefish. 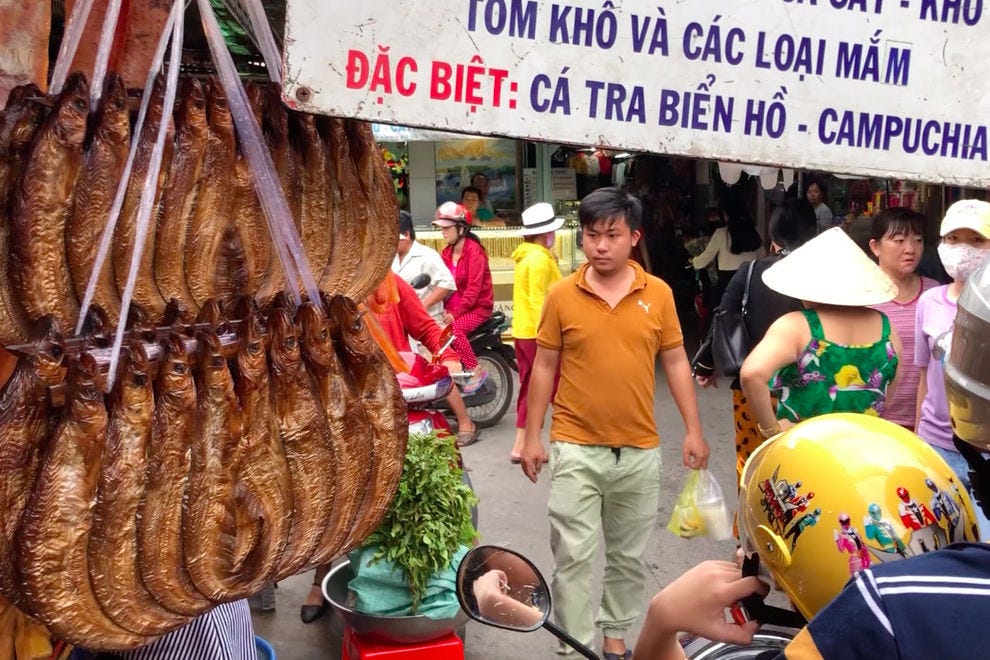 In the heart of the market’s alleys, Bun Num Bo Choc Tu Xe – set up by a Cambodian who immigrated here in the 1970s – is the most popular place for fish noodle soup, but arrive early as they run out by 9 am or 9:30 am. It opens at 6 am.

For Khmer-style che, the nearby Co Co is run by a Vietnamese family who briefly relocated from Saigon to Cambodia during the Vietnam War. Everything’s made fresh daily. It’s open from 6 am to about 6 pm.