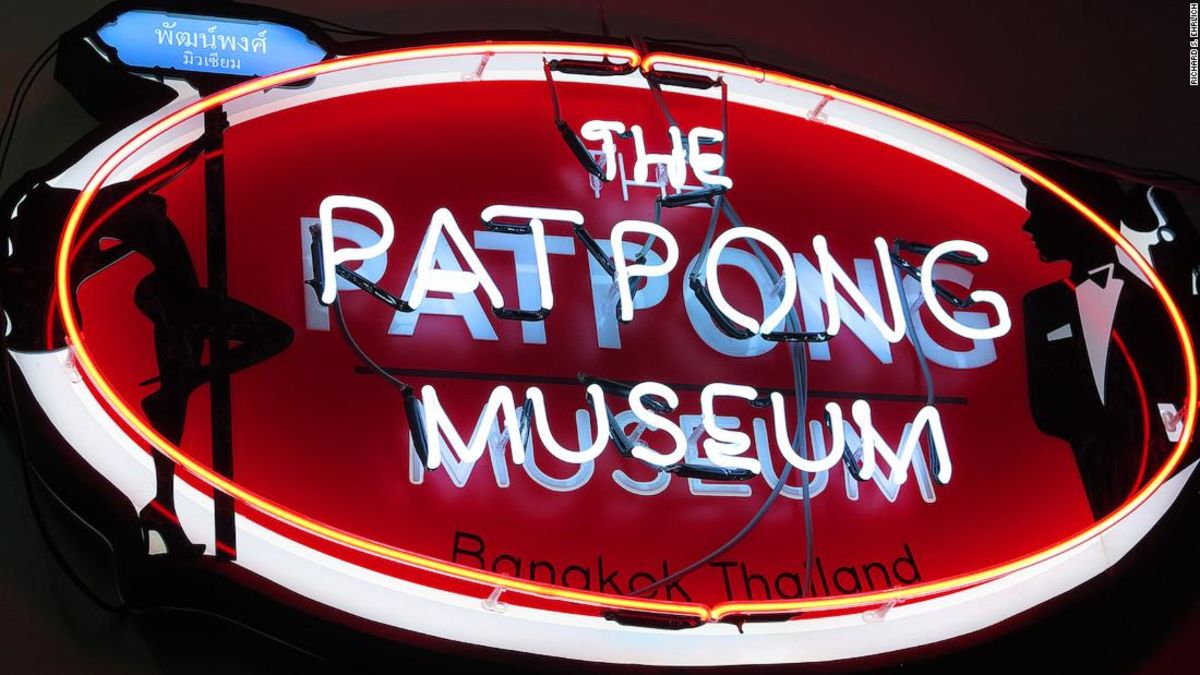 Bangkok (CNN) — Prostitution, the CIA, the Vietnam War and Chinese immigration are all on display in a new museum dedicated to one of Bangkok’s most famous red light nightlife zones, Patpong Road.

Alongside “Triple X,” “fetish” and kinky cabaret exhibits are tamer displays highlighting David Bowie’s 1983 visit to Bangkok, as well as other bits of pop culture, including a nod to “The Deer Hunter” — a 1978 war drama starring Robert De Niro that included scenes reportedly shot in former Patpong bar Mississippi Queen.

But documenting Patpong’s unofficial ties to the US Central Intelligence Agency’s deadly activities in Laos during the US-Vietnam War in the 1960s until 1974 is the museum’s most fascinating purpose.

The 300-square-meter Patpong Museum, which opened in October, reveals why Americans fighting communists on battlefields flocked to Patpong for business, friendship and hedonistic trysts during the war.

It also shows how Patpong evolved over time to attract hundreds of thousands of tourists and expats, before most of the action moved across town to bars elsewhere in Bangkok — namely Soi Cowboy and the Nana Entertainment Plaza.

The lesser known side of Patpong

The museum’s founder and curator, Michael Messner, tells CNN Travel he founded the space to document and display the area’s fascinating history up to the present day, and include the many details that no one knows have gone into creating such unusual facilities, businesses and venues.

“I’d say today everybody knows Patpong,” says Messner. “But nobody really knows what Patpong is about. People associate it with a very narrow segment today, and it would be ‘Patpong ping-pong,’ something like this. And we’ll get to ping-pong, we’ll show that too, but there is so much more.”

Messner is well placed to open such a venue. After managing a museum in Austria in the 1990s, he says he turned his attention to Bangkok’s nightlife, investing in entertainment venues including some in Patpong.

Patpong Road’s origins date back to a Chinese immigrant, Luang Patpongpanich, who purchased the land when it was a banana plantation.

The museum displays two heavy rice bags connected by a bamboo pole for visitors to lift, a way to experience the burden felt by laborers shouldering 35-kilogram loads.

The OSS trained Udom to be a Seri Thai (“Free Thai”) insurgent against Japan’s occupation of Thailand, according to museum information, which is supported by a three-page story in Asia Magazine dated May 5, 1985 which includes an interview with Udom, and also in a 1996 obituary in London’s Guardian newspaper.

But the war ended before he returned home.

After Udom arrived in Bangkok, he transformed his family’s land into Patpong Road and lined it with shop houses, which he rented to his OSS and CIA friends, Messner says.

“Mizu’s Kitchen is the first food and beverage place in Patpong, run by a Japanese ex-soldier who was part of the occupational force but he liked it here so much that he wanted to stay,” he reveals.

“The Foreign Correspondents’ Club’s first office or first meeting place was actually at Mizu’s Kitchen. It just closed its doors this year, about three months ago, and we rescued the signage outside,” Messner adds, gesturing at its weather-beaten sign.

Other Patpong tenants during those years, according to museum exhibits, included the US Information Service library and “a CIA safe house” above the Madrid Bar where, in later years, retired CIA officials reportedly drank and met buddies.

Alongside these bits of info, the museum displays photos of late CIA officer Jack Shirley taken in the Madrid Bar, which is still open.

“Tenants also included IBM, Shell, and CAT — Civil Air Transport — a company owned 100% by the CIA,” says Messner. “It’s an airline that did covert operations throughout Asia from 1950 to 1959.”
CAT became precursor to the CIA’s proprietary Air America, known as “the world’s most shot-at airline,” especially in Laos while transporting troops, casualties, refugees, ammunition, rice and other supplies — all part of the US covert war against communism.

Exhibitions include this piece of anti-communist propaganda produced by the Thai government during the 1970s.

Air America’s Bangkok office was in the Air France building on Patpong until 1972.

At least 240 Air America pilots and crew members died from enemy fire, according to multiple reports.

A news clipping, displayed in the museum, quotes a US congressman’s 1972 allegations that some pilots smuggled Lao opium for refinement into heroin for American pushers, which Air America pilots have denied. That account has been romanticized in movies and books — which the CIA calls “a distorted view,” blaming the image created by a 1990 film, “Air America.”

“Secret wars… a secret service airline that had its headquarters in Patpong Road,” says Messner. “And with it, of course, came the people that worked for this airline, and they started to hang out here. There are many things we have been given by an ex-Air America pilot throughout the exhibition.”

Among these is a typewritten letter with an Air America logo from 3 Patpong Road telling parents their son disappeared after a plane was shot down above Laos in 1963.

The legend of Tony Poe

Inside the museum, a corner is dedicated to a man who’s widely considered to be the world’s most macabre CIA paramilitary officer, Tony Poshepny — “one of the most famous and controversial characters that have visited Patpong often,” says Messner.

According to the museum’s timeline of Patpong history, he joined SEA Supply, a CIA front company operating out of Patpong, in 1958. But he “visited the Civil Air Transport (CAT) offices in building number 1 on Patpong Road as early as 1953 and was a frequent visitor throughout the years until his departure to the United States in the 1990s,” Messner says.

Popularly known as Tony Poe, he was based in northern Laos for several years, beginning in the early 1960s, and reportedly led thousands of minority ethnic Hmong in bloody, scattered fighting against communist Pathet Lao forces and their North Vietnamese allies.

To confirm that his Hmong rebels were killing Pathet Lao, Poe ordered them to start “cutting off people’s ears and heads,” says Messner.

When the American Embassy in Laos criticized Poe for his violent methods, he took some hacked-off ears, “put them in a bag, and sent that” to then-Ambassador G. McMurtrie Godley, shocking the diplomat and his staff.

Poe also took “cut-off heads and threw them out of helicopters at least on two occasions” at high-ranking Pathet Lao, Messner says.

As shocking as these allegations are, Poe himself confirmed these well-known acts to this reporter during an interview in San Francisco in 2001 and others before he died in 2003.

It was “psychological warfare,” says Messner, pointing to photos, weapons and other items symbolizing America’s war in Laos, Cambodia and Vietnam.

“This is five ears, human ears, cut off and assembled on a chain so you could wear it on a necklace or something,” he notes, referring to a nearby display featuring fake rubber ears — an artistic interpretation of Poe’s order to his Hmong fighters to cut off ears.

Poe didn’t create such a necklace or wear one but, Messner says, the “cut-off ears are a fact established by many first hand sources, and became part of the myth around Poe. We take the liberty to communicate that visually in a way that is impactful to the viewer.”

A Patpong Museum would not be complete without exhibitions documenting the road’s most famous attractions.

The museum recreates a slice of Patpong’s former Grand Prix bar, including a 3-D projection of a bikini-clad go-go dancer.

Elsewhere a woman’s silhouette has, between her thighs, an industrial-strength ping-pong training machine, which pumps white balls at viewers to catch.

“Here on Patpong, everybody wants to see the ping-pong show,” says Messner.

Instead of portraying a live woman, who doesn’t use a machine, the museum constructed this “interactive” display.

Other displays that may make some visitors uncomfortable include a video featuring a bar worker preparing to perform with a live goldfish during a 2013 bestiality show.

Elsewhere, a wall-mounted “game” invites visitors to look at photos of Thai women and guess if they were born female.

But the museum and its exhibits aren’t impressing everyone — a near certainty given the subject matter.

Bangkok-based journalist Tom Vater is among those expressing mixed feelings about the space.

“The US killed some four million people during its wars in Southeast Asia when Patpong was in full bloom,” says Vater, co-writer of the documentary film, “The Most Secret Place on Earth: America’s Covert War in Laos.”

“I went [to Patpong] several times during the film’s research, particularly to the Crown Royal Bar and the Madrid Bar to talk to ex-CIA, USAID and Air America staff,” he says.

“Most of the former soldiers, pilots, secret service staff and mercenaries I met were polite, helpful and very open about their wartime experiences. The men who frequented the bars in Patpong were, as often as not, murderers engaged in crimes against humanity. That should give pause for thought about what kind of museum might be established here.”

In response to criticism about his museum, Messner notes that the Vietnam War is an established fact in history.

“People die in war, and in today’s world this becomes more and more an abstract thing,” he says.

“Giving the war and the killing a face, creating controversy, that is the objective of a living museum. We do not condemn or glorify Tony Poe and anyone involved in the war.”

Ugly Tourists in California: 3 Ways to Upset a Californian
Where to Kick off Your 2023 Summer Travel
Visit the Home of Punxsutawney Phil for Groundhog Day
Travel companies are ‘greenwashing’ — here are 3 ways to find ones that aren’t
11 Surprising Chemicals Used In Domino’s, Taco Bell, and Other Fast Foods | Food Wars