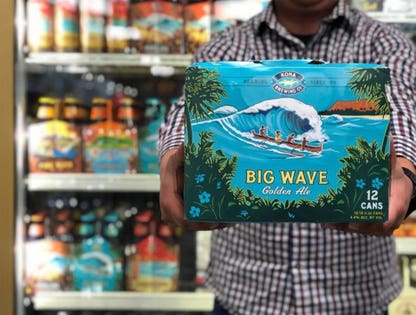 For proof, look no further than this week’s announcement that Anheuser-Busch InBev had agreed to wholly-acquire the Portland, Oregon-headquartered maker of Kona, Widmer, and Redhook beers, among others.

“We’ve all been through ups and downs in a relationship,” he said. “Sometimes, you get so used to each other and you don’t realize what makes the relationship unique.”

Before we dive into the backstory of these two companies, let’s examine some of the highlights of this week’s merger announcement.

As part of the cash transaction, which is expected to close in 2020 following a mandatory federal antitrust review, A-B will purchase the remaining 68.8% of CBA that it doesn’t already own for $16.50 per share. That works out to approximately $221 million, excluding about $130 million in liabilities that A-B will also be responsible for.

A-B’s offer of $16.50 per share values CBA at approximately $321 million, or roughly $290 per barrel according to Cowen and Company’s Vivien Azer. The Kona brand itself, which makes up about two-thirds of CBA’s volume, is valued at about $445 per barrel, Azer noted. By comparison, the Ballast Point brand sold for nearly $3,500 per barrel back in 2015.

All-in, A-B will spend roughly $351 million for the right to own and control the seventh largest craft brewing company in the U.S., something that Thomas heralded as a “solid win” for all CBA stakeholders during the company’s third quarter earnings call on Wednesday.

Collectively, those 21 different brands account for more than 2 million barrels of craft beer, or roughly 1% of all beer shipped by domestic brewers in 2018 (166 million barrels).

Once finalized, CBA’s NASDAQ ticker “BREW” would also be delisted, and the company that once traded under the “HOOK” symbol will officially become part of “BUD.”

But to fully understand how the world’s largest beer company could finally come to wholly-own some of the world’s most iconic beer labels – two of which are more than three decades old and helped create the craft beer category we know today – you’ve got to travel back to 1994. That’s when Widmer and Redhook sold minority stakes to A-B in exchange for guaranteed access to the brewing giant’s vast network of beer wholesalers across the country.

At the time, it gave Widmer and Redhook an opportunity to reach new customers throughout the U.S., but it also laid the groundwork for A-B’s eventual acquisition 25 years later.

CBA was officially formed in July 2008 via the merger of Redhook and Widmer (the same year InBev acquired A-B).

Around the same time, executives at A-B began witnessing the consumer shift toward craft beer – sales grew 13% in 2011 — and the brewing giant purchased Chicago’s Goose Island for $38.8 million. CBA actually owned 42 percent of Goose Island at the time, and agreed to sell its stake to A-B for $16.3 million in cash.

The 2011 Goose Island acquisitions would go on to define the most recent decade in brewing, setting off a wave of craft brewery transactions over the next 8 1/2 years. At the same time, production of U.S. craft beer more than doubled, to about 26 million barrels in 2018, according to industry trade group the Brewers Association.

Realizing it would need more than one small brewery to compete in the fast-growing craft beer segment, A-B went on a buying spree. It purchased eight more craft beer companies over the next five years and officially established a “high end” division tasked with selling and promoting more expensive brews.

In 2016, A-B restructured its distribution and contract brewing arrangement with CBA, building a framework for a buyout in the process. Under the terms of their renegotiated commercial agreement, A-B said it would pay as much as $24.50 per share to acquire CBA by August 23, 2019.

Thomas immediately got to work positioning the company for an eventual sale to A-B, while simultaneously preparing for the possibility that a deal would never materialize. In 2017, CBA terminated a contract brewing arrangement with Pabst and sold its production facility in Woodinville, Washington. In 2018, CBA spent $45 million to acquire AMB, Cisco and Wynwood. And in early 2019, it established an innovation unit – called the pH Experiment – that was tasked with expanding the company’s interest beyond beer.

All of those moves occurred while the company drove behind a “Kona plus” strategy that prioritized sales of brands like Longboard Lager and Big Wave over others in the portfolio. Meanwhile, CBA systematically reeled in distribution of Widmer and Redhook, retrenching to the Pacific Northwest.

And while all of this was going on, A-B was sorting out its $100 billion takeover of global rival SABMiller. When a federal judge finally cleared the transaction in late October of 2018, many industry observers believed that a purchase of CBA would be next.

What many failed to consider at the time, however, was that the bond between A-B and CBA had strengthened considerably since 2016 in part because Thomas had found an ally in Felipe Szpigel, then president of A-B’s craft division.

In October 2018, Szpigel announced plans to leave A-B and form his own drinks venture. That meant Thomas had less than a year to convince newly appointed A-B craft president Marcelo “Mika” Michaelis of the benefits of making a qualifying offer.

“One of the challenges is that corporations are influenced by the people running them,” he told Forbes. “Felipe and Mika are two completely different individuals, but they are both good people.”

Throughout 2019, Thomas fielded hundreds of questions about the likelihood of a deal with A-B. Analysts, journalists, employees, and shareholders were all interested in knowing what the future held.

In May, following an announcement that Boston Beer would acquire the popular Delaware craft brewery Dogfish Head for $300 million, a minority shareholder sent a letter to CBA’s board urging them to consider a sale.

At the same time, overall sales of craft were beginning to slow as drinkers traded beer for hard seltzer.

“With the combined effects of the trends in [the] craft beer industry and CBA’s inherent challenges to grow revenue, profitability and cash flow, we strongly believe that the company must seek a sale to maximize shareholder value,” wrote David Cohen, the founder of Boston-based private investment fund Midwood Capital Management LLC.

Then, just 16 days before the August 23 deadline, A-B announced the acquisition of fast-growing Ohio-based craft brewery Platform Beer. For some, this signaled that a deal with CBA wasn’t happening.

August 23 arrived, and instead of paying more than $320 million ($24.50/share) to buy CBA, the world’s largest beer company opted to spend $20 million as part of a previously negotiated fee for not submitting a qualified offer before the deadline.

Some viewed A-B’s decision to pass as an admission that CBA and its brands were not worth buying. Beer writer Jeff Alworth, who penned a book on the history of Widmer Brothers called The Widmer Way, said he was personally happy that no deal was struck and claimed that a buyout would be bad for the Portland beer scene.

“Under AB InBev management that brewery and the Widmer brand would become line items on a sheet of thousands, overseen by someone in New York or Leuven — or who knows where. Certainly no place that cares about Portland’s brewing heritage,” he wrote at the time.

While Alworth raised pints of Widmer Hefe in celebration of the news, Thomas — who took over as the CEO of CBA in 2014 after serving for three years as the president of commercial operations – expressed his frustration in a prepared statement.

“While disappointing, with this decision made, management can turn its attention to refining strategic alternatives to maximize shareholder value,” he said at the time.

It was a potential career-defining moment that Thomas had spent years architecting. And after waiting for A-B to pop the proverbial question, Thomas was now faced with the hard reality of having to reenter the dating pool. The challenge, of course, would be figuring out how to manage a mixed bag of beer brands that were deeply embedded within the A-B wholesaler network.

Ultimately, Thomas and Michaelis knew the two companies were stronger together than they were apart, but not at $24.50 a share. Over the next eight weeks, the pair negotiated an acquisition price that amounts to a roughly $107 million discount for A-B (not including the $20 million payment).

When asked if he believed Michaelis’ strategy was to cut down the cost of an acquisition all along, Thomas deployed another metaphor.

“It’s just like putting your house on the market,” he said. “You might think it is worth one number, and you can put it out there, but it might not be reality.”

So, while the value of CBA might fluctuate based on what a buyer is actually willing to pay, what’s certain is the fact that today’s beer market looks much different than it did back in 2016 when the two companies initially restructured their commercial operating agreement. The craft category grew 12 percent in 2015, the same year a pair of blockbuster deals were struck – Ballast Point was sold to Constellation Brands for $1 billion, and Lagunitas sold a 50% stake to Heineken in a deal believed to be worth $500 million.

Those realities are not the case today. Craft sales grew just 4 percent last year, and valuations have steadily dropped since Ballast Point was sold. Both Thomas and Michaelis recognized this when they came back to the negotiating table.

“There was opportunity to re-envision how we put this together, because lot has changed since 2016 and we don’t live in the same world we lived in then,” Thomas said.

In the end, all of the stakeholders will get something they want. A-B will get a stable of strong craft brands at a fair price, CBA shareholders will get the liquidity event they’ve wanted for a long time, Thomas will finally get to stop answering questions about the company’s future, and A-B wholesalers will get more clarity around brand priorities.

Indeed, if the deal is approved, CBA will finally be fully-integrated into the A-B family – even if that integration was more arranged marriage than love at first sight.