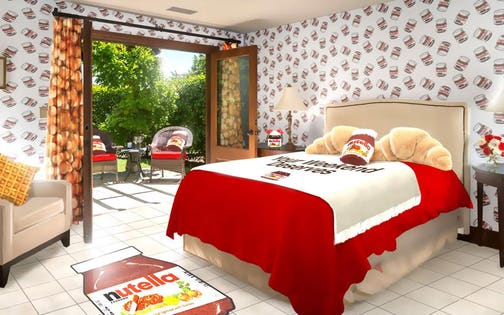 If you’ve ever wanted to profess your undying love and devotion for Nutella, well now’s your chance. According to an announcement made this week, the world’s most popular Italian chocolate-hazelnut brand will be opening up a pop-up hotel in Napa Valley this January and you could be among one of three lucky winners to get in on all the action.

According to a press release, the ‘Hotella Nutella Weekend Breakfast Experience,’ includes roundtrip airfare for you and guest as well as accommodations for three days and two nights for “one of a kind creative breakfast experiences with notable tastemakers.”

All you need to do is submit a short video that’s :60 seconds or less that demonstrates how Nutella makes your morning special.

According to the contest rules, judging will be based on your “passion for Nutella hazelnut spread,” as well “originality, creativity, and how it all relates to morning and/or breakfast.” All video submissions must be received by midnight on December 8, 2019.

According to a report by the Napa Valley Register, the Hotella will actually be located in a private residence that will be transformed into a hotel like experience. Among other Nutella related activities, Food Network star and Iron Chef Geoffrey Zakarian has signed on to teach the lucky winners how to optimize their breakfast for dinner options among other TV personalities and surprises.

The Nutella pop up follows in the footsteps of food brands looking to drum up a little publicity in the form of delicious giveaways. Last August, Taco Bell opened up a pop up hotel in Palm Springs which sold out in less than two minutes according to the fast food chain.

You can learn more about the contest and apply for a chance to win here.

The best après ski in Crans-Montana
10 best cross-country skiing resorts in North America, according to readers
Here’s how to get a visa to visit India
This Luxury Connecticut Resort Offers Spectacular Waterfront Views
Delta pilots would get more than 30% in pay raises under new contract deal