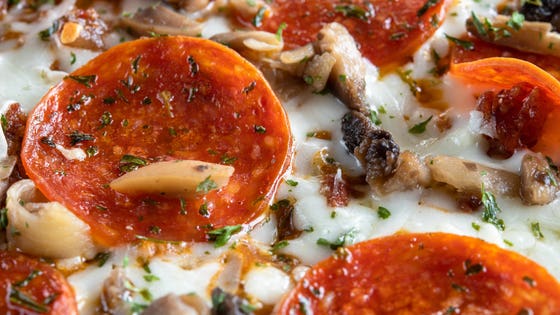 If you want to make your pizza a sausage fest, you may want to take heed of this U.S. Department of Agriculture (USDA) announcement. Ezzo Sausage Company, based in Columbus, Ohio, is recalling approximately 25,115 pounds of its “ready-to-eat” sausage products.

Turns out that they didn’t want consumers to be ready-to-eat Listeria monocytogenes. Some of the products produced on October 29, October 30, and November 5, 2019 may have been contaminated with this bleepy bacteria. The list of products affected by the recall includes pizza toppings such as sliced sausage and pepperoni such as:

So far, there have been no confirmed illnesses from eating any of the products. However, the link between the sausages and Listeria occurred when testing by the USDA Food Safety and Inspection Service (FSIS) was positive for the bacteria.

Oh Mann, wasn’t it just two weeks ago that I was writing about Listeria for Forbes? Back then it was Mann Packing Co., Inc. voluntarily recalling over a hundred types of its vegetable products. If you are wondering what’s the wurst that could happen if you were to eat sausages with a splash of Listeria, read what I wrote previously. Listeria will typically hit you right in the gut, resulting in fever, diarrhea, and a general poopy feeling. However, if the bacteria gets into your blood stream or central nervous system, it can be life threatening. It can also cause miscarriages, premature deliveries, stillbirths, and infections in the newborn if you happen to be pregnant.

So check your sausage. And your pepperoni. If you have any of the products appearing on the USDA list do not serve them to others. That could be a very poopy thing to do, in more ways than one. Either throw them away in a safe location or return them.

As I have written before on many an occasion, such as earlier this month, the past two years have been particularly bad for reports of food contamination. Yes, before 2017, you probably never sausage a surge of food safety issues.