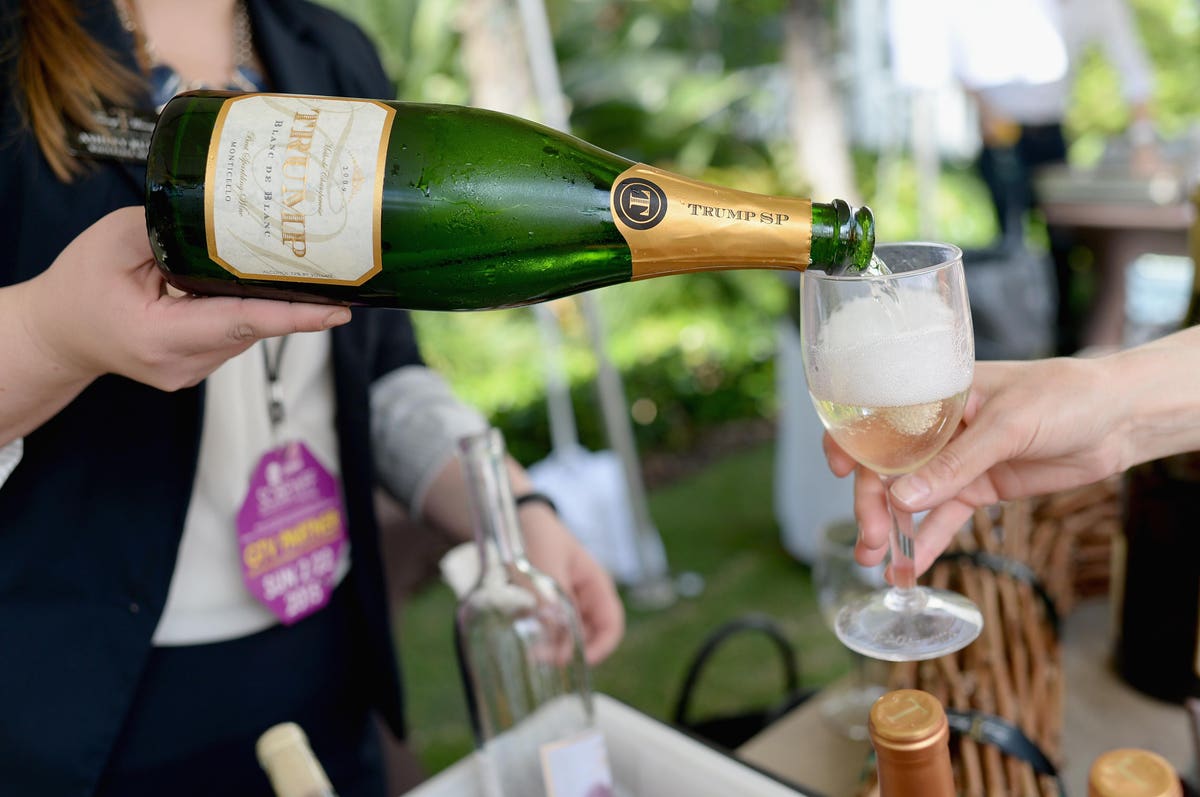 Donald Trump was in Lake Charles, Louisiana over the weekend to survey the devastation left in the wake of Hurricane Laura. The Category 4 storm made landfall there last Thursday killing at least 14 along the Louisiana coast. An estimated 80,000 residents are still without electricity and might not see their lights turn back on for weeks.

Following a press conference the president asked his staff for a pen and waved over a few local law enforcement agents. “Come here fellas, get over here, I want a little power,” he said to them before gifting out autographed pieces of paper. “Here, sell this tonight on eBay, you’ll get $10,000.”

If that’s truly the going rate for his signature these days, then we’ve spotted quite a deal for our readers. Stephen Koschal, a Colorado-based authenticator who specializes in ‘quality autographs and signed books’ is currently selling a bottle of unopened Trump wine for just $195.

The 2013 vintage Sauvignon Blanc is from the president’s winery outside of Charlottesville, Virginia—in the Monticello viticultural area (AVA). Wine.com currently estimates this particular juice at $24, though the site offers nothing else by way of rating or tasting notes. The winery itself has collected a handful of prestigious awards throughout the past decade including multiple medals at the San Francisco International Wine Competition.

Here’s what Koschal has to say specifically about his fermented juice-turned-political paraphernalia: “Wine label hand-signed, in person by Donald Trump during his visit to Colorado Springs, Colorado while on the [2016] campaign trail. Only the second, signed wine label we have handled.”

A photo of the label in question appears under the listing. It seems to have been signed in quite a cursory manner. The merchant of course couldn’t resist the opportunity to squeeze out an oenologically-themed pun. “Make America Grape Again,” is how he titles the entry, which you can view here.

Little other details are provided as to what this Virginia-born wine was even doing in Colorado Springs at the time that Trump happened to pass through, a couple of years after its bottling. And, in fact, Koschal is ambiguous enough in his wording that we’re not even sure if it’s even a bottle that he’s selling and not just a detached label. Although describing the item as a “wonderful un-used ‘Trump, 2013, Sauvignon Blanc, Monticello’ wine,” would certainly be a weird set of descriptors for a piece of paper. We reached out to him for comment, but have yet to hear back.

Even still, as Trump suggests in the video clip below, just the mere piece of paper should command at least 50x Koschal’s asking price. So if you’re inclined to believe the president, now’s your chance to snag the steal of the century. In the world of wine, especially, deals like this don’t come around very often.

And if you’re not lucky enough to score a signed specimen, fret not: There’s still ample opportunity to be subjected to a ‘Taste of Trump’—an $80 bundle of the winery’s chardonnay, sparkling blanc de blanc, and 2017 meritage, available through its website.