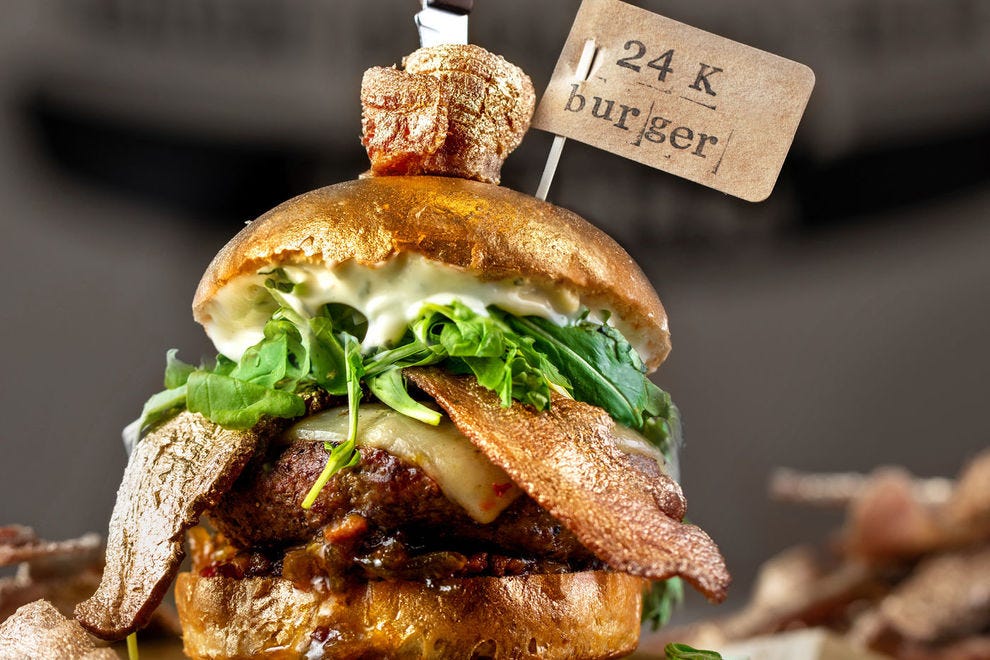 The potential of bacon is limitless. It can be a main course or a side. Bacon can be cut into bits for added texture and flavor, or even covered in chocolate and served as a sweet dessert. Bacon is a beloved meat that when people love it – they really love it!

So all you bacon lovers out there, chart the course and hit up these spots to indulge in some of America’s most unique bacon dishes.

Don’t knock it until you try it. The sweet glaze atop the Canadian Healthcare donut pairs perfectly with the strip of crispy, salty bacon. This mouthwatering delight isn’t the only bacon-forward donut at Hypnotic Donuts, though.

The Evil Elvis takes essence of The King’s favorite sandwich (the legendary banana and peanut butter) and brings it together with bacon on a glazed donut. Sweet dreams are made of these.

Dusted with 24-karat gold, this might actually be the richest bacon you’ve ever tried — Photo courtesy of Slater’s 50/50

Slater’s 50/50’s 24 Karat Burger is Las Vegas dreams on a bun. The ½-pound patty made of Wagyu beef is topped with “billionaire” bacon that’s dusted with 24 karat gold. It also comes with a decadent truffle cheese, arugula and bacon jam, all nestled in a 24-karat gold-dusted brioche bun.

Roses are red, and violets are blue, but nothing says true love like the bacon bouquet from Bacon Bacon, a restaurant that loves bacon so much, they used the name twice. It’s hard not to swoon over a bouquet of crispy bacon, but your special somebody might go head over heels for their chocolate-covered bacon.

To those who have never tried bacon and chocolate together, it’s a combo that you must experience at least once in your life. The saltiness amplifies the chocolate, and texture-wise, there’s nothing more satisfying then biting into soft chocolate with a slightly gooey, salty, mildly crunchy bacon center.

There are a lot of ways to dress up popcorn, and at Bacon Bros. Public House in Greenville, South Carolina, they’ve picked the best topping possible for their caramel popcorn: bacon. Bits of bacon stick to the gooey caramel-covered kernels to create a treat with layered flavors and textures. It’s perfect as a starter or to nibble on over a couple of beers.

At Abe and Louie’s in Boston, you don’t ask for a side of bacon, you ask for THE bacon. This starter consists of thick cuts of bacon topped with crumbled blue cheese. It’s served alongside whole grain mustard and peppadew relish, so you can mix and match every bite of this exciting dish. It’s an appetizer so delicious and decadent, it can stand on its own.

The Kentucky Hot Brown is a dish of legend created at none other than the Brown Hotel, a Louisville institution. This comfort food is made of Texas toast topped with turkey breast and Mornay sauce, and adorned with bacon. It’s a plate so rich and filling, it can be eaten morning, noon or night.

This cheese pull action is perfect for the ‘gram! — Photo courtesy of Ryan J. Howe

The creative culinary geniuses of Holy Donut in Portland, Maine have figured out a way to turn a donut into a savory, Hot Pocket-esque sandwich. Behold: the Bacon Cheddar Donut, a donut filled with bacon bits suspended in the middle of a donut held together with slightly melted cheddar cheese. You may not be able to only have one, so order a dozen!

In 2015, UNESCO named Tucson, Arizona a Creative City of Gastronomy for its agricultural history and layered culinary tradition. The bacon-wrapped Sonoran Hot Dog is a dish that’s part of that rich culinary tapestry. In 2018, El Guero Canelo’s Sonoran Hot Dogs earned the restaurant recognition as an American Classic by the James Beard Awards.

It may seem like a simple breakfast, but when constructed with care and executed with intention, a bacon, egg and cheese biscuit can be a memorable meal. The biscuit breakfast sandwich at Milwaukie Café is one of those meals.

The classiest way to enjoy bacon is with an Old Fashioned — Photo courtesy of Rebecca W. Simms

Ordering an Old Fashioned is a statement. It’s a way of telling everyone around you that you need a stiff drink. The Old Fashioned at Lazy Dog comes with a peppered strip of smoked maple bacon, which is probably the classiest way bacon could ever be served.

The molasses essence of the Old Fashioned brings out the peppery and maple notes of the bacon, creating a cocktail that also doubles as a bar snack.