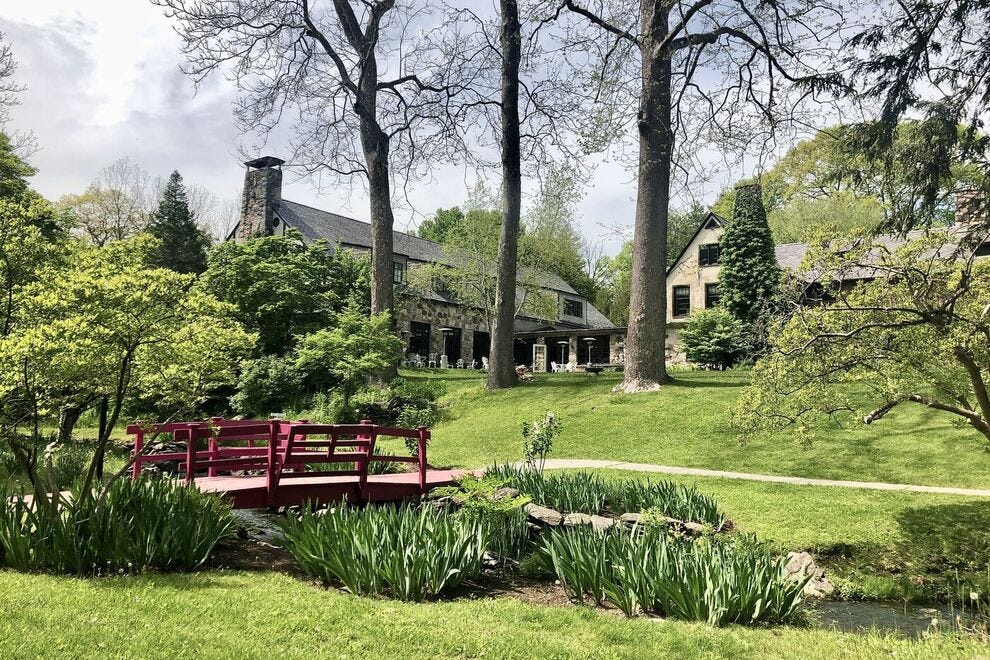 Whether it’s Manhattan or Brooklyn, remote Niagara or genteel Westchester, the bucolic Hudson Valley or the far reaches of Long Island, New York State offers sumptuous, romantic hotels and resorts to suit all tastes. Here are 10 places to consider for your next romantic retreat.

Located on remote West Gate Drive in leafy Huntington in mid-Long Island, this legendary mansion, the second largest private home in America when it was built in 1919, is a dreamy, French-styled mansion. The walled, cobblestoned courtyard leads to the entrance hall where a stone horseshoe staircase unfurls, modeled after one at Fontainebleau in France.

Located on West 33rd Street in the new Manhattan West development in the far reaches of Midtown West, this luxury boutique hotel is perfectly positioned for the ultimate city stay. Explore Manhattan West’s and adjacent Hudson Yards’ superb dining and shopping. Take in spectacular views from Edge, the open-air observation deck 100 floors up at 30 Hudson Yards. Then, relax in Pendry’s cosseting service and soak in the warm, modern design of this 23-story tower.

Located in the beautiful Hudson Valley, this incredibly picturesque English-styled manor house is a country retreat surrounded by natural, landscaped grounds. Rooms and suites are located in the main house, which dates to 1920; in the more secluded Garden House, a later addition behind the idyllic original walled garden; and in the small 250-year-old Century Lodge, originally a tavern and now bookable as a private retreat, complete with kitchen and living room.

Troutbeck has lots of playful activities, including tennis courts, an outdoor pool with food and drinks service, and hiking and walking trails through its 250 acres. Perhaps best of all, The Barns spa offers daily classes and wondrous treatments, including the trauma- and stress-combating Somatic Experiencing. Lie back in one of the many hammocks dotted about the property and enjoy only birdsong as background noise. Complete the day with a tasty meal inspired by local and on-property foraged ingredients.

The stunning, sparkling Baccarat Hotel New York is named for the French luxury crystal maker, and its design is inspired by the lauded company’s sought-after goods. Oversized crystal chandeliers catch the eye throughout the lobby, the Grand Salon dining room and the sultry-toned bar. Uniquely, in the guest rooms and suites, bedside phones include a “champagne button” for prompt provision of that most romantic of wines.

For all its design grandeur, the hotel feels intimate – a suave love nest in the heart of bustling Manhattan. Book a couples massage in Spa de La Mer and a private cabana by the glamorous indoor pool. Lovers may even enjoy the city’s very best dining right there in the hotel’s Grand Salon, which is overseen by two Michelin-starred chef Gabriel Kreuther, whose namesake restaurant – Gabriel Kreuther – is located nearby, across from Bryant Park.

Bar at The Maker — Photo courtesy of Linda Laban

It might be located in once-industrial Hudson, 120 miles north of Manhattan, but this is the place to party. This eye-catching boutique hotel pairs La Belle Epoque with La Boheme, with the result spread throughout a three-building complex rooted in a restored grand Georgian home in the center of artsy Hudson. Explore Warren Street, where art browsing meets artisan shopping, often in the same fetching storefront.

The Maker includes a cafe straight from a Montmartre storybook; a palm-lined conservatory restaurant; a bar and lounge that can only be described as super-sexy, and an outside patio overlooking the guest-only seasonal pool. Rooms are each individually curated with unique art and furnishings. Choose an attic-level penthouse with a private outdoor terrace with day beds, perfect for a more private party, or just plain relaxing.

Storied Sag Harbor sits on the most eastern tip of Long Island, just north of the fabled ritzy Hamptons, at the mouth of the Atlantic Ocean. Though Baron’s Cove was built in the 1950s, a 21st-century renovation saw it reopened as a modern luxury resort with a nautically inspired lobby, and a bar and lounge with cozy wood-burning fireplaces.

The restaurant gives water views of the harbor, and the luxurious guest rooms offer a choice of vistas: either with private garden terraces or harbor loft suites with balconies. Relax by the harborside heated saltwater pool, play tennis and enjoy spa services. Explore Main Street, where this iconic boating town’s restaurants and shops provide gentle indulgence.

Guest room at The Point — Photo courtesy of Linda Laban

If solitude together amongst nature be the stuff of love, this is the most romantic spot you’ll find. Dating to the early 1930s, this private lakefront Adirondack estate on Upper Saranac Lake was originally built as a so-called great camp for William Avery Rockefeller II. Rustic luxury is still what dominates now that The Point is a resort. A discreet, exclusive resort, that is, with only 11 guest rooms located in the main lodge and in four original log buildings.

Furnished in period style, including many original Rockefeller antiques, and surrounded by the stillness of the forest, simple pleasures are matched by the very best service and finest food and wines. There are no TVs and Wi-Fi only in the main office outbuilding. Whether it’s relaxing by the bonfire on the promontory overlooking the lake, boating in a vintage yacht or hiking to Camp David (a cabin serving fireside cocktails), being in the middle of this very special nowhere is not exactly roughing it.

Set at the foot of the Hudson Highlands, an hour’s drive north of Manhattan, and overlooking the mighty Hudson River, the Abbey Inn and Spa was repurposed from the former Episcopal Sisters of Saint Mary’s Convent, situated on historic Fort Hill.

The property brings 42 luxurious rooms and suites to this village off the Croton Expressway. It also adds the Mediterranean-inspired Apropos Restaurant & Bar, whose menus are directed by Hudson Valley farms and the changing seasons.

The spa, a 2,500-square-foot sanctuary, also favors local products, and offers a hair and nail salon, saunas and hot tubs and a tranquil relaxation room where you may await a sumptuous massage, taken together or not. Explore the surrounding historic old Dutch country and stroll Peekskill’s waterfront and the town’s dining and entertainment.

Niagara Falls is known as the honeymoon capital of the world, and Niagara Falls USA, the town not on the Canadian side of this wondrous water feature, includes this beautiful hotel built for romance. Actually, what is now The Giacomo Hotel was built in 1929 as the United Office Building (once the largest skyscraper in Niagara Falls), and designed in an Art Deco-era Mayan Revival architectural style.

It’s now a luxury boutique hotel with guest rooms boasting Whirlpool baths, fireplaces and, if you ask nicely, views of the Upper Niagara rapids. Relax over cocktails in the Giacomo Lounge before enjoying a downtown restaurant for dinner. The Giacomo includes a bedtime snack of warm cookies and cold milk, delivered right to your room, as an inclusive treat for all guests.

The Inns of Aurora – Aurora

This most unique development of five impeccably restored historic homes by Cayuga Lake in Upstate New York also includes shops and restaurants, all of which make up a storybook village, set apart from the daily grind. Guest rooms boast a private balcony to fully take in views of the lake.

Enjoy the bespoke Spa at the Inns of Aurora, a healing and wellness center offering classes and Ayurveda-inspired treatments. After a day’s outdoor activity, a farm-to-table candlelight dinner at 1833 Kitchen & Bar, the property’s main restaurant led by chef Eric Lamphere, may be followed by s’mores and a nightcap by the lakefront fire pit, where stargazing is recommended.