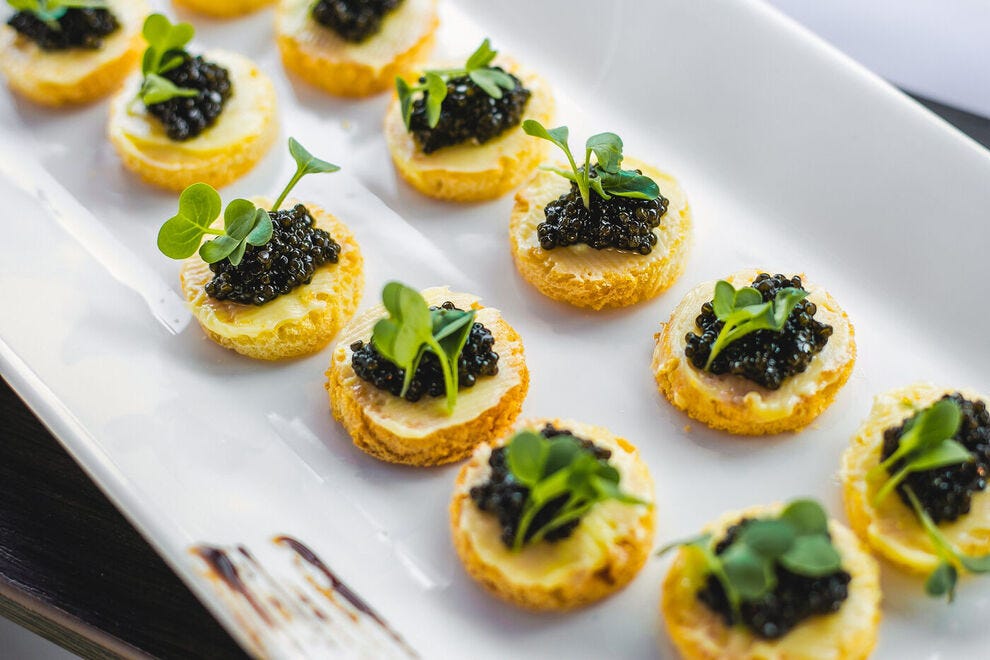 When it comes to luxury dining, there’s no denying that caviar is king. This rich delicacy has been a staple in royal feasts and high-end gatherings for centuries. In the modern era, the popularity of this long sought-after dish is just as strong as ever – though sustainability has become an increasingly present topic when discussing global caviar production.

The crux of the issue lies within the caviar harvesting process. In most cases, the mother sturgeon – a type of large plate-covered fish – is killed, her eggs then harvested from the ovaries to be turned into caviar. In decades past, this method coupled with rampant demand for caviar led to widespread culling of the fish across the globe, with coveted species like the beluga sturgeon driven to the very brink of extinction.

“In early 2009, we first started thinking about ‘experiential luxury’ while on an annual visit to the island of Lamu off the coast of Kenya,” says Du Cane, co-founder of the U.S.-based Pointy Snout Caviar. “We had explored the concept while also studying the effects of pollution on potable water (relevant in that region), which led to our understanding of the additional ecological crisis in the Caspian Sea, where poaching (coupled with pollution) had led to the decimation of wild sturgeon populations. We saw an opportunity to bring greater awareness of the disaster by bringing to the U.S. market a broader understanding of caviar, its history and origins.”

Since the company’s launch in 2011, Pointy Snout has embraced sustainability through all steps of the caviar production process, from mature mother sturgeon to freshly harvested roe. Aside from the obvious – all caviar must be farm-raised, as wild-caught caviar is not just devastating to native sturgeon populations but also illegal – the company also works to ensure that the farms themselves are operating with sustainability at the forefront. That means utilizing multiple programs, ranging from on-property water recycling to rearing sturgeon fry for release to bolster numbers in the wild.

“The Monterey Bay Aquarium’s principal definition of aquafarming sustainability is the achievement of a feed ratio of 1:1, meaning 1 pound of wild fish is used to grow 1 pound of farmed fish. The best sturgeon farmers operate at or near this 1:1 ratio,” says Du Cane. “Some not-so-sustainable salmon operations utilize 5 pounds of wild fish to grow 1 pound of salmon. Finally, sustainable operators often reintroduce disease-free, farm-raised sturgeon small fry back into the wild population.”

Though the sustainable caviar industry has operated without any serious hiccups for the past few decades, the COVID-19 pandemic certainly threw a wrench into operations. Du Cane notes the large level of uncertainty that shrouded production for the past few years.

As restaurants and hotel operations ceased temporarily, demand for caviar fluctuated wildly and farms across the globe shut down production, which ultimately yielded a caviar shortage as restaurants returned to normal service. Caviar demand has become more predictable today, but in the meantime, Du Cane cites climate change as an always-present issue, with temperature fluctuations and environmental degradation occurring in waterways across Europe.

Though caviar has been embraced worldwide for its rich flavor and high degree of social capital, it’s important that consumers respect the food’s humble beginnings – the sturgeon, to be precise. Often referred to as a “living fossil,” this family of fish has been navigating the earth’s waterways for roughly 200 million years, with 27 distinct species still alive today.

Decades of human interaction may have brought sturgeon populations to a historic low, but with sustainability-driven companies like Pointy Snout at the helm, humanity will be able to enjoy fresh caviar for the foreseeable future. And speaking of enjoying caviar, it’s best to keep your recipes simple.

“Our choice for the single best food combo with great caviar is…nothing,” says Du Cane. “Eat it plain, unadorned, straight from the tin with a non-metallic spoon. But we’re not idealogues. Many people like to pair caviar with food, and we’re happy with that too. Our favorites are the most simple: a toasted brioche round topped with crème fraîche, a dollop of caviar and a sprig of microgreen. Yukon Gold fingerling potatoes, sliced or halved, are a wonderful vehicle for crème fraîche and caviar.”