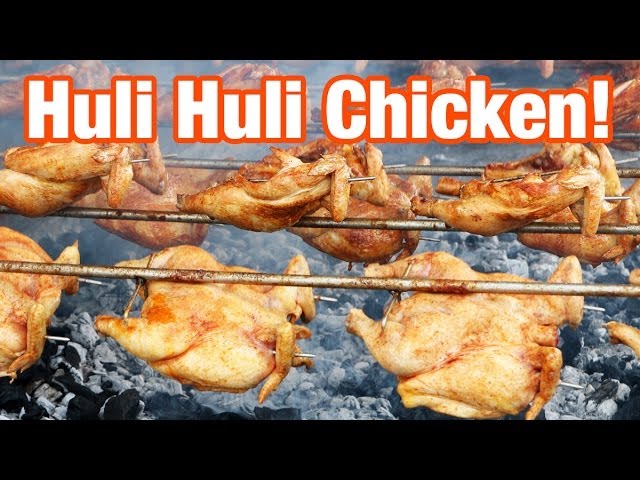 When you visit Haleiwa, Hawaii, there are some great choices for places to eat – there are some nicer high-end dining restaurants – but the places that serve the best food are usually the small hole in the wall spots.

Though it only happens on the weekends Ray’s Kiawe Broiled Chicken, is one of the best places in town, or even on the island of Oahu, to eat the Hawaiian style grilled chicken known as huli huli chicken. On Saturday and Sunday, in the parking lot of the main Malama supermarket in Haleiwa, Ray’s sets up its grilling production. The grill is probably one of the most amazing grills you’ll ever see in your entire life – they literally took an entire truck trailer – and I’m talking the construction sized trailer – and turned it into a massive rotisserie chicken grill. They can literally cook, or shall I say roast, on entire flock of chickens at one time. For food lovers like you and I, their grill is like a trophy of culinary triumph.

Anyway let me get back to the huli huli chicken. To the chicken is first marinated in a combination of pineapple juice, soy sauce, sugar, and some other ingredients and seasonings. This marinade gives the chicken an amazing flavor, that’s not actually too strong, but just subtle, sweet and sour, and of course nice and salty from that soy sauce.

When you arrive to Ray’s Kiawe Broiled Chicken, there’s usually a continuous line, but since most people take away, and since the menu is so concise, the line usually moves very quickly. You really only have a couple of choices of what to eat, you can get a full huli huli chicken, a chopped huli huli chicken, the special sauce, and their pineapple coleslaw. Of course there’s rice also available. I decided to go for the whole chicken, and chopped so that we could eat it immediately, and also a side of the special sauce and pineapple coleslaw. I was actually going to eat right then and there, but unfortunately there were no seats, so I decided to jump back in the car and head to the beach. That chicken smelled amazing.

Kiawe is actually the Hawaiian word for mesquite wood – the chicken is roasted in the fragrant coals and smoke of mesquite – another dimension of flavor. The chicken was cooked to perfection, it was nice and juicy, and a bit oily, but it wasn’t overcooked. The meat was incredibly flavorful and so juicy even the white meat. The special sauce tasted mostly like a combination of soy sauce and a hint of vinegar. That salty and sour flavor on pieces of chicken made it really tasty.

Overall Ray’s Kiawe Broiled Chicken serve some delicious huli huli chicken, and if you happen to be in Haleiwa, Hawaii, on the weekend, it’s worth grabbing a chicken or two for the beach.

Thank you so much for watching this food and travel video by Mark Wiens. Don’t forget to subscribe so you don’t miss my next tasty adventure. You can subscribe right here: http://www.youtube.com/subscription_center?add_user=migrationology