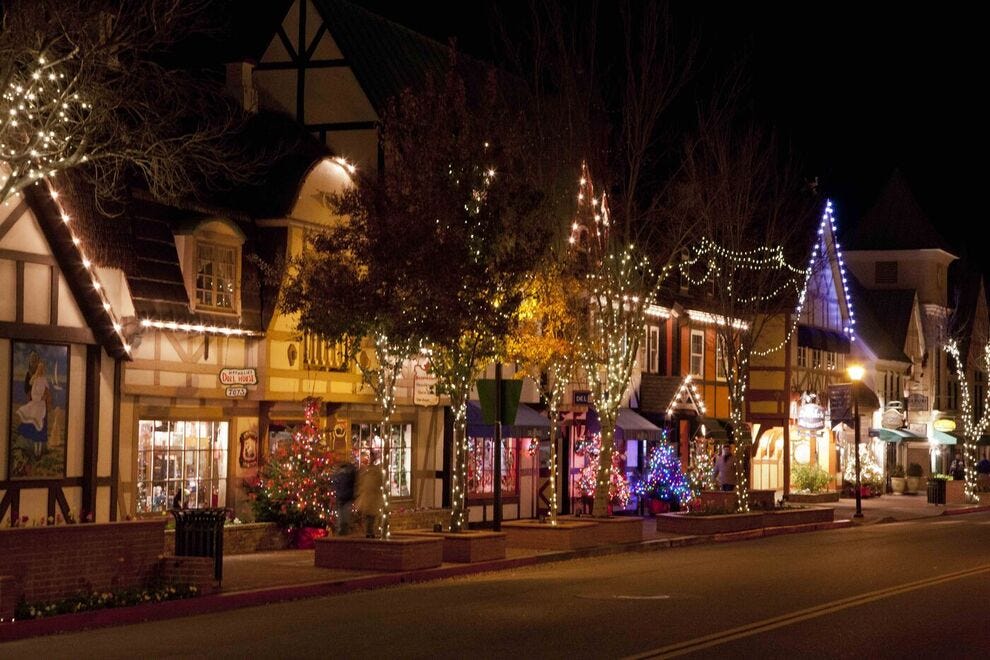 Jing-a-ling-a-ling! It’s that time of year when we share some of the best holiday events around Southern California. And there’s no dearth of options – from boat parades to light shows to holiday-themed studio tours. And best of all, it’s SoCal, so the weather should be cooperative when you’re ready to play under the palms.

For those who haven’t been to Solvang, the magical little town straddling central and Southern California, now is the time. Holiday celebrations in this Danish wonderland are in line with their “Hygge for the Holidays” theme, complete with Danish delicacies (aebleskivers!), Danish-influenced shops and horse-drawn trolley rides.

The nights are illuminated around SoCal all through the holiday season with spectacular light installments, most of which run through January. Some of the more notable include the Enchanted: Forest of Light at Descanso Gardens in La Cañada, Lightscape at the San Diego Botanic Garden, and another Lightscape at the L.A. County Arboretum.

Don’t miss the annual Gay Men’s Chorus of Los Angeles’ holiday spectacular. Their themed shows are a perfect mix of classy and campy, and they’re attended by people of all ages, religions and genders. This year, it’s “A Motown Holiday” at Glendale’s Alex Theatre featuring R&B and pop artist Shanice.

Celebrate the Jewish Festival of Lights with music, storytelling, crafts and tasty treats (latkes! jelly donuts!). The event will feature a variety of musical guests and Skirball storytellers will recount the age-old story of Hanukkah before a sunset candle lighting.

What better time to indulge in afternoon tea than during the holidays? A number of upscale properties are offering special holiday tea experiences, including The Montage Laguna Beach and the Teddy Bear Tea at The Langham Pasadena, the latter including a take-home teddy bear. Or raise a glass of Laurent-Perrier Champagne at The Peninsula in Beverly Hills, as part of their December Holiday Afternoon Tea where a portion of proceeds are donated to Easterseals Southern California.

Looking for something that’s truly Instagram-ready? Check out the limited-time Holidays Made Here Studio Tour in Burbank where “Gilmore Girls” fans can jump into holiday scenes around Stars Hollow.

Three big zoos in Southern California are all onboard with festive light installations that come alive when most of their four-legged residents go to sleep. These include the popular LA Zoo Lights: Animals Aglow (Nov. 18 – Jan. 22), the first-ever zoo lights at the Santa Barbara Zoo (Nov. 3 – Jan. 15) and the best-named Jungle Bells at the San Diego Zoo (Dec. 9 – Jan. 1).

Celebrate Kuumba – the Kwanzaa principle of creativity – with storytelling, songs, puppetry and more during this Kwanzaa Celebration at the California African American Museum in downtown LA. Teaching artists from Able ARTS Work, a nonprofit organization offering opportunities in the creative arts for people of all abilities, will also lead a workshop to inspire participants to display their own Kuumba spirit.

Downtown Anaheim’s Muzeo Museum and Cultural Center is bringing back their Muzeo Express holiday exhibit featuring whimsical model trains and scenes from well-known movies, such as “The Polar Express” and Radiator Springs from Disney’s “Cars.” Certain evenings will also offer readings or showings of these classics with free treats and hot chocolate.

The annual Las Posadas Christmas tradition on Olvera Street features merchants and their families walking through El Pueblo de Los Angeles (considered the birthplace of Los Angeles, by the way) in a ceremonial reenactment of Joseph and Mary’s nine-night search for sanctuary.