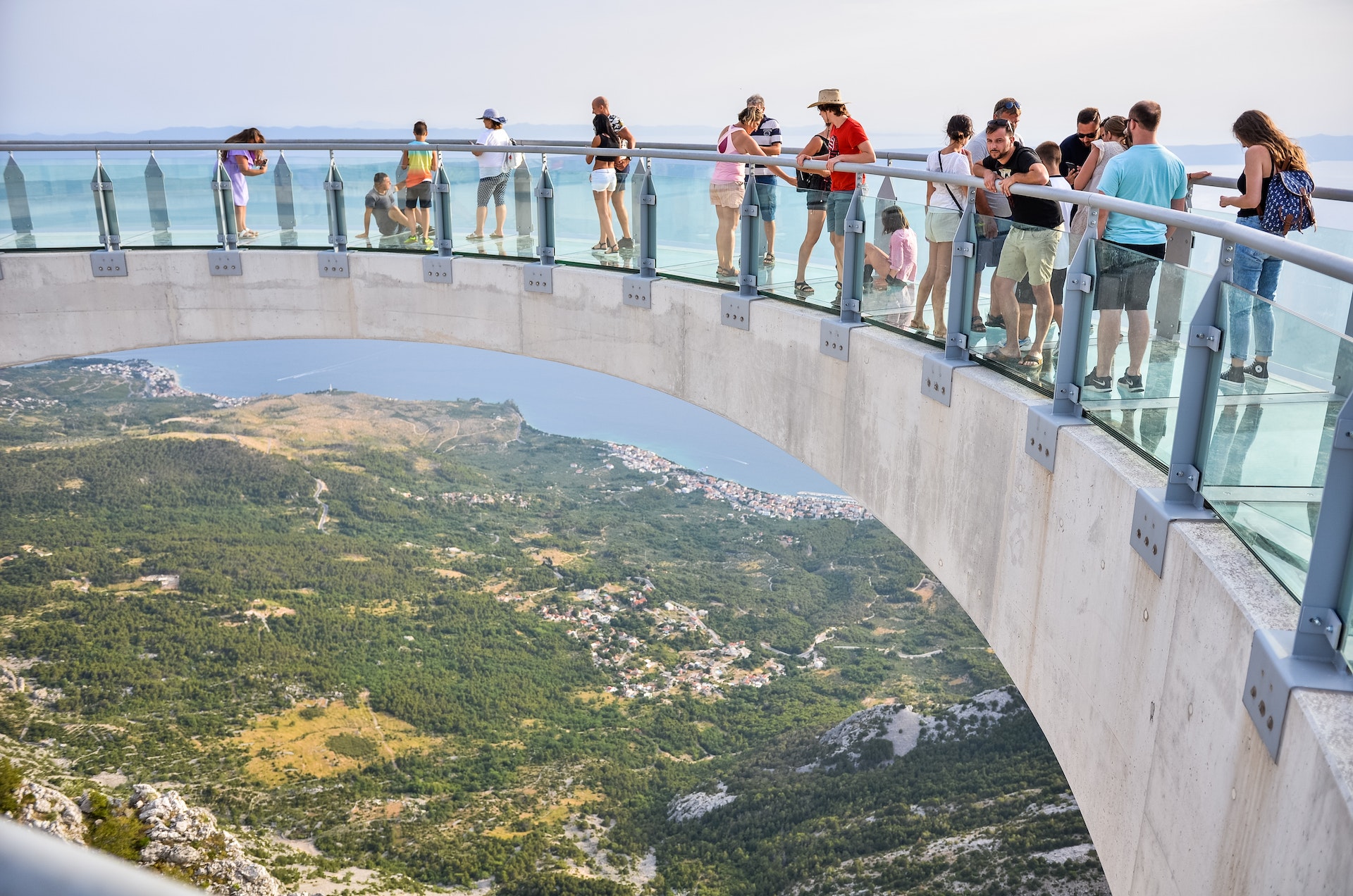 There’s much more to Croatia than its glittering Adriatic coast. While you absolutely shouldn’t miss all those dazzling islands and the beauty of Dubrovnik and Split, the country also offers sophisticated culture in Zagreb, baroque beauty in Varaždin and a range of landscapes throughout the country that promise both beautiful views and hair-raising adventures.

As you plan your trip to this magical destination, keep in mind our list of the best things to do in Croatia.

Make the most out of every adventure with help from our weekly newsletter delivered to your inbox.

Sixteen lakes and countless waterfalls make walking through Plitvice Lakes National Park a dreamy experience. Over centuries, this travertine landscape has created a vivid world of shallow lakes and waterways shaded by beech forests, with every shade of blue and green reflected in its mesmerizingly clear waters. Follow the footpaths – many of them on raised wooden walkways – until you reach Kozjak Lake, where an electric boat awaits to take you across the glass-like water.

2. Get lost at Diocletian’s Palace in Split

It’s not often you see a Roman palace become such a fundamental and lived-in part of a city. The palace the Roman emperor Diocletian built for himself in the 2nd century CE soon fell into ruin and, by the Middle Ages, had become colonized by apartments and shops. Today, it’s the place to wander and stop for a coffee as you admire graceful columns and arches that are millennia-old.

Want some help? Let Elsewhere plan your next trip.

Often visited as a day trip from Dubrovnik or Korčula, lusciously green Mljet is worth a more leisurely exploration, especially its national park. Taking up nearly a third of the island, the park is dominated by two saltwater lakes fringed with pine-shaded trails, offering plenty of places to stop for a swim. Hike to the top of Montokuc at 256m (840ft) for sublime views while breathing in the scent of Aleppo pines. And don’t miss the chance to take the little ferry to St Mary’s Island for a wander around its church and monastery.

These magnificent medieval and Renaissance ramparts curve around Dubrovnik’s old town for nearly 2km (1.2 miles), leading you up and down stone steps and past hulking forts and defensive towers. Set aside at least 90 minutes to wander along the walls, taking in glorious views of the Adriatic, Lokrum island and the town’s sea of terracotta rooftops while peeking into the gardens and terraces of the houses below. Avoid the crowds by turning up first thing in the morning or late in the afternoon.

Spreading across north-eastern Croatia by the Serbian border, the vast wetlands of Kopački Rit Nature Park offer some of the most serene landscapes in the country. For a wonderfully soothing experience, hop on one of the boats that gently float through this peaceful nature reserve, where the Danube and Drava rivers meet and where the birdlife is quite extraordinary.

You’ll soon discover if you have a head for heights when you step on the glass horseshoe-shaped platform that hovers at 1228m (4029ft) in the Biokovo Nature Park. Surrounded by the stark, barren beauty of the Dinaric Alps, the Skywalk gives you superlative views of the Adriatic, islands in the distance and mountains that loom behind. If you’re feeling fit, you can hike for three hours from the nature park entrance.

Not to be outdone by Plitvice, the waterfalls and forested landscapes of Krka National Park are just as impressive. Start in the village of Skradin, where you’ll pick up the boat service that runs along the Krka River, passing one spectacular waterfall after another. Stop at Skradinski Buk to see one of the most majestic cascades as it tumbles down limestone rocks. Carry on towards the island of Visovac and its enchanting Franciscan monastery.

8. Take a picnic to Lokrum

A 10-minute boat ride from Dubrovnik’s Old Port takes you to a totally different world. Little Lokrum manages to squeeze in a Benedictine monastery, a Napoleonic fort, a botanical garden, a couple of bars and a restaurant – plus a saltwater lagoon and several rocky beaches. Pick up some picnic snacks from the bakery by the pier and prepare to spend a few hours exploring – or just lazing about.

Built around the end of the 1st century BCE, Pula’s enormous Roman amphitheater – the sixth largest surviving one in the world – is remarkably well preserved. Check out the lower chambers, where instead of gladiators and caged animals, you’ll find displays harking back to Istria’s Roman-era wine-making tradition. It’s one of Croatia’s most atmospheric concert venues, particularly during the annual summertime Pula Film Festival.

Drive along Pelješac, the long finger-shaped peninsula that veers away from the Adriatic coast north of Dubrovnik, and you’ll soon be surrounded by scrubby hillsides covered in vineyards. Look out for the signs inviting you to come and taste some seriously good wines made by boutique wineries throughout the area. Red wine is king here, notably the robust plavac mali and dingač grape varieties.

There’s a good reason why Starbucks hasn’t been able to get a toehold in Croatia. Coffee is the lifeblood of this place, and it goes hand in hand with the need to share some good gossip rather than burying your head in your laptop. And ground zero for this cultural mainstay is Zagreb, where the cafes buzz with the sound of friends regularly meeting over coffee. If you turn up on a Saturday between 10am and 2pm, you can watch the ritual known as špica, when everyone dresses up to the nines just to go from café to café around the main Ban Jelačić Square.

12. Hit the white water in the Zrmanja River Canyon

With Croatia’s dramatic karst landscapes, it’s no surprise that superb rafting opportunities beckon. North of Zadar, the Zrmanja River slices through the limestone to create deep canyons that guarantee an exhilarating experience. Where the Zrmanja meets the Krupa River, there’s even more drama in store, complete with waterfalls and rapids.

Zadar’s history is a particularly rich one, with Roman, Byzantine and Renaissance traces all happily layered together in this beautiful port city, the oldest in Croatia. But the modern world blends in seamlessly when you walk along the seafront and hear the haunting sound of the Sea Organ, an art installation created by Nikola Bašić in which underwater pipes get “played” by the tide. Just next to it is Sun Salutation, a huge circle of glittering panels that light up at night.

14. Get the best view in Hvar Town

Chic Hvar Town, a place of glossy marble streets and glossier cocktail bars, has a few more aces up its sleeve. For one of the best views along the Adriatic, follow the zigzagging path to the citadel – Fortica – which has been standing sentry above the town since the Venetians built it in the 13th century, then strengthened it 300 years later. The view from the top is worth the climb, and, at night, the medieval castle is lit up romantically, inducing sighs.

Briefly the capital of Croatia in the 18th century, Varaždin epitomizes elegance. It’s a riot of rococo and baroque buildings, with beautifully tended gardens and a pedestrianized center that invites relaxed, sauntering strolls. It’s fitting that the city is the setting every September for two weeks of baroque concerts, adding an apt touch of refinement to a truly dignified place.

Christmas Gift!
A 5,000-Year-Old Cheesemaking Tradition In Armenia
Santa Fe, New Mexico: A Sweet Destination for Any Couple
What to eat and drink in Maine
Eat Local If You Want, But Not For Climate Reasons