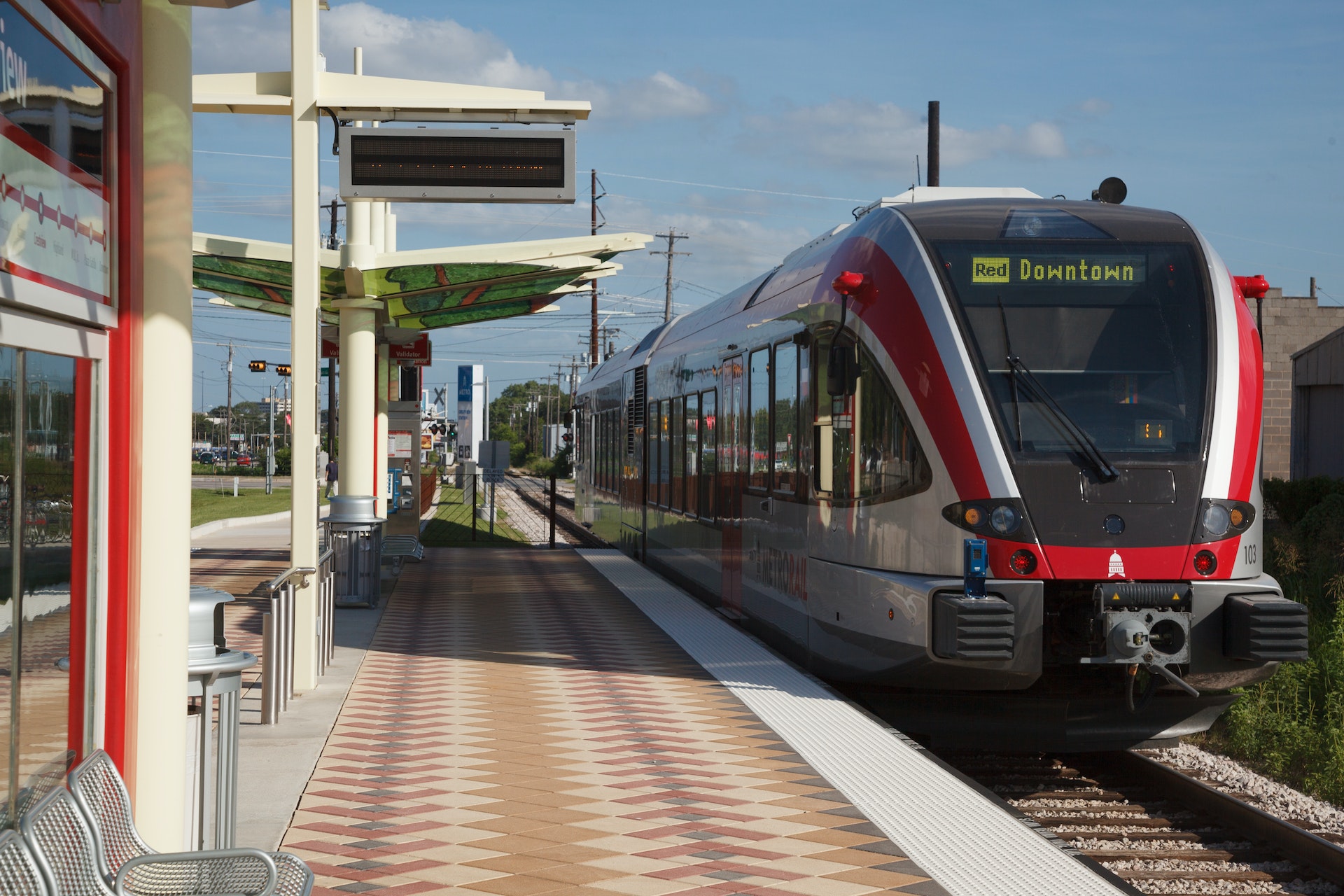 As with many cities in Texas, Austin is very much in thrall to the motor vehicle. The city is large and widespread, and in the summer when the temperature is hot and muggy, it can be difficult to walk from place to place.

A car can make things easier, but not all visitors to Austin arrive in their own vehicle – and even if they did, it’s not the most sustainable or eco-friendly method of travel.

Make your travel budget go a little farther with insider tips from our weekly newsletter delivered to your inbox.

It may not have an underground subway to get you from A to B quickly, but Austin has been doing its best to improve its public and sustainable transportation options, and we have all the deets. Read on for the best ways to explore Austin, whether on foot or by MetroRail, bus or bike.

Stretch your budget by taking the bus

The MetroBus service is the go-to option to see all that Austin has to offer on the cheap. You can get in and around downtown Austin, to and from the airport, out to some of the suburbs, like Round Rock, and around the UT campus, all via MetroBus.

The bus service’s 14 high-frequency routes stop every 15 minutes or less. Even better? Five night-owl routes run from midnight to 3am, Monday through Saturday night, in some of Austin’s most popular neighborhoods, like South Congress, South Lamar and Riverside.

Although the day-pass fares are cheap, you’ll probably get more value from a seven-day pass if you’re staying in Austin for more than three days. Purchase a pass through the CapMetro app to avoid wasting time in the vending-machine queues.

Get there faster on a MetroRapid bus

If you’re in a hurry to get somewhere in Austin, hop on a MetroRapid bus.

Speedier than a regular MetroBus, these Wi-Fi-outfitted buses take transit-priority lanes and get a head start at stop lights, thanks to bus-first signals. More importantly, the MetroRapid is a very limited route that runs north and south, connecting the Domain to Westgate and Tech Ridge to Southpark Meadows and stopping through the University of Texas Campus and downtown Austin.

MetroRapid buses come every 10 to 15 minutes on weekdays and 15 to 20 minutes on Saturdays and Sundays.

Explore North Austin via the MetroRail

In 2022, proposals were set forth for Austin’s first subway system, featuring four subterranean stops connecting South Austin and downtown Austin. It would be a game changer, but until then, you can take advantage of the MetroRail, a 32-mile system with nine stops between downtown and North Austin, ending in the northern suburb of Leander.

The MetroRail doesn’t necessarily stop at the most popular destinations around the city, but that’s where connector buses come in, running passengers from MetroRail stations to major destinations nearby. For instance, the MLK station is serviced by a connector bus that takes riders directly to the University of Texas campus, and Kramer Station’s connector bus goes to the Domain or UT’s Pickle Research Campus.

Tips for taking the MetroRail

Austin’s MetroRail runs from 6:55am to 8:23pm on weekdays and until 1:32am and 1:37am on Fridays and Saturdays, respectively. Free Wi-Fi is available, so you can answer an email as you ride. Fares are cheap and can be purchased via ticket vending machines at each station, or with the CapMetro App.

Kids under 18 ride the MetroRail for free, and military personnel can take advantage of reduced rates

Austin has a reported 215 miles of bike routes throughout the city and offers a map designed to show cyclists which routes are the most comfortable, safe and accessible.

If you don’t have your own wheels, you can always rent a MetroBike. More than 800 bikes (some of which are electric) have been placed at 79 MetroRail and CapMetro bus stations throughout the city – the BCycle app will show you where to find the nearest one.

Hail a ride the Austin way

Rideshare options are numerous in Austin and go well beyond Lyft and Uber. Bird, Lime and Link have scooters placed throughout the city for travelers to use, while the Wheels scooter is a more comfortable “sit-able” scooter option. If you need a ride quickly, you can always call a Lyft or an Uber – both apps offer extensive coverage of the Austin area.

Don’t overlook Austin’s pedicab network either. Essentially a small trailer with seats that is powered by a cyclist, pedicabs are plentiful downtown and in neighborhoods like East Austin and Rainey Street.

Hotel tip: Travelers staying at hotels in downtown Austin might be able to take advantage of the free car services provided by their hotel. For instance, Hotel Zaza provides a free car service to its guests on a first come, first served basis, dropping off and picking up within 3 miles of the hotel until 11pm.

Walk around Austin’s most popular neighborhoods

If you plan your trip right, you can park your car at your hotel and explore parts of Austin on foot, so we’d highly suggest choosing accommodations based on the neighborhood or attractions you’ll most likely want to explore.

The city’s most popular attractions center around downtown, the immediate areas to the east of downtown, and the south side of Lady Bird Lake. If you want to walk to different neighborhoods, staying on the south end of downtown is probably the best option, as you could easily walk to hot spots like Rainey Street or use the bridges to cross Lady Bird Lake to the Zilker neighborhood.

The Ann & Roy Butler Hike-and-Bike Trail connects various neighborhoods together and could shorten your walk. Just remember that Austin can get hot in the summer, so don’t overexert yourself. You can always drive to a neighborhood and then explore on foot.

Parking is widely available in Austin

Because it’s a car city, parking lots and street parking are plentiful in Austin. Just be aware that depending on the neighborhood, you might have to pay. For instance, downtown, West Austin, Central-North, East Austin, Zilker Park, Mueller, parts of South Austin and sections of the Colorado River neighborhood have paid street parking.

Rates range from $2 to $5, and payments can be made via apps on your phone or at pay stations. You can find a paid-parking map here.

Keep in mind that parking is not allowed on 6th St (between Red River and Brazos St) from 9pm to 3am between Thursday and Sunday. Vehicles will be towed from this area during that time.

Austin is working to make the city more accessible, but it’s going to be a multi-decade project. The city of Austin estimates that there are 2700 miles of sidewalks across the city and only about 39% are functionally acceptable, meaning they’re in line with the Americans with Disabilities Act.

Local government has been focusing its attention on renovating sidewalks in high-traffic areas as a priority. The city has installed new crossing signals and curb ramps at intersections to assist those with visual and hearing impairments and those who use mobility devices. This map showcases which intersections have accessible pedestrian signals and/or pedestrian recall.

The MetroBus and MetroRail are ADA-compliant and service a variety of people with disabilities, including wheelchair users. For instance, the MetroBus lowers for easier boarding and has lift or low-floor ramps, and the MetroRail trains provide level boarding at station platforms.

If you have a disability that prevents you from riding the MetroBus or MetroRail, Austin does have an on-demand shared ride service called MetroAccess, but you’ll have to apply well before you arrive. CARTS and the HOP are two other wheelchair-accessible public transportation options; CARTS services regions surrounding Austin, while the HOP focuses on nine county regions north of the city.

The MetroBus, MetroRail, MetroRapid and MetroBike transit systems are all under a single umbrella – the CapMetro pass. Fares differ between the transport services, though, so you’ll have to buy a pass that fits the type of services you want to use.

The MetroBike and Bus Pass can only be used with the MetroBike and MetroBus lines. A Local pass is for MetroBus only, while a Commuter pass lets you use your funds on MetroRail, MetroBus and MetroRapid. Travelers could also buy a $40 stored-value card pass that can be used on any public transportation service until funds are depleted.